World Cup on his mind, Virat Kohli wants India players to manage workload and avoid picking up bad habits during the T20 league.

With the 50-over World Cup being the holy grail, which is a little over three months away, the India captain has spoken about how important it would be not to drift away from the “one-day mould” even during the IPL. (PTI Photo)
The IPL can create “bad habits”. On the eve of the series opener against Australia, Virat Kohli’s has asked India’s World Cup probables to keep a check on that.

Cricketers at times fall prey to the demands of the shortest form, the innovations required, at the expense of their natural game. But with the 50-over World Cup being the holy grail, which is a little over three months away, the India captain has spoken about how important it would be not to drift away from the “one-day mould” even during the IPL. India are starting the series against Australia with two T20 internationals, the first of which will be played in Vizag on Sunday. Five ODIs will follow before the cricketers go into the IPL.

“All the people who are going to be part of the World Cup squad, they have to make sure that their games don’t go too much away from the one-day mould of things. That means we will have to be very wary of the bad habits that might creep in during the IPL. We need 15 people who are confident and mentally happy about where their game is at that particular moment,” Kohli said at the pre-match press conference on Saturday.

He added: “That will take a consistent effort from all the players during the IPL to keep a check on that. The moment we enter the nets and create bad habits, and you lose momentum, you lose batting form, it’s very difficult to get it back in a tournament like the World Cup. So from that point of view, everyone will have to protect that mindset and be aligned towards what the team requires of them.” 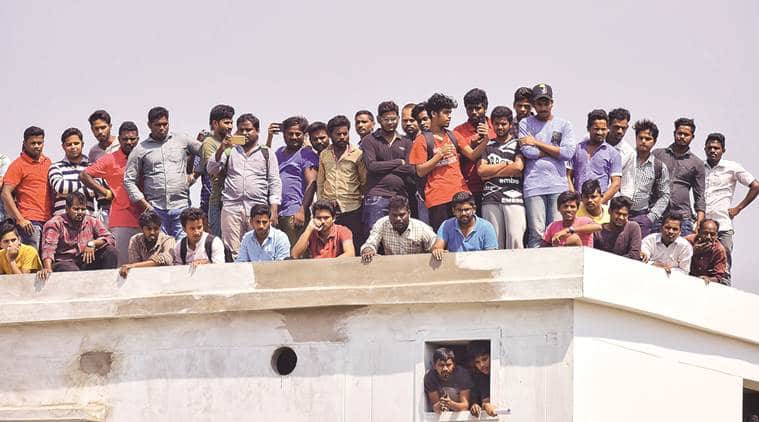 Cricket fans watch Team India’s practice session at Vizag’s ACA–VDCA cricket stadium from a nearby building on Saturday. India take on Australia in the first T20 International here on Sunday.

KL Rahul could be a case in point. He had a blazing IPL last year, where he ended up as the third-highest run-getter — 659 runs from 14 matches at a strike-rate of 158.41. He thrived on a high percentage of aerial shots. But in the 11 Tests since, he has scored 447 runs at an average of 24.83, which is well below his career average of 35.27. Rahul played only three ODIs after the last year’s IPL. There also, he struggled to get going, scoring just 69 runs. His defensive game appears to have become a little loose.

Kohli, meanwhile, moved to workload management and managing practice sessions during the IPL. “Again, the amount you practice, with the amount of travel during the IPL and the number of games in different conditions, in different temperatures, it’s going to be challenging to be honest. But as a cricketer, you have to map out how many practice sessions you really need.

“If you are hitting the ball well, there’s no need to go to a practice session and tire yourself out for three hours, whereas you can utilise that particular phase to rest and recover even more,” he said, adding: “I think those things need to be kept in mind. If your team is in a great position during the tournament, you don’t mind taking two-three games off also.”

Starters before the meal

In a World Cup year, India’s final international assignment before the showpiece event has two T20 internationals to start with. Australia, on the other hand, will play five more ODIs against Pakistan in UAE after this series. England, too, will host Pakistan for a five-match ODI series in May.

Ideally, India should have played an extra ODI or two, given that this is the home stretch of the team’s preparation for the World Cup. Kohli agreed. “That (a few more ODIs) would have been ideal. More, I would say logical. But you know that’s the way series are compiled nowadays and we have to more or less play that.

“Also, because we are playing so much T20 cricket in the IPL…so probably a couple of more one-dayers would have been more beneficial, for both the teams, not just us. But look, we have to utilise what’s in front of us as best as possible. As I said, we are going to look to get into the right kind of frame of mind as a team.”

A good part of the 50-over format is very different to T20 cricket. But the death overs offer similarities. From that perspective, there could be a carry-forward effect. Kohli spoke about that.

“The format is different from 50 overs. So the pace of the game obviously will be different. But just in terms of bowlers executing probably what they will require in death overs in one-dayers, probably that would be the mindset of all the bowlers to execute that. And batsmen as well; you have to hit out in the end. So from that point of view, to get that strike-rate going… Even if we get 30-odd runs which come in quick time, hitting the ball well, you can carry that confidence forward. That’s why game time is important and we are looking at these games purely for that.”

Kohli’s batting pedigree and repertoire allow him to play his natural game across formats. Coming from a lay-off – the skipper took a break after the third ODI in New Zealand – the two T20s give him game time before the ODIs. For Jasprit Bumrah also, it will be about acquiring the game time. The fast bowler was rested for the limited-overs series in Australia and New Zealand. For someone like Vijay Shankar, who impressed Down Under, this series gives him a chance to enhance his reputation, especially in Hardik Pandya’s absence. For Rishabh Pant, a couple of good T20s followed by a good ODI series would all but take him to the World Cup.

From Australia’s perspective, the whole limited-overs tour here would be about regaining confidence. Only about a month-and-a-half ago, they conceded the ODI series to India in their lair. The Aussies would try to turn things around.