Liverpool and Chelsea completed a sweep of Premier League clubs into the knockout stage of the Champions League on Tuesday, a season after England had two of its representatives in the final.

The English are on the march again in the Champions League. Liverpool and Chelsea completed a sweep of Premier League clubs into the knockout stage of the Champions League on Tuesday, a season after England had two of its representatives in the final.

Liverpool, which beat Tottenham in the title match in June to become European champion for the sixth time, toughed out a 2-0 victory at Salzburg to advance as the winner of Group E and stay on course in its defense of the trophy. It’s shaping up to be a huge second half of the season for the Reds, who are also eight points clear in the Premier League in their pursuit of a first English championship in 30 years.

Chelsea was one of the teams to qualify from Group H after a 2-1 home victory over Lille under Frank Lampard, a Champions League winner with the London team in 2012 and in his first season as its manager.

Manchester City and Tottenham, the other English clubs competing in the Champions League, advanced last month with a game to spare. It is the third straight season where England has provided four of the 16 representatives in the knockout stage, as teams in the lucrative Premier League start to show the benefit of having the biggest broadcasting revenues in soccer and some of the world’s most highly rated coaches.

Napoli was one of four other teams to advance on Tuesday _ but it wasn’t enough to keep Carlo Ancelotti in a job. He was fired by the Italian team a few hours after its 4-0 win over Genk which sealed second place in the group containing Liverpool. 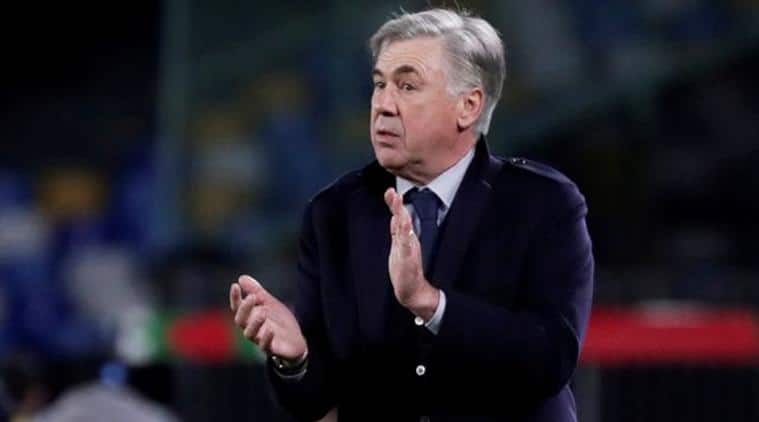 Carlo Ancelotti was fired by Napoli a few hours after its 4-0 win over Genk, which sealed second place in the group containing Liverpool. (REUTERS)

Arkadiusz Milik did his best to save Ancelotti, scoring a first-half hat trick for Napoli before Dries Mertens added the fourth against a Genk team which fielded Maarten Vandevoordt _ the youngest goalkeeper ever in the competition at 17 years, nine months and 10 days.

That secured the team second place behind Liverpool, which denied Napoli a place in the last 16 in the final group game of last season’s competition. But it wasn’t enough for Ancelotti, who had previously failed to lead Napoli to victory in any of its last nine games in his second season as its coach.

Like Napoli, Liverpool knew a win would see them progress but found things much tougher against Salzburg. Jurgen Klopp’s team survived some early scares before scoring two goals in as many minutes from the 57th, through Naby Keita _ who played for Salzburg from 2014-16 _ and Mohamed Salah.

Salah’s goal was exquisite, the Egypt forward breaking the offside trap to round the goalkeeper and score from an acute on the right with his weaker right foot.

Off to watch Salah’s goal on repeat for the rest of the night…pic.twitter.com/s524ps1gLq

Ajax came within a last-gasp Tottenham goal of reaching the final last season. It won’t even be playing in the knockout stage this time around. The Dutch club lost 1-0 at home to Valencia to drop from first place to third in Group H and fall into the Europa League.

Rodrigo scored the 24th-minute winner for Valencia, which is through to the last 16 for the first time since 2012-13.

Tammy Abraham, with a deft backheeled flick, and Cesar Azpilicueta scored Chelsea’s first-half goals against already-eliminated Lille, which pulled one back late on through Loic Remy _ a former Chelsea player.

For the second straight season, Inter Milan was eliminated after failing to pick up a home win in the final round of the group stage.

A year after only drawing 1-1 to PSV Eindhoven to exit the competition, Inter lost 2-1 to an already-qualified Barcelona _ which was without Lionel Messi and a number of other rested players. Ansu Fati scored Barca’s winner and became, at 17, the youngest scorer in Champions League history.

Borussia Dortmund capitalized, eking out a 2-1 win over Slavia Prague to qualify ahead of Inter. Jadon Sancho scored one goal and set up another for Borussia Dortmund, which had Julian Weigl sent off in the 77th and was thankful to goalkeeper Roman Burki for a string of saves.

Lyon came from two goals down at home to Leipzig to draw 2-2 and win a three-way fight with Zenit St. Petersburg and Benfica to advance from Group G Memphis Depay’s equalizer saw Lyon climb above Zenit, which lost 3-0 at Benfica and slipped to the fourth _ not even getting a consolation prize of a Europa League berth.