Five balls changed Lucknow Super Giants’s innings before their bowlers ripped through the top-half of Kolkata Knight Riders to canter to top of the group table.

Until the Hulk aka Marcus Stoinis decided to plunder Shivam Mavi in the 19th over, Lucknow’s innings was in threat of falling for a par total on a sluggish pitch. They were 142 for 4 in the 18th over but it took just five balls to change it.

On a pitch that was holding up, where previous evidence from Andre Russell, who wasn’t given his full quota of four overs despite a good spell, was clear that you can mix up the pace but have to hit the pitch to make the ball hold, Mavi strangely chose to float his balls fuller. Bad mistake. Stonis likes to shuffle to the off, and tee off the on side and he walloped three sixes and though he got out, Jason Holder smashed two more as 30 runs came that over. They would end up with 176 and KKR would fall way short.

With Stoinis, it’s the big shoulders, the broad chest, the chiselled jawline that we first see. Stoinis looks imposing just before he gets into stance. But then he almost shrivels up as if he doesn’t want to show off his physique. He sort of doubles up, curls up in his stance and squeezes into as tiny a space as his big body would allow. One can sense why he does it; as everything that happens after the bowler releases the ball is a recoiling reaction from him, a release of pent-up energy. Stoinis springs out and explodes as if that stance allows him to conserve all his energy which he then dissipates in an explosive recoil. With Mavi, he didn’t have to conjure up hits; all he had to do was to wait for Mavi to float it full, and boy did he smash them.

It’s known to everyone now how Iyer gets into awkward positions against the short pacy ones and to no one’s surprise Dushmantha Chameera hurled a snorter at his face. Iyer swatted at it so weakly that it just about popped up for a dolly of a catch to square-leg fielder. The broadcasters soon played a series of videos titled ‘Bouncers at the body’, where Iyer was seen getting into all sorts of tangles. Awkward shuffles, nervy sways, iffy positions; the bouncer is an age-old problem for him, and has come to haunt him repeatedly in this season as every team now goes short at him. He needs help and needs to course-correct, else things can get away quickly from him at this stage.

Russell does a Russell

After keeping out a torrid over from the impressive left-arm seamer Mohsin Khan, who had already bowled a maiden-wicket first over when he removed Baba Indrajeeth in the last ball, Russell broke free against Jason Holder. Pulls, fiery cuts, slogs flowed as suddenly runs burst through. He also freed his arms against the googly bowler Ravi Bishnoi. 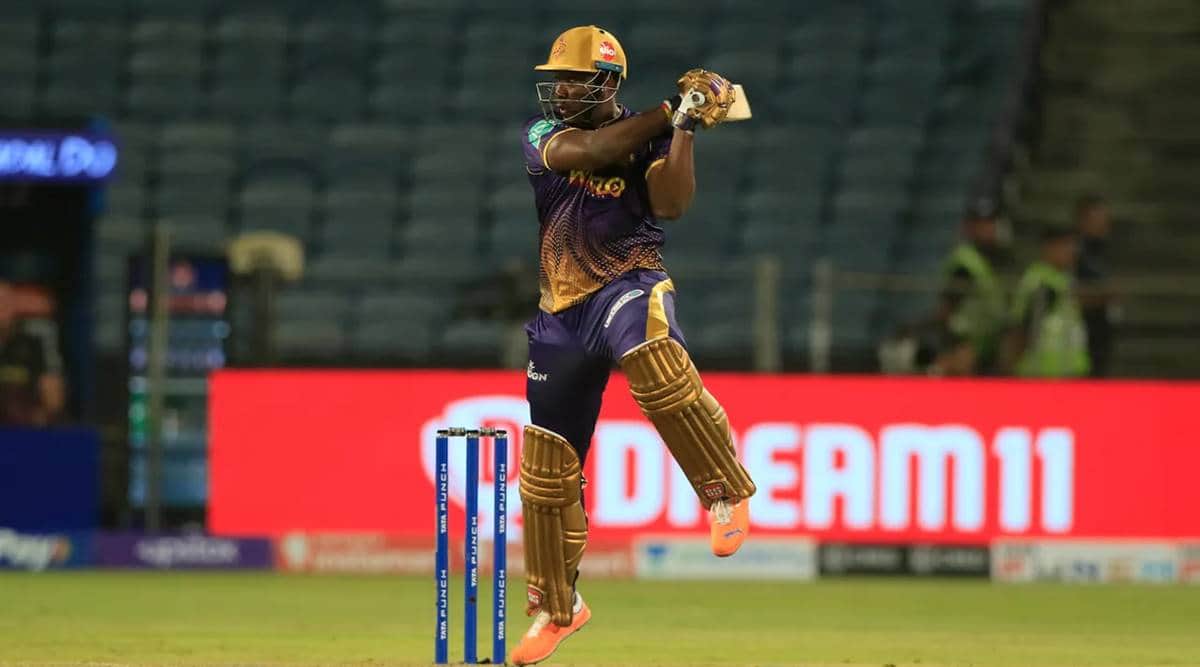 Andre Russell was on song for KKR vs LSG. (Source: iplt20.com)

On air, Piyush Chawla shared an interesting story that said much about the prowess of Russell. “In the nets, I never bowl straight at him,” Chawla would say as he was worried about the murderous swing that can launch the ball straight back at him. “So, I would either bowl it well outside off or very full outside his leg.”

Today, it seemed Lucknow’s bowlers went with the same philosophy, offering him width and length, and he kept crashing them. Until Avesh Khan managed to produce a decent bouncer that Russell top edged to third man where Holder took a good low lunging catch running forward. Russell had taken the score from 24 for 5 to 85 for 6 but with his exit, the writing was on the wall.