At the Gujarat nets, before the match against Kerala, Jasprit Bumrah was running full steam. Priyank Panchal was facing him and he was happy to see that his team-mate didn’t lose anything after recovering from a lower-back stress fracture. Bumrah, though he was supposed to play, pulled out after the board felt he needed more time ahead of the T20 international series against Sri Lanka, commencing Sunday.

“He (Bumrah) was amazing. He was bowling with proper rhythm, the rhythm he wanted. He looked in good shape. There was no loss of pace and he trained quite hard. It was pretty normal, the way he was. He was giving 100 percent,” Panchal told The Indian Express.

Panchal and Bumrah are friends on and off the field. Panchal is senior to Bumrah, having made his first-class debut in 2008. Bumrah burst through in 2013. But the fast bowler took the elevator, was fast-tracked to international cricket and became arguably India’s most valuable player.

The doughty opener, on the other hand, took the stairs, to paraphrase Vinod Kambli, despite his consistency in domestic cricket, he is yet to play for the national team. In 2016-17, he was the highest run-getter in the Ranji Trophy – 1,310 runs, besides enabling Gujarat win their first title. In 2017-18, he finished with 542 runs from seven matches and in the last season, Panchal had 898 runs from nine games. Panchal was picked for India A and showed consistency with three centuries in four series. But even after Murali Vijay’s exit and Shikhar Dhawan and KL Rahul’s loss of form, he wasn’t considered for the Indian team.

At 29, he is slowly running out. Frustration has started to creep in. “Obviously you can get frustrated. But that’s the time you have to hang on and you have to tell yourself, ‘just be patient, be calm’. These are the situations that test you and make you stronger. There’s no option apart from being patient and do things that you have been doing for so long. (At times) it becomes difficult to keep yourself motivated because you have been scoring runs for the last four-five years and someone else is getting the place (opportunity); sometimes it gets frustrating. Then again, that’s the beauty of the competition, which we are part of. I’m waiting for my opportunity, I’m hanging around there.”

The soft-spoken batsman is a cricketer with a postgraduate degree in financial management. Books have always been his friends. During his breakthrough season, he was hooked to American philosopher William James’s books. Now, as he is striving hard to reach the next level, Microsoft CEO Satya Nadella’s Hit Refresh has become an inspiration. “From Hyderabad to leading Microsoft is an inspiring story in itself. And what I can learn from his book is that if you are creative, if you have something in you, if you believe you have something in you, then you can do anything,” Panchal said.

Closer to home, Mayank Agarwal is a living proof of hard grind reaping dividends. The Karnataka batsman had to wait a little too long, a mountain of runs in domestic cricket notwithstanding, to get into the Indian team.

But when the opportunity arrived he was not only ready but also grabbed it. “What he has done is amazing. All credit to him the way he worked hard and performed,” Panchal was full of appreciation. 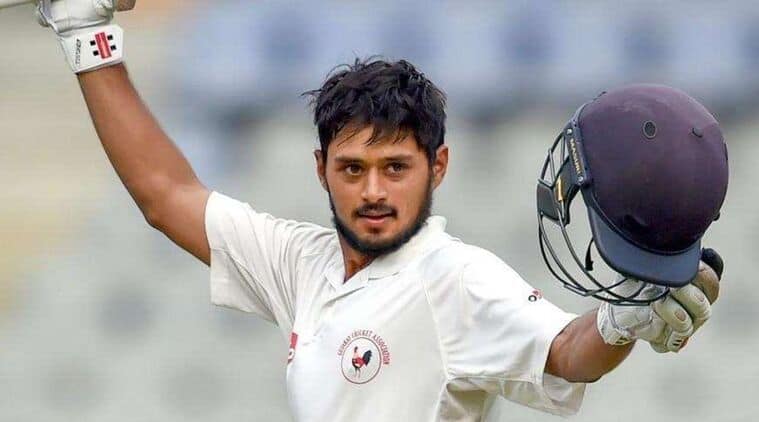 India A opener Priyank Panchal has been in a superb form. (FILE)

A piece of advice from Rahul Dravid, when he was the India A team coach, also stuck. “I had some short conversations with him, when we were playing against Sri Lanka and I was the captain. He told me to hang in there. ‘Be patient, don’t think about anything that’s not in your control,’ he told me. My ultimate goal is to play for the country and I have been performing consistently, both in the Ranji Trophy and for India A. I have scored a double hundred against England. Recently I scored a hundred against South Africa. From that perspective, I would be very happy if the opportunity comes.”

The Ranji Trophy has started late this year, in full winter, when there’s nip in the air and movement off the deck. It has become more challenging for the batsmen. Panchal has embraced the challenge. “I think it’s good. These are the challenges batsmen need to face. The Ranji Trophy in December-January; if you score runs here, then you can score runs against any team in any condition.”

Up next is India A team’s tour to New Zealand. With Agarwal, Prithvi Shaw and Shubman Gill also in the side also, it needs to be seen if Panchal gets a look in. If he is picked, it would be a great opportunity to impress the selectors and team management.