Swelling with pride, Bruce Springsteen says his children struggle with the lyrics of his hits and are uninterested in his life-long vocation. Parenting advice from rock stars isn’t taken seriously but The Boss, on Jimmy Kimmel Live! some years back, had grown-ups nodding their heads, and also giving that You’ve gets it chuckle.

“Kids don’t want to go anywhere where 50,000 people are cheering for their parents. They would want 50,000 people to boo their parents.” And this wasn’t some late-life wisdom gained from hindsight.
https://youtu.be/xSr-e__wx44
Around the mid-90s, Springsteen, within years of getting married to his one-time pal from New Jersey and later-day band buddy Patti Scialfa, moved from California, the music industry hub, to the place where they first met. It was a journey back home for the sake of their children. The man with millions of adoring fans worldwide thought he, because of his area of work, wasn’t the right role model for the kids. The couple wanted their children to be away from the make-believe showbiz world. Like them, they wanted their children to breathe the homely New Jersey air.

“I am in a job that retards your growth by nature. My job is so weird, it is not a real model for how you will go about and live your life,” he would tell Kimmel. “We had an 80-member Italian-Irish family. That was the way I grew up. I wanted my kids to have that sense of a bigger world than the entertainment world. I wanted them to see the people who did a lot of other things, to be around people who would shape them. And they would have a lot of options. They had a lot of relatives to look up to, like uncles and cousins. It was a good growing-up experience for me and it was good for them.” 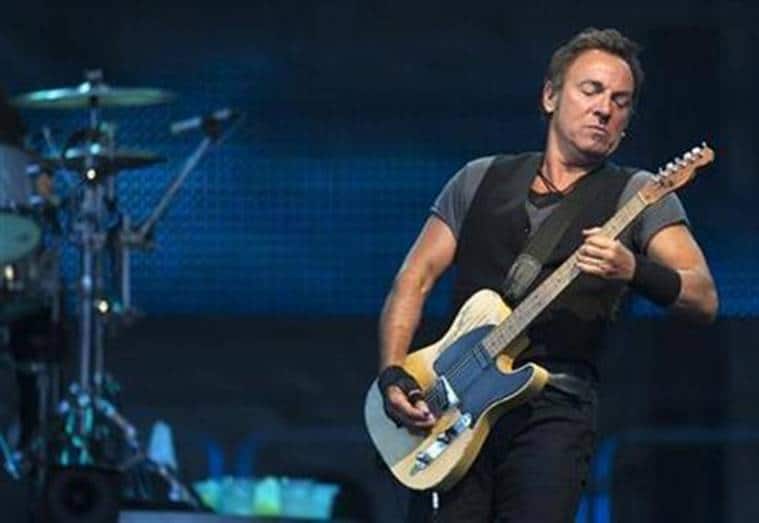 Bruce Springsteen’s daughter Jessica makes her Olympic debut. Mission accomplished Close to 25 years after the rock-and-roll deity took the big U-turn in life, things have gone as planned for the Springsteens. Their three grown-up children aren’t chasing the dream of being on stage with a guitar sending thousands into a frenzy. Nor are they hanging in hope on the margins as reality TV stars or social-media influencers with their famous name. They took the other options. They ended up looking up to uncles and cousins. Springsteen’s eldest son Evan works as a radio programme director. The youngest, Sam, got drafted as a New Jersey fire-fighter – his initiation a few years back attracted morning television reporters eager for bytes from the proud parents in the audience. As for daughter Jessica, 29, she’s the reason The Boss finds a mention on the sports pages during this Olympic fortnight. Finishing as the best among American riders, the baby of Team USA missed qualification. She now has the team event to look forward to. For some time now, Jessica has been an elite show jumper, someone with skills to guide a close to 900 kg thoroughbred over 16 obstacles spread over a 500-metre criss-cross course in close to a minute. Timing the horse’s jump is the key and a refusal by the animal to go over the fence is an embarrassment and a penalty. https://twitter.com/FEI_Global/status/1422538545495949315?ref_src=twsrc%5Etfw%7Ctwcamp%5Etweetembed%7Ctwterm%5E1422538545495949315%7Ctwgr%5E%7Ctwcon%5Es1_&ref_url=https%3A%2F%2Findianexpress.com%2Farticle%2Folympics%2Fthe-boss-daughter-bruce-springsteens-jessica-olympian-7436808%2F Jessica has been a long-time pro on the highly-lucrative show jumping circuit. Just the other day, she won a $37,000 pay-cheque. It’s a sport that attracts luxury brands and exotic destinations. While it started as a pastime for bored royalty, show jumping has now caught the fancy of second-generation billionaires. Jennifer Gates and Eve Jobs – the second names are giveaways – are said to be fierce rivals and ranch-neighbours in Florida. Starting early But Jessica’s story is different. She didn’t jump on a horse at some fancy school or a finishing academy. Her first brush with horses was natural, she grew up at a New Jersey farm. There were animals all round and a big barn where Springsteen some years back shot his 2019 movie Western Stars. Mother Patti’s love for horses got passed on to the daughter. Showjumper Jessica Springsteen of the United States’ Olympic equestrian team.
In his book Born to Run, Springsteen writes about his little girl-turned-horsewoman in the chapter ‘Pony Girl’. In an indulgent tone, he talks about his stubborn daughter with a temper. She would turn “Bazooka-bubblegum pink” if someone tried to unbuckle her from the high chair. Little Jessica had an obsessive “Do It Herself” streak in her. This other time, the parents take their four-year-old to a farm where a horse was grazing. Jessica instinctively walked towards the animal, stared for a while and closed her eyes in meditation. She would utter what sounded like a wish or a prayer – “Can I get on?”

These days the 5’6” rider with movie-star looks often finds her parents among the spectators at venues around the world. There have been times when the still-touring rock couple happen to be in cities where Jessica’s show jumping travelling circus has made its base. A daughter close to 30 going for her 60-plus parents’ rock concert with friends is an endearing storyline.

Jessica Springsteen – daughter of 'The Boss' Bruce @springsteen – will make her Olympic debut in the equestrian individual jumping event today.

Springsteen mentions in the book that his daughter is often at competition venues where he has ‘unloaded tons of rock ‘n’ roll gear on many a victorious night’. Not quite the fainting groupies or fans yelling hoarse like her father, Jessica does get polite regimented applause after bossing the show. Despite all attempts by her parents, Jessica, in a way, did end up following her father. But to the delight of Springsteen, she is on a horse while taking a different route.

The father mentions in the book that he knew their daughter was serious about sport quite early. On the way back from her first equestrian event, which she lost, Jessica was unusually silent. The parents were doing their best to hand-hold their little one dealing with her first failure. But there was no response. Springsteen paints a vivid picture of the uncomfortable car ride home and the day he saw his daughter’s steel. “Then, from the musical quiet in the backseat come two questions: “What was the name of the girl who won” and “What did she do to win”.

At Tokyo, it was a boy – Britain’s Maher Ben – who was the best at this mixed event. And cleared all hurdles in the quickest of time.

Virat Kohli to return home after first Test in Australia