Shared News| December 28, 2019 11:46:57 am
After consulting with close fielders and Travis Head who took the catch at leg gully, Australia captain Tim Paine lost a review after challenging umpire Marais Erasmus’ decision of giving Mitchell Santner not out.

Mitchell Santner had an almighty escape after a caught-out review proved “inconclusive” for the third umpire to overturn the onfield umpire’s not out decision on the third day of the Boxing Day Test between Australia and New Zealand in Melbourne.

Australia’s frustrations with Decision Review System continued after a Mitchell Starc delivery after being fended away by Santner at the crease to Travis Head at leg gully wasn’t given as a dismissal. The home side appealed for it and believed that it had the glove of the Kiwi batsmen before hitting his arm guard.

He lost a referral when third umpire Aleem Dar upheld the decision after reviewing video replays from several angles and said there was “inconclusive evidence” although the ball appeared to brush the sweatband of Santner’s glove.

“I suppose you have to go with the on-field umpire’s decision but there’s a bit of speculation on it.”

“That has been missed by the third umpire, absolutely as plain as day,” Ricky Ponting said on commentary for Channel Seven.

“If you can’t get that right, then you shouldn’t be doing it. (The sweatband) clearly moves before it goes into the forearm guard. That in my opinion is conclusive evidence.” 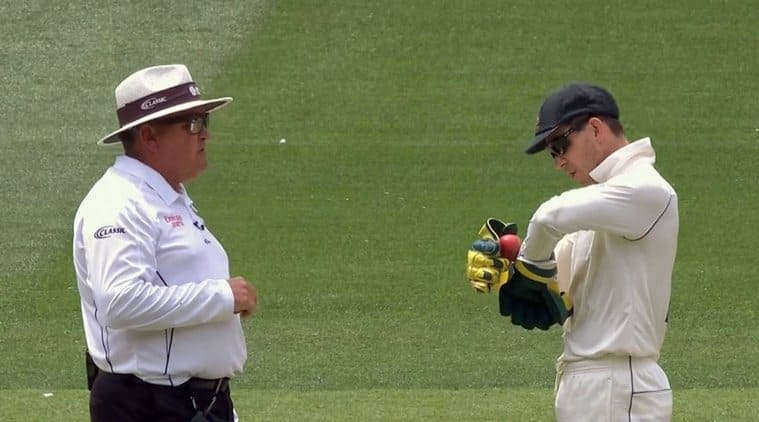 Santner was ultimately caught behind for three off the bowling of Pattinson soon after the lunch break before New Zealand were bowled out for 148 before tea in reply to Australia’s first innings 467.

Paine complained about the DRS on day two after being dismissed lbw on review for 79.

Australia were also flummoxed when New Zealand batsman Ross Taylor was given out lbw on field but successfully referred the decision late on day two.

“I’m just seeing time and time again, what I see to the naked eye, or watching it on television in real time, and then when it comes up it is sometimes a little bit off the mark,” Paine said of the DRS in an interview with state radio station ABC.

Edinson Cavani unavailable for Manchester United due to COVID-19 rules

Bangladesh call up Tushar for series against Sri Lanka A