Shared News: October 14, 2020 10:44:46 am
Brazil and Argentina top the group after winning both of their opening matches in the 2022 World Cup qualifiers, while Paraguay, who drew with Peru in their opener, are third on four points.

A Neymar hat-trick helped Brazil to a 4-2 win over Peru on Tuesday and a share of the lead with Argentina in South American World Cup qualifying.

Neymar scored twice from the spot and once in added time to lead Brazil, which twice rallied from behind.

Lionel Messi’s Argentina lineup topped Bolivia 2-1, scoring its first win in the altitude of La Paz since 2005, to also make it two victories from two starts in the round-robin group stage.

Brazil leads the standings with a superior goal difference after thrashing Bolivia 5-0 in Sao Paulo last week in its opening game.

Also on Tuesday, Colombia was held to 2-2 draw at Chile, Uruguay lost 4-2 at Ecuador and Paraguay beat Venezuela 1-0 away with a goal by Gastón Gimenez in the 85th minute.

Peru started the match imposing its aggressive style and reaped the benefits in the 6th minute, with a right-foot volley by André Carrillo from the edge of the box. It was his third goal in South American qualifiers, following a brace in Peru’s opening 2-2 draw at Paraguay.

Brazil recovered and continued to press, and Neymar’s looming presence in the box brought a first penalty, which the star striker calmly converted to equalize in the 28th.

Neymar is now second for Brazil in both goals and assists, only Pelé is higher in these categories. pic.twitter.com/GXXt1E3RaZ

The Brazilians kept pressuring and wasting chances after the break. But a Renato Tapia shot deflected by substitute defender Rodrigo Caio put Peru ahead in the 59th.

Only five minutes later Richarlison made it 2-2, following a close range header by Roberto Firmino.

Brazil’s pressure brought a second penalty to put Neymar back on the spot and he converted to register his 63th goal for the national team, overtaking two-time World Cup winner Ronaldo. Only legendary Pelé is ahead, with 77 goals.

Neymar scored again in added time, shortly after Peruvian defender Carlos Zambrano was sent off, when he swooped on a rebound after Everton Ribeiro’s shot hit the post. 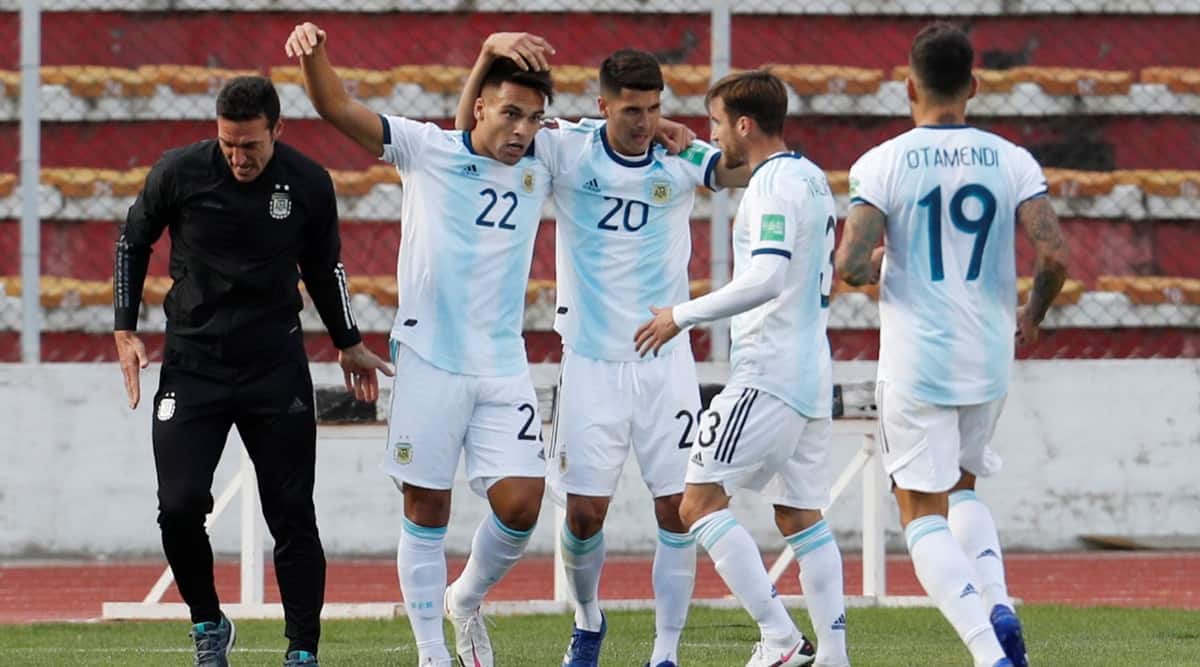 La Paz has old traumas for Argentina in World Cup qualifiers. The biggest was in 2009, when Bolivia had an astonishing 6-1 win over Messi’s team. The superstar also failed to impress in 2017, losing 2-0 in the Bolivian capital.

History seemed set to repeat after Marcelo Martins opened the scoring for the hosts with an easy header in the 24th minute, raising the specter of another bad day for the Argentina team 3,600 meters (11,800 feet) above sea level in the Bolivian capital.

But in first-half stoppage time, Bolivia defender José Carrasco failed to clear close to the line and the ball hit the right leg of Argentina striker Lautaro Martinez and went into the net.

The goal made Martinez the first Argentina player other than Messi to score in a World Cup qualifier since a 3-0 home win against Colombia in 2016. Seven matches took place in between.

Lautaro Martinez is the first Argentina player besides Lionel Messi to score in a World Cup qualifier since November 2016.

Just when the draw seemed to be good enough for Argentina, whose players were clearly taking their time to catch their breath, Bolivia made another costly defensive mistake in the 79th.

Messi found Martinez on the edge of the box. The striker calmly assisted unmarked Joaquin Correa, who beat goalkeeper Carlos Lampe with a left-foot shot.

“It was a great win in the altitude, where it costs more,” Messi said in his social media channels. “There’s still a lot to go, the qualifiers have just started, and we are very happy for these two wins.”

Bolivia’s national team is mired in a political fight between clubs and the sport’s national governing body. Many of its main players are sitting out World Cup qualifiers.