A look at an intriguing rivalry between two under-achieving teams New Zealand and South Africa.

Hero of 2015: Grant Elliott wasn’t even in the scheme of things for the 2015 World Cup until the all-rounder’s sensational T20 form prompted captain Brendon McCullum’s gamble. (Reuters)

Two semifinals ended in heart-break in the 1992 edition, where South Africa debuted at the World Cup after returning to international cricket post their apartheid ban, and lost on the inglorious rain rule. Elsewhere, Martin Crowe was about to be swept in lucklessness and the furius flood called Inzamam, when after scoring 91 and pulling his hamstring, his dream vamoozed. For those who throw the word ‘choke’ around, this was what a real tragic one felt like in Crowe’s words: “I sat on the edge of my chair, leg braced and bound, and I wept. The dressing room scene was indescribable. Then we had to tour the ground and acknowledge the support of a nation whose hearts we had won. It was a choking, breathtaking experience. It was unforgettable and it was devastating. It was cricket in the broadest canvas”. Crowe had apparently been asked to resign as captain and play as a batsman purely – an offer he’d refused having planned for the Cup for 18 months. 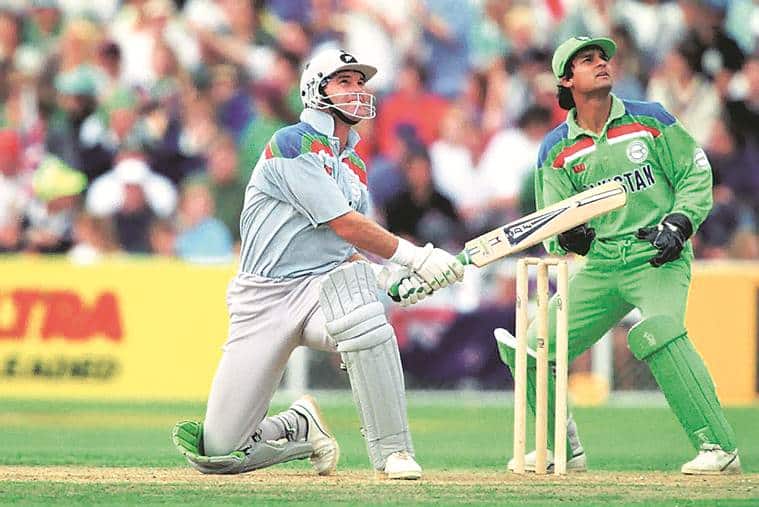 Flashback: Two semifinals ended in heart-break in the 1992 edition.

Auckland was also where NZ had earlier met South Africa, completing a 7-wicket win, their first of five in World Cups where they are the Proteas’ bogey team (NZ lead 5-2 in head-to-head). Peter Kirsten, a Saffer still playing for South Africa at 37, had top-scored with 90, was sent back by Wibbly Watson (of Wibbly Wobby fame), but his big innings was clinically shaved off by Black (then Grey) Caps openers, Latham and Greatbatch. Guardian’s Vic Marks recalls sitting next to noted anti-apartheid activist and journalist Donald Woods on that match who initiated the conversation: “See that spot there?” – a patch of grass at Eden Park about 40 metres from where the rugby posts stood in winter. “That’s where that bloody Welsh referee gave the penalty to the All Blacks against the Springboks – the last kick of the match.” Marks writes: “It was a controversial decision at the end of a very controversial tour in 1981, given 11 minutes into extra time by Clive Norling. The kick went over and thus the All Blacks won. So I learnt that it was possible to work courageously against apartheid and to be the most ardent supporter of South African teams at the same time.”

For a team considered perennial favourites at every edition save this one, South Africa seem to falter far too often against unlikely arch nemesis New Zealand. While 2003 saw the familiar rains undo their 300-plus target, both 2007 and 2011 (quarterfinals at Dhaka) were dull batting implosions, like the thudding of a cotton sack to the floor – capitulations minus a whimper.

The last time the Proteas got past the Black Caps in World Cups was a whole 20 years ago — at Birmingham, Wednesday’s venue, back in the 1999 edition. Having been dumped out in knockouts in 2011 and 2015 at the hands of the Kiwis – middle-order batting collapses the hallmark of those exits – the 1999 Super Six game too saw a mini middle wobble, though skipper Hansie Cronje was around to steer his team in a strong batting lineup of Gibbs, Kirsten and Kallis, despite a rare Klusener miss. The 74-run win from 20 Junes ago, was the last such against a team that’s been a constant banana peel for South Africans. It coincided with the strongest era for the team – with the 1996 win for SA at Faisalabad being the start of the four years of dominance. The South African team with its 5-wicket-win in Pakistan was unrecognisable from the ones that have lost 4 times at World Cups since.

It’s when Donald didn’t fancy taking the new white ball and left it to Matthews and Pollock, Gary Kirsten was riding his 188-run-high and that confidence was coursing through his veins, evident in the two quick-fire pick-and-throw run-outs. It’s when Big Brian McMillan could cover for two slips, Cullinan, Rhodes and Cronje manned covers which leaked nothing, NZ dropped three catches within the first 8 overs and Cronje’s batting was sublime. Those years of South African dominance in cricket coincided with the Springboks enjoying an upper hand over the All Blacks in rugby – incidentally 1999 is the last time NZ lost to SA at a rugby World Cup too.

The 1996 World Cup broadcast from Faisalabad interestingly, dwelled for long on something ominous up in the sky. The commentator in a morose tone as NZ made a 170-odd, said: “And up there is the local vulture, which in Pakistan is considered extreme bad luck. That’s hovering over New Zealand batting.” Neither teams have quite had the rub of luck, never going the distance.

Ian Smith’s voice from the commentary box quivered with excitement as Elliot muscled Dale Steyn into the stands at Eden Park to catapult New Zealand into their first-ever World Cup final. It was New Zealand cricket’s equivalent of rugby’s “Stephen Donald moment.” Six months before this act, Elliott had actually joked about producing this “Stephen Donald moment, if required” – the All-Blacks star scoring the winning penalty against familiar foes South Africa to clinch the 2011 Rugby World Cup title. Elliott, much like Donald, was an accidental hero because despite being nowhere in the reckoning, he was included on captain Brendon McCullum’s behest, a masterstroke part intuition, part Elliott’s form in the domestic T20. Smitten by cricket since the 1992 World Cup —coloured clothing, flood-lights and white ball – he caught most of the matches on television skipping school and getting suspended from school, and barred from weekend cricket games.

Following the Eden Park’s high, Elliott featured in another 17 ODIs and in 2017, at 38 got a Kolpak deal to play the T20 blast league for Birmingham Bears. After two seasons, Elliot decided to hang his boots. He’d funnily retire citing he had no one around in the team to drink beer with.

Unseen by the world that never misses a chance to call their players chokers, the harshest blow the Proteas suffered at the World Cup 2015 was dealt by their administrators back home. It’s easy to blame Dale Steyn for bowling the length ball that Grant Elliot hit for six but Cricket South Africa made a more crucial false move much before the toss. South African had won their quarter-final by 9 wickets, and while in the best of spirits, till the the team dinner, a bombshell from Johannesburg, was to follow.

In his book “Caught in the Middle”, Mike Procter talks about the night of intrigue and drama. “I was later informed that Mike Hussey, who was working as the batting consultant for South Africa, said the mood had never been better at dinner before the squad was announced.

Then that was instantly deflated by the shock of the team chosen,” he writes. The in-form new ball bowler Kyle Abbot, who had 9 wickets from 4 games and never went above 5 runs, had been dropped.

The book says that there were rumours “political interference”

Africa’s history, the decision makers threw cricketing logic out of the window. Procter talks about the impact of the puzzling decision on the team. “Some say that AB de Villiers didn’t want to play, and that even Philander didn’t want to play. As ever, the biggest mess is left for the players to clean up, and it is them that you really feel sorry for.” Philander went wicketless, conceding 52 runs in 8 overs. Soon after the World Cup, Abbot packed his bags and took the Kolpak deal.

In Stead of playing

Quiz night, lounging at pubs, birthday cakes and posing for ‘candid canal shots in Peaky Blinders territory’. It’s been more than 10 days since New Zealand last played at the World Cup and the players have been coming up with creative ways to ensure boredom doesn’t creep in. The 10-day break gave New Zealand players time away from the game.

Coach Gary Stead gave all players a couple of days off to spend with their wives and kids, and recharge themselves before Wednesday’s big game against South Africa.

Martin Guptill was posing around the streets of Birmingham where British drama Peaky Blinders was shot while his and Aaron Finch’s wives spent their Saturday at a Spice Girls concert in London.

A quiz night on Monday concluded the off time as the team hit the nets on Tuesday. It’s a similar pattern they adopted at the 2015 World Cup, where the players were given a few days off after starting their campaign strongly. Stead hopes the break will keep the players fresh this time too, as the Black Caps head into a crucial phase, with three matches in 8 days.

Not edgy in Edgbaston

Proteas are in the last chance saloon, but there is no such desperation evident on the official Cricket South Africa Twitter handle. Kagiso Rabada is shown trying his hand at playing the piano, when he’s not catching 40 winks. Lungi Ngidi – who has been declared fit for the New Zealand game after recovering from a hamstring injury – is scouring the town in search of a Starbucks outlet, while Tabraiz Shamsi – who took time out to congratulate Kuldeep Yadav on the Babar Azam dismissal – is on a Lamborghini drive. If South Africa don’t get the right result on Wednesday, they will have plenty of time to indulge in these pursuits anyway.

Good but not good enough

On paper, it may appear to be a match-up between two teams notorious for bottling it on big occasions. South Africa, despite being favourites almost every time since 1992, have never gone past the semi-final stage. New Zealand have made the last-four stage on six occasions, including in 2015 when they reached the final (beating South Africa). That’s amazing consistency— though some would see it as amazing consistency at choking. However, while it can be argued, with considerable merit, that South Africa’s reputation of being bottlers is exaggerated, it’s downright unfair to use the C-word for the Black Caps. If at all, New Zealand’s record at the World Cup vis-a-vis their overall performance in ODIs shows how they constantly punch above their weight at cricket’s showpiece event. While during the course of their non-World Cup ODI history, New Zealand have lost more matches than they have won (679 games, 294 wins, 340 losses, w/l 0.864), at the World Cups, they have won just shy of twice as many as they have lost (82 games, 51 wins, 30 losses, w/l 1.700) — they are literally twice the team at the Cups. South Africa, on the other hand, are almost as good at the World Cups as at other times. A dominant team in ODIs outside of the Cups (555 matches, 343 wins, 192 losses, w/l 1.786), their record at the biggest stage is 60 M, 36 W, 21 L, 1.714 w/l. Only a marginal dip in their performance, but ultimately the difference between the cup and lip.