Air India’s Chairman and Managing Director Ashwani Lohani said: “In tune with Air India’s role and responsibilities as the national carrier, we would be happy to alleviate this inconvenience by considering the possibility of operating a few B777 aircraft, on their established routes.”

On the day Jet Airways announced a temporary suspension of its operations, state-owned Air India told State Bank of India that it was exploring the possibility of leasing five of its wide-bodied Boeing 777 aircraft that have been grounded and operate them to destinations such as London, Dubai and Singapore.

In addition, Air India has almost completed hiring 150 cabin crew members from Jet Airways for its international operations on Boeing 777 and Boeing 787 aircraft. It also offered special fares to passengers with confirmed return tickets for travel till April 28 on Jet Airways’ flights on 19 international routes.

Jet Airways is presently under the management control of the SBI-led consortium of lenders, which has offered to offload between 32.1 per cent and 75 per cent stake to an eligible investor after evaluating all bids. So far, the lenders have received expression of interest (EoI) from four-five parties. Qualified parties would be asked to submit binding bids, and the process is expected to conclude by May 10.

The bankers had rejected Jet’s request for immediate fund infusion of Rs 983 crore to stay afloat. Following this, the airline temporarily halted its operations Wednesday night till such a time fresh money is injected into the company. Jet Airways had more than 16,000 employees on its rolls.

In a letter written to SBI Chairman Rajnish Kumar Wednesday, Air India’s Chairman and Managing Director Ashwani Lohani noted: “We, at Air India, are indeed saddened by the turn of affairs at Jet Airways, a scenario that is causing considerable inconvenience to the travelling public. In tune with Air India’s role and responsibilities as the national carrier, we would be happy to alleviate this inconvenience by considering the possibility of operating a few B777 aircraft, on their established routes that…stand suspended at present.” 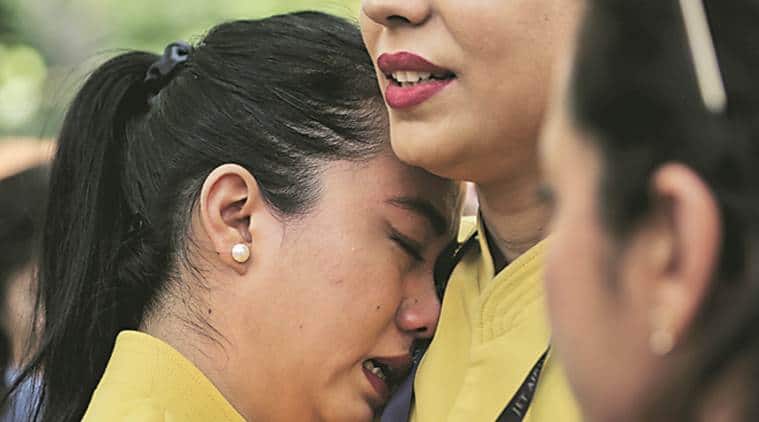 Jet Airways has announced a temporary suspension of its operations. (Express photo/Tashi Tobgyal)

Jet Airways, grounded since Wednesday night, owns 10 wide-bodied Boeing 777-300 ER planes, along with a few Airbus A330s, which it used to operate on medium and long-haul routes connecting New Delhi and Mumbai with international destinations such as London, Amsterdam and Paris. Lohani wrote the move was subject to approvals and financial viability, and Air India can examine the possibility of taking five B777s on wet/dry lease basis from SBI on mutually agreed terms.

Apart from Air India, which is now the only Indian airline to operate on long-haul international routes, budget carrier SpiceJet is also inducting the Jet Airways-operated Boeing 737 planes, which were repossessed by lessors due to non-payment of dues. 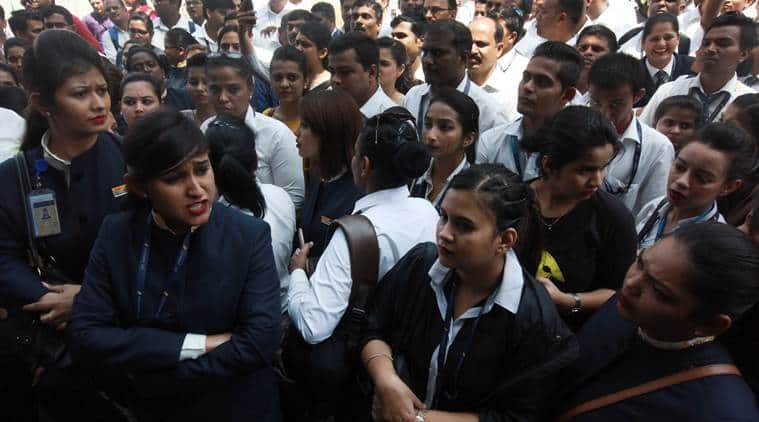 A spokesperson for Air India said the flag-carrier had advertised for hiring of 400 cabin crew members, of which 150 are picked up from Jet Airways. Jet has around 4,000 cabin attendants on its payroll. “The interview and selection process has been completed and only medical checks are pending before the crew from Jet is inducted. The crew members will be hired on a contract valid for five years,” the spokesperson said, adding that about 50 cabin attendants were also being hired from TATA-Singapore Airlines joint-venture carrier Vistara.

According to an Air India official, who spoke on condition of anonymity, senior pilots and maintenance personnel of Jet Airways have also approached the national airline seeking employment. However, Air India has not readied a plan yet to hire pilots and maintenance personnel, the official said. A bulk of Jet Airways’ out-of-work pilots have also joined IndiGo and SpiceJet. “It is essential for us to keep flying. If there are no flying hours in our log book for a long time, it affects our career prospects,” a senior pilot flying for Jet, who is in process of joining a rival airline, said.