In Asia, Sreeshankar is ranked at No. 6.
The Kalathil family, spread across the Yakkara bridge on the banks of the Kannadi river that splits the Palakkad Municipality, is famous for having produced many sportsmen and medical professionals over the years.

The family, where sports runs deep, has at least one member connected to it in one way or another. The eldest of the 11 brothers – S Haridas – represented Calicut University while others have followed in his footsteps. Now, M Sreeshankar, a fourth-generation sportsman from the family and the son of the youngest of the 11 siblings including two sisters, is making waves in athletics.

Sreeshankar, the son of international triple jumper S Murali (and K S Bijimol) is hailed as one of India’s best bets to win a medal in the Tokyo Olympics. Both Murali and Bijimol were medal winners in international meets. Murali had won a silver medal in men’s triple jump during the 1989 Islamabad South Asian Games, while Bijimol won a silver medal in the girls 800m event and gold in 4x400m relay in the 1992 Asian junior meet. So it was natural that Sreeshankar, who was born on March 27, 1999, saw Olympic logos and sports motifs around him was attracted to sports.

The 22-year-old final-year BSc (Mathematics) student of Government Victoria College is the national record holder in long jump and currently the top sixth jumper in Asia. The young lad, along with javelin thrower Neeraj Chopra and the Indian relay teams, will be carrying the hopes of the nation in Tokyo. Unlike his peers who train under foreign coaches and compete in foreign meets, Sreeshankar is thoroughly homegrown and trains at the recently built synthetic track stadium of Government Medical College, Palakkad which is hardly two kilometres from their home. The stadium might be just two years old, but has no dressing rooms or even washrooms. So Sreeshankar set up a makeshift gym and a dressing room using aluminium sheets.

Come July 31 this boy will be competing for India in the men’s long jump event in the deferred Tokyo Olympics. Indians across the globe will be both rooting for the boy who left medicine and engineering courses before taking athletics as a pro career. At the 2018 Jakarta Asian Games, Sreeshankar, fondly called Shanku, finished sixth and swore that ‘I will be back’. Later that year, he leaped 8.20m in Bhubaneshwar and broke the 8-m barrier and overcame his mental block.

However, there was more hurdles along the way as he was also diagnosed with appendicitis and took time to recover. 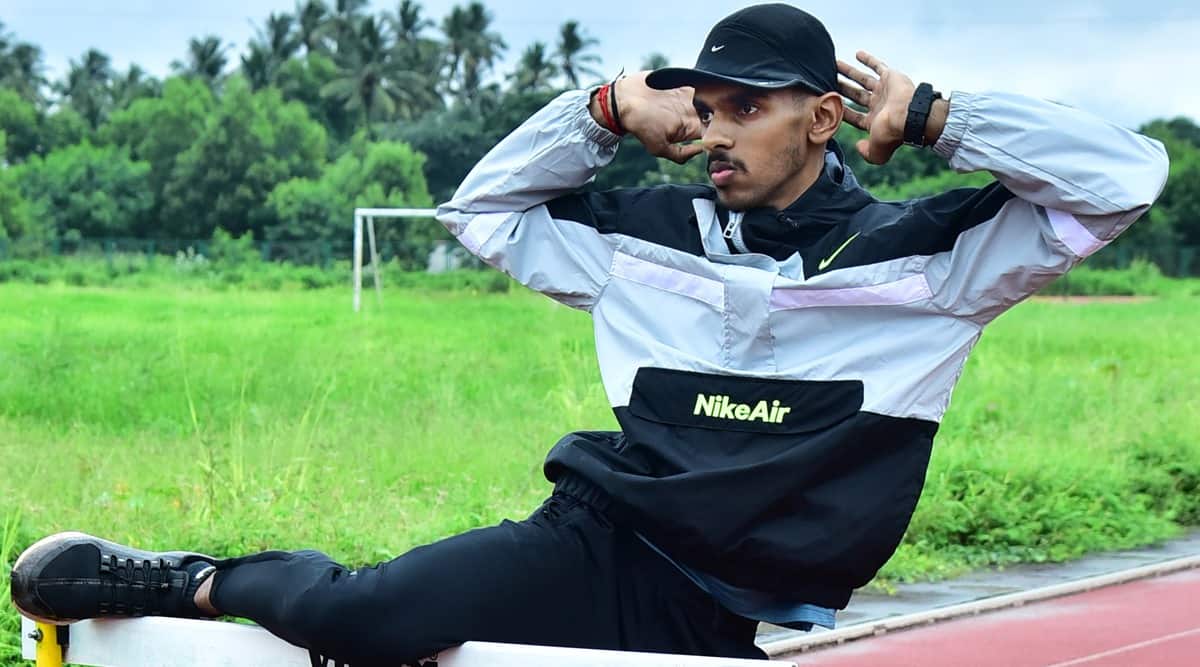 Long jumper Sreeshankar ‘s PB is 8.26m.
Sreeshankar was under pressure to shift his base from Palakkad to Patiala and train with national campers with the Athletics Federation of India’s High-Performance Director Volker Herrmann. That was when Covid-19 struck, forcing him to find solace in books, music, and watching NBA matches.

Back home, ‘Shanku’ should have been a household name and at par with Olympian Suresh Babu or TC Yohannan who were the first to break into 8m clubs. But he is yet to become the star despite doing well on and off the field.

In an interview with indianexpress.com, Sreeshankar maintained that fame and stardom do not bother him at all.

“Past is past and whatever happens will happen,” Sreeshankar turned philosophical for a moment.

Covid-19 induced lockdown took its toll as there were no trainings and meets. But then the Olympic Games itself was deferred.

So the Kalathil family huddled together and decided to buy a 5-cent vacant plot area in the lane where they stayed and set up a gym worth Rs 7 lakh. 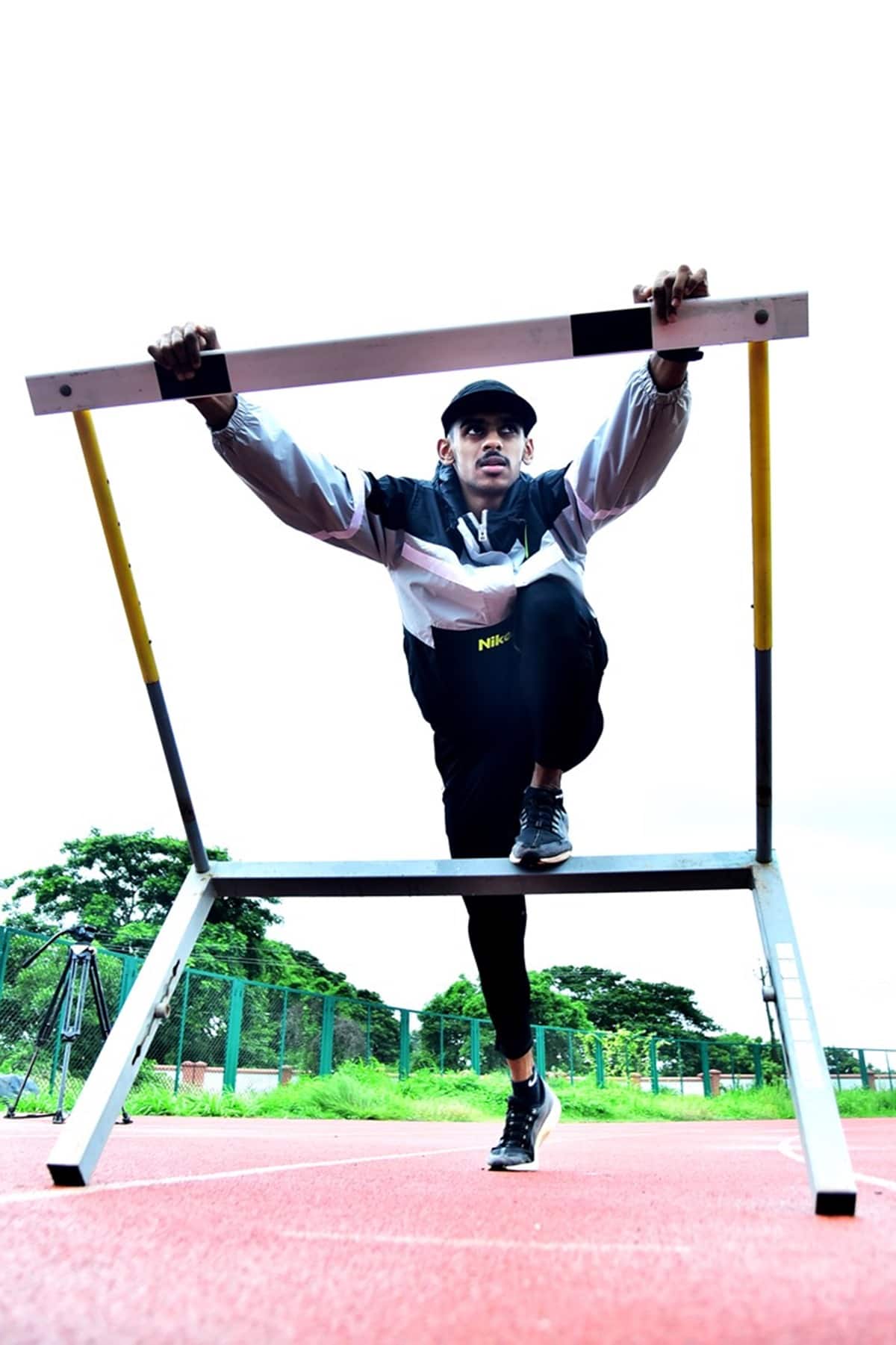 “Everyone chipped in. My brother brought the plot. Even Shanku contributed his scholarships amount, his cousins who were working donated generously. We are expecting more gym machines to arrive soon thanks to the state government,” Murali said while showing the modest gymnasium with machines used for squat exercises using weights.

On March 21 this year, he secured a berth at the Olympic Games with a jaw-dropping performance of 8.26m in Patiala.

“I never had any doubts about myself. It was only a matter of time. If everything falls in place, then I’ll make it,” he said assuring one and all. Not only did he qualify for the Olympics but also achieved a personal best of 8.20m, a national record that was set in Bhubaneshwar in 2018.

In 2018, Yohannan was first to predict that Sreeshankar will climb the Olympic podium if he strengthens his lower body. His mother Bijimol, who works at the Food Corporation of India (FCI), looks after his diet and nutrition while his dad-turned-coach Murali has been in charge of his fitness for the past 10 years.

Sreeshankar is ranked 34 in the World Athletics rankings released on July 15 and is way behind favourites Juan Miguel Echevarría of Cuba (8.60m plus), Tajay Gayle of Jamaica (8.60m plus), and JuVaughn Harrison of the USA (8.40m plus).

“All I need is three to four international contests before the actual competition begins. I’m capable of doing it,” Sreeshankar signed off before boarding the flight to Patiala to compete in Indian Grand Prix-4 (on June 21, Monday) and National Inter-State Athletics Championships (from June 25 to 29).

ATP Cup: Rafa Nadal made to sweat by Yoshihito Nishioka, Novak Djokovic has it easy