Shared News: August 23, 2020 8:43:33 am
Rohan Bopanna with his coach Scott Davidoff and physio Gaurang Shukla in New York, where he will play at the ATP Masters this week. (Source: Rohan Bopanna/Instagram)

The layover in Frankfurt, from Bangalore en route New York was quite short. “About an hour,” estimates Rohan Bopanna. There wasn’t much time to spare after de-boarding and proceeding to the next gate. In queue though, he noticed a number of familiar faces, fellow tennis players lining up to board the same plane that was to take them to the US Open.

A veteran now on the tour, Bopanna is accustomed to bumping into colleagues at airports. He’s longed to see his ‘family’ on tour for five months. And now that he did, a new reality sunk in. “Dominic Thiem, Dennis Novak, Mate Pavic, Marc Polmans, Alexander Bublik, Radu Albot…” he starts listing. “Everybody was wearing a mask, so you have to give it a closer look to see if that’s the person you think it is. It’s a guessing game. But everyone just greeted each other with an elbow tap. It was good to see them.”

The last time Bopanna boarded a plane was back in March, when he waited for hours at Doha airport to catch a flight home. On that occasion, he wasn’t allowed to leave the airport for over 17 hours, one of the Qatar government directives against the Covid-19 pandemic.

Things have become a bit smoother since then, which is why the tennis tour could consider reopening. But the protocol has become much more stringent. Masks are now as important as a tennis racquet.

And when entering the bio-secure bubble in New York, things would be a lot different.

The USTA has decided to shift the Western and Southern Open – an ATP 1000 Masters and WTA Premier event usually held near Cincinnati – to the same venue as the US Open, and scheduled it just a week before the major. The idea is to provide a three-week window for the two events, and create a safety bubble where players are restricted to only the hotel and the venue – in some cases, players like Novak Djokovic and Serena Williams have been provided rented accommodation at predetermined locations.

But the difference in the US Open this year could be seen from as early as the drive to the hotel from the airport.

“We weren’t driving through skyscrapers like we normally would, but instead going through open space. We weren’t going to be staying in Manhattan, the hotel this time is in Long Island,” says world no. 37 Bopanna. “This is the first time I’ve been to New York but nowhere close to Manhattan. There is a shuttle every 15 minutes from the hotel and courts and back, but it’s an hour’s drive, even on a Sunday.” 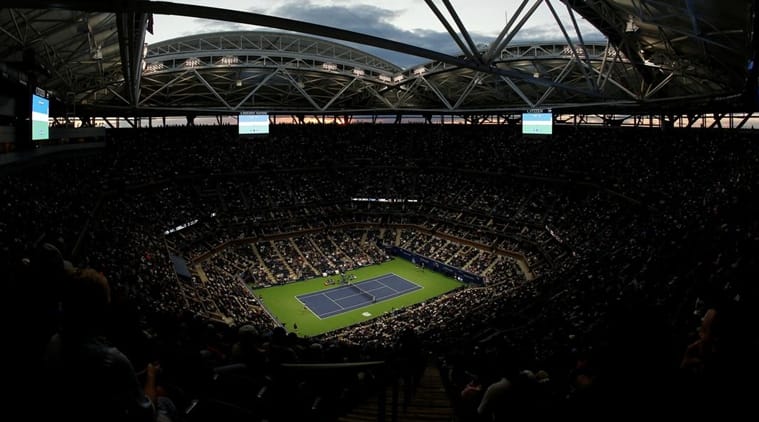 The US Open is scheduled to begin August 31 without spectators and players like Rafael Nadal, Roger Federer, Bianca Andreescu, and Ashleigh Barty. (Source: File)

Immediately after check-in, players were put through a Covid-19 test and instructed to remain in their rooms until the result of the first test came – no exceptions. Bopanna landed on a Saturday and was tested for the second time on Monday. There on, he will be tested every fourth day.

Though he tested negative, Bopanna’s not allowed to leave the hotel. “There are signboards everywhere, we aren’t even allowed in the hotel parking lot because that’s outside the bubble. Everywhere we go we have to have our mask and credentials on,” says the 40-year-old, who won the 2017 French Open mixed doubles title.

At Flushing Meadows, the venue, too, has been altered. Since the tournament will be played behind closed doors, fan parks have been converted into player lounges, and there are a number of activities set up around the grounds. “Mini golf, basketball, pool tables, arcade games… The whole place has a relaxed atmosphere now because you can walk anywhere,” he says.

The regular changing rooms too have become a bit decongested because the top 32 seeds from the men’s and women’s draws have been allotted what would have been the hospitality suite inside the Arthur Ashe Stadium. As many as 67 of the 80 suites have been provided for the seeded players, complete with a massage table.

There are certain dos and don’ts, however. “You aren’t allowed to keep anything in the locker room when you’re not there. So only if you’re getting treatment with the physios, or taking a shower, you can keep stuff there. All other times you have to take everything with you,” Bopanna says.

The rules this time reflect the simple philosophy that you’ve come here for business – tennis – and that’s all you will do.

This is a grim reminder of the current times, the new normal inside the bubble that players have to make peace with.

In the absence of crowds, Bopanna’s only support will be from his coach Scott Davidoff and physio Gaurang Shukla. At the entrance of the Arthur Ashe Stadium – the world’s largest tennis arena – is a quote by Ashe himself. “Start where you are. Use what you have. Do what you can.”