Shared News| March 12, 2020 8:35:48 am
Young Manish would spend a lot of time on 12-acre farmland his family owner, helping the family during the harvest of wheat, barley and cotton.

Two days ago, when Manish Kaushik lost to Chinrozig Baatarsukh–who he had beaten at the World Championships last year—in the quarter-final of the Asia/Oceania Olympic Qualifier in Amman, the Haryana boxer had a chat with his eldest brother Vipin Kaushik.

The brothers recollected the day they saw Vijender Singh, Akhil Kumar and Jitender Kumar receiving a warm reception at their village Devsar near Bhiwani, before the Kaushik brothers led Kumar to his home. With the 63-kg category offering six spots from Asia/Oceania qualifiers, Kaushik had one chance left in the play-off against reigning Commonwealth Games champion Harrison Garside of Australia, to whom he had lost in the 2018 Commonwealth Games final. As the 24-year-old scored a split 4:1 win over Garside to bag the ninth Olympic quota for India and became a part of the biggest ever Indian boxing contingent to ever head to the Olympics, the youngster remembered the day his Olympics journey started.

“I still remember the day Vijender bhai, Akhil bhai and Jitender bhai were brought to our village on a Gypsy and people were chanting their name. At that time, I did not know about the Olympics but I asked my brother and told him that I will also get a reception like that one day. This was going through my mind. Jaise bhi ho yeh bout jeetna tha agar Olympic medal ka sapna pura karna hai (Come what may, I had to win this bout to realise the dream of winning an Olympic medal),” Kaushik told The Media.

Young Manish would spend a lot of time on 12-acre farmland his family owner, helping the family during the harvest of wheat, barley and cotton. When Kaushik joined the Bhupender Sing’s boxing academy in Bhiwani in 2008, the brothers would cycle more than 15km every day, a journey which would sometimes offer them a chance to spot Vijender running on the village roads. The training also meant that Manish’s uncle Pawan, who also ran a vegetable shop, took the responsibility of his diet. 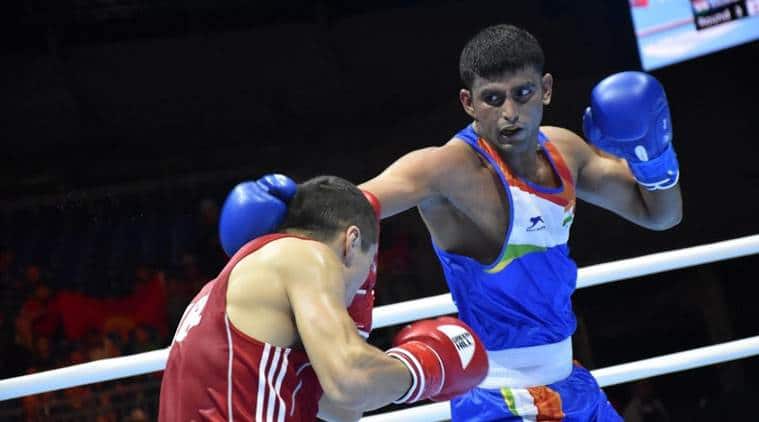 “But he was shy to disturb him. In 2009, when Manish won bronze medal in sub-junior nationals in Pune, he got a cash award of Rs 20,000 and we spent the whole amount on getting him gloves and shoes. Our uncle promised my father that he would give money for Manish’s diet and juice every day. He does it even now and Manish still takes it even thoutgh he is earning a salary (laughs),” remembers Vipin.

Kaushik reached the quarter-finals of the World Junior Championships in Kazakhstan in 2011, but it was a silver medal in the 60-kg category at the 2015 Nationals that helped Kaushik make his way into the Indian camp. He then won the silver medal at the 2016 Nationals, losing to Shiva Thapa — a fellow boxer with whom his paths would cross many times.

The following year, Kaushik avenged his loss to Thapa in the 60kg final at the senior nationals before defending his 60kg title against World Championship bronze-medallist Gaurav Bidhuri the year after. That same year, Kaushik booked his ticket to the Commonwealth Games and won a silver.

But the Bhiwani boxer once again lost to Thapa in last year’s trials for Asian Championship before avenging that loss once again, this time at the trials for the World Championships and then went on to become India’s fifth medallist at the World Championships in Russia
National coach CA Kuttappa remembers Kaushik’s early days in the national camp and the improvement and wins against Thapa, a two-time Olympian in his own right.

“When Manish came to the national camp, we had to work on his strength and also told him to try a combination of punches. He had a good straight punch but did not have any answer when the opponent counter-attacked. So we made him train extra while sparring. Against Shiva Thapa too, Manish would face problems initially as Shiva is good on counterattacks. So we told Manish to work on his long-range and to throw a combination of 3-4 punches before Shiva tried to counter,” remembers Kuttappa.

On Wednesday, Kaushik had suffered a muscle cramp in his right elbow after Garside caught him there. While Kaushik’s strength has been his left punch, the cramp caused him trouble and the coaches came out with a strategy after the opening round. “A muscle cramp hampered Manish’s movement but we told him to focus on his left punches. We told him to show the right hand to Garside and hit with the left and it worked for him. When he had shifted to 63kg last year, he had worked a lot on adding more power to his left punches and it helped him today,” said Kuttappa.

The national coach believes that Kaushik has to iron out some flaws before the Tokyo Olympics to realise the medal dreams. In the last round against Garside, Kaushik looked tired but managed to hold his edge and Kutappa believes that the youngster needs to add more to his defence. “ Sometimes, he stands still while fighting from close and medium-range and it can signal passiveness to the judges,” added Kuttappa.

On Wednesday evening, former boxer Jitender Kumar praised Kaushik and hopes he would his village’s first Olympic medal, which he had missed in 2008. “Manish has the game to win medals at the world level and he showed that in last year’s World Championships. I am waiting for him to end our village’s wait for an Olympics medal, a thing which I missed narrowly,” Kumar said.

‘Mumbai Indians is one family’: Sachin Tendulkar’s advice ahead of IPL 2020 Final