Missed Euro 2020 action so far? Here are the top five talking points as the tournament moves into Round of 16 from Saturday.

After a postponement of one year due to the Covid-19 pandemic, the 16th edition of the European Championship has not disappointed.

Italy, Belgium, Netherlands, England, Sweden and France advanced to the Round of 16 with top spots in their respective groups. Belgium and France secured their spot with relative ease, clinching their places before their third and final group match. England kept three clean sheets in the group stage, but only managed to score two goals.

Meanwhile, Wales, Denmark, Austria, Croatia, Spain and Germany managed to go ahead with second spot finishes along with reigning champions Portugal and Switzerland even though both the sides closed at the third spot. Portugal’s 2-2 draw against the world champions France was good enough to see them through.

THE COLLAPSE OF CHRISTIAN ERIKSEN 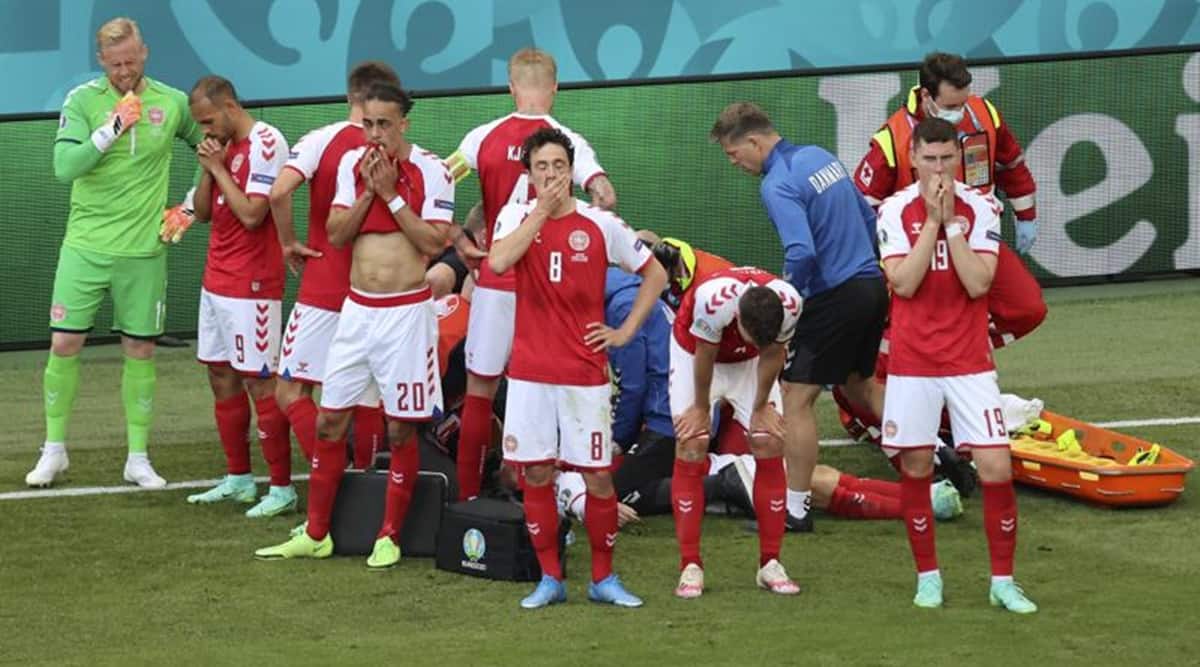 Denmark’s players react as their teammate Christian Eriksen lies unconscious. (AP) Perhaps the most nerve-wracking moment in recent football history, Denmark’s Christian Eriksen collapsed on the field in the middle of a group match against Finland due to a sudden cardiac arrest. The Inter Milan attacking midfielder fell on the ground in the 42nd minute while running near the left touchline after a Denmark throw-in. The 29-year-old’s life was saved when CPR was administered to him on the pitch and his heart was re-started with a defibrillator before he was taken to hospital. The Danish players have been widely praised for the way they handled the incident, how their timely intervention helped save Eriksen’s life and how they united to shield him from the cameras. Tributes, prayers and wishes poured in from around the world. Fellow footballers dedicated their goals to him including Inter teammates Lukaku and Hakimi and former Spurs teammate Heung-min Son. The Group B game was halted and eventually restarted an hour and 45 minutes later. Finland went on to win 1-0. The former Tottenham player has been discharged from hospital after an operation to implant a heart starter device.

The ongoing tournament has already seen a record-breaking number of own-goals. The eight own-goals are already five more than the tournament record of three set at Euro 2016. Two own-goals by Slovakia in Spain’s 5-0 victory followed Portugal’s 4-2 loss to Germany when defenders Rúben Dias and Raphaël Guerreiro gave away the lead with two own goals four minutes apart. The scorers of all eight own-goals in the group stage ended up on the losing team, including Germany defender Mats Hummels in France’s 1-0 victory. The list includes three goalkeepers who had varying degrees of luck.

A goal from over the halfway line! Czech Republic’s Patrik Schick spotted the Scotland goalkeeper off his line, launched a looping shot from just inside the halfway line and gave his team a two-goal lead it wouldn’t relinquish. Scotland lost possession when a shot was blocked and the ball fell to Schick. The Bayer Leverkusen forward looked up and spotted opposing goalkeeper David Marshall way off his line before hitting a long, curling shot that bounced into goal. Marshall gave chase, but he could only watch the ball sail into the goal before he ended up tangled in net. UEFA said it was the longest distance for a goal in the tournament at 49.7 meters. The previous record of 38.6 meters came from Germany midfielder Torsten Frings at Euro 2004.

HOW UEFA LOST ITS PRIDE 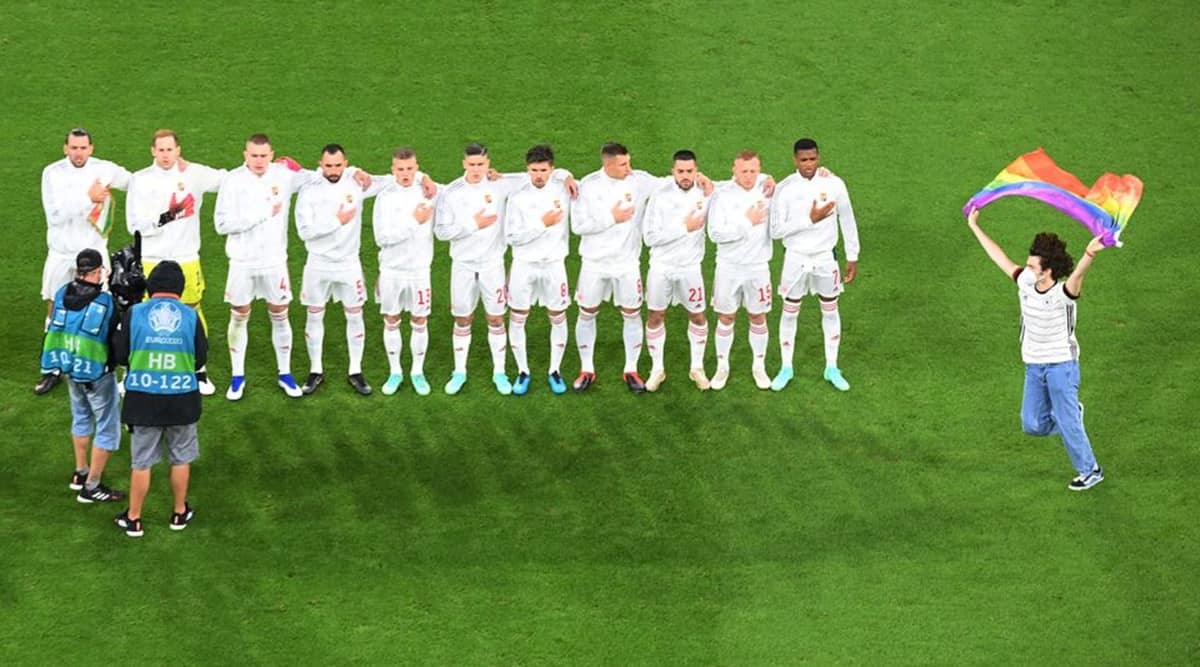 A protestor holds a rainbow flag as Hungary players line up before the match. (Reuters)
With all the respect UEFA received for standing up against the formation of potential threat European Super League, it all went downhill with the level of hypocrisy on display during the ongoing Euro 2020.

While the world celebrated June as the Pride Month to support the LGBTQ community, traces of the movement saw its appearance in the biggest football tournament taking place since the pandemic. But UEFA failed to swallow their pride.

First, UEFA launched an investigation into Germany team captain and goalkeeper Manuel Neuer for wearing a rainbow armband. After looking into the matter, UEFA concluded there was no case to answer, and allowed the 35-year-old to wear the armband as he was ‘promoting a good cause’.

However, a few days later, things took a nasty turn when UEFA rejected a request by Munich mayor to light up the Allianz Arena in rainbow colours for the Germany vs Hungary match. Mayor Dieter Reiter wanted to highlight legislation in Hungary banning school materials deemed to promote homosexuality and gender change.

UEFA claimed it had to decline the request because of its ‘political context’. “UEFA, through its statutes, is a politically and religiously neutral organisation. Given the political context of this specific request – a message aiming at a decision taken by the Hungarian national parliament – UEFA must decline this request,” UEFA said in a statement.

There was widespread criticism of its decision in Germany. To mark their resentment, some of Germany’s most famous football stadiums lit up in rainbow colors as the 2014 World Cup champions played Hungary.

He didn’t even have to be on the pitch to grab headlines. One of the biggest talking points to emerge out of Euro 2020 so far has been Cristiano Ronaldo’s disdain towards sponsors Coca-Cola. In Portugal’s first press conference, the five-time Ballon d’Or winner picked up two glass bottles of Coca-Cola kept in front of him, set them aside and held up a bottle of water instead. ‘Agua‘ he said, the Portuguese term for water.

Not only did the video become viral, the Juventus star’s action became internet fodder for memes and jokes. Fellow footballers started participatng in the trend, Italy’s Manuel Locatelli repeated Ronaldo’s snub to celebrate his brace while France midfielder Paul Pogba took aim at another sponsor, removing a Heineken bottle in front of him during a media meet.

Other brands were quick to make the most of the opportunity as Fevicol, Zomato, Amul reacted with their own marketing strategies. Coca-Cola, which is also one of the official sponsors of Euro 2020, replied with a statement that ‘everyone is entitled to their drink preferences.’ However, the company lost $4 billion in market capitalisation.