Gnanasekaran Sathiyan, who became the first Indian since Sudhir Phadke in 1976 to reach the asian championships quarterfinals

Over the past year, Gnanasekaran Sathiyan has made some new ‘friends’ on the table tennis tour. He’s now gotten used to the mighty Chinese, who otherwise remain content in their own circle, passing pleasantries with him whenever an opportunity arises. On Tuesday, he came across something new.

At a team practice session on Tuesday, during the Asian Championships in Yogyakarta, Indonesia, the Chinese contingent — which had the likes of world no 1 Xin Xu, world no 2 Zhendong Fan and world no 4 Gaoyuan Lin in the midst — entered the training hall and approached the 26-year-old.

“‘Oh,’” Sathiyan recites what world no 25 Wang Chuqin said to him in broken English, “‘you’re too good. You’re too strong.’”

By no means was this a comment made in jest. It was, if anything, an acknowledgment by the Chinese, and a hearty welcome to the elite club of table tennis players. And it was a word of appreciation that Sathiyan had earned. A day before, after all, during the team event, the Indian pulled off an upset win over world no 5 Tomokazu Harimoto of Japan – “The biggest win of my career,” he says, before adding, “so far.”

By Saturday, in the singles event, the Chennai-lad became the first Indian player since Sudhir Phadke in 1976 to reach the quarterfinal of the continental event. The run ended at that stage, when Sathiyan lost 3-1 to an in-form Lin, but not without the Chinese being pushed out of his comfort zone.

“I came into this tournament with expectations from myself. I wanted to pull off some upsets — the Asian Championships is almost as good as a world championship because all the top players are here,” he says. “What I didn’t know is that I’d equal a 43 year old Indian record. But I’m just happy with the way I played some bold table tennis and sent a strong message to the Chinese and Japanese.”

The friendship of the Chinese comes with an underlying message that table tennis’ most dominant nation is eyeing Sathiyan as a potential threat. Earlier this year he rose as high as 24th in the world and beat the likes of former world no 3 Chih-Yuan Chuang of Taiwan and current world no 16 (and former 6th-ranked) Chun Ting Wong of Hong Kong. Both those wins came at the Asia Cup, and with the help of a tweak in his serve.

But those same moves would not have helped him against Harimoto, nor would it have put any challenge up in front of Lin.

“I know they’re keeping a close eye on me. So I have to keep evolving,” he says. “You can’t keep playing your usual game. The process has to keep changing. The top players have already analysed your game, so if you keep playing the usual, you won’t create any doubts or threats.”
Against Harimoto, Sathiyan put to test a new tactic — attacking the opponent’s serve.

The Indian’s usual style involves him playing a consistent return of serve and then play aggressive ground strokes as the rally goes on. Against the top players though, that is not enough.

“When you start off with a slow shot, the opponent comes in a strong position very early and can finish off the rally,” Sathiyan says. “It was necessary to step up a gear. Harimoto was not expecting that kind of fast returns from me.

“Then he started to try other things he had not planned for, and he was getting out of his comfort zone. It became a mental battle because he was trying different things to stop me, and some of those things were actually something I was comfortable with. So he kept second-guessing himself.” 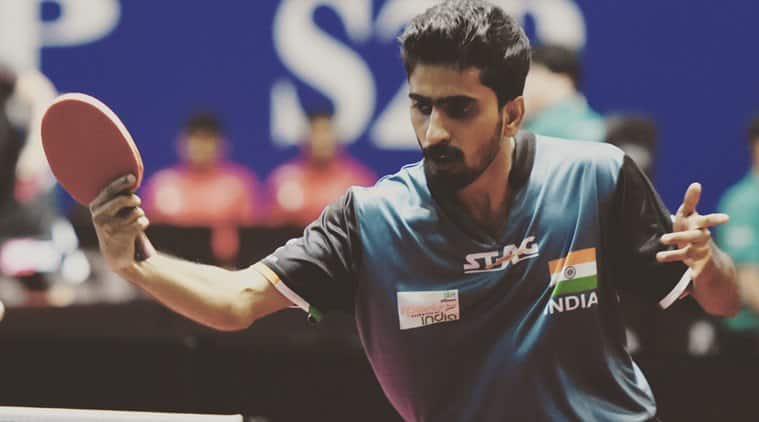 It’s the little changes that have made the biggest impact for Sathiyan, and he’s taken pleasure and confidence in every spot of bother he puts his higher-ranked opponents through. He remembers well how he forced three-time Olympic gold medallist Ma Long to take a time-out during the Asia Cup in April.

“That moment will forever be a badge of honour for me,” Sathiyan had said at the time. He pushed Lin to take a time-out as well, just days after picking up his career’s biggest win against Harimoto. And he promises to do much more, but not just because of his own self-belief. His opponents know it too. They have, afterall, inducted him into their ‘winners circle.’

“It’s more friendly now,” he says, about his rapport with the top-ranked players. “Lin comes and has conversations now — who’re you playing, when are you playing. They do consider us as big threats to their Olympic goals. Now we (Indian team) have the belief that we can challenge them. And they know we can compete too.”