Hima still needs to qualify for the World Championships, and from there on work even harder to claim a ticket for the Tokyo Olympics 2020 in order to mark herself out as one of the world’s top athletes.

Hima Das received as much, if not more, attention as the Indian cricketers this month with the sprinter winning a series of gold medals in various competitions. The flood of tweets and media reports focusing on the Indian athlete has been refreshing as well as positive for the sport.

But where do we place these competitions in terms of their importance, value or even difficulty levels when their purpose is to help her prepare and advance to bigger competitions like IAAF World Championship in Athletics and the Olympics next year.

Hima, who won the U-20 World Championships last year, grabbed her fifth gold of the month on Saturday as she returned to her pet event, the 400m race, in the Czech Republic. She clocked 52.09 seconds, a season-best for Hima, overtaking her previous timing of 52.88 seconds, which she had recorded in Patiala earlier this year.

From the Indian Army to Bollywood stars to Prime Minister Narendra Modi, congratulatory posts have flooded Hima’s Twitter feed, who has been tagged as India’s ‘golden girl’ and India’s next potential Olympic medallist. But there is more than what meets the eye. Not many are aware that Saturday’s women’s 400m event was an all-India race, with all the other athletes taking longer than 54 seconds to cross the finish line. 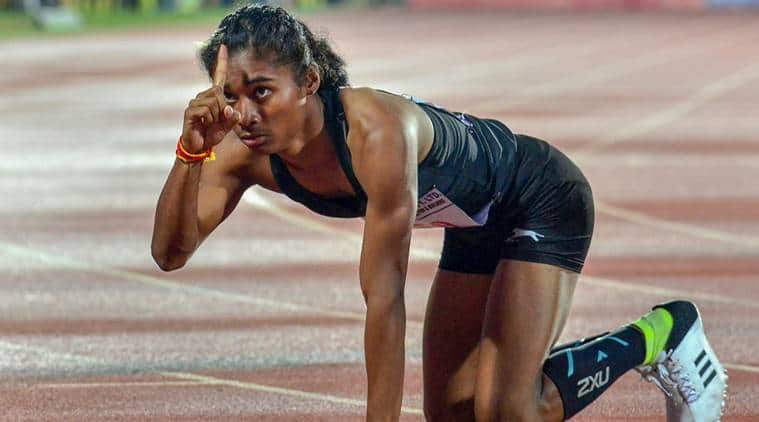 Hima faced lack of competition over the last month in Poland and Czech Republic. (Source: PTI)

As important as it is to celebrate achievements, it is equally important to not lose perspective by getting caught in the social media game. The 19-year-old clocked 23.65 seconds and 23.97 in Poland, 23.43 and 23.25 seconds in the Czech Republic to win four successive 200m events. Her timing of 23.25 seconds, her best performance among these four, was the 128th fastest 200m lap run in the world in the year, as of July 22. 128th! Yes, you read that right! 128th!

A couple of years ago, the Indian Under-17 football team beat a lower-tier side of the Italian league but the Indian media ran it with headlines- ‘Indian U-17 team defeats Italy U-17’. However, lost in the translation were a few important details. The team India beat was not the Italy U-17 national team but in fact Italy Lega Pro U-17 Representative, a side comprising youth players from clubs in Lega Pro and Lega Pro 2, the third and fourth-tiers of Italian football.

Hima’s gold medals over the last month in Poland and Czech Republic, since they were won against a lack of competition, could be put in the same category. None of the 20 athletes she has competed against over this period have a better personal anywhere close to the figures Hima had achieved last year. The immediate target for Hima is to qualify for the World Championships. (Source: AP)

The immediate target for Hima is to qualify for the World Championships, scheduled in September, and the series of golden performances this month are only stepping stones to that competition. The qualifying mark for 400m, Hima’s strength, is 51.80 seconds (she recorded 52.09 in Czech Republic) and the 19-year old will get another chance to qualify when she steps onto the track at the Senior Athletics Inter-State Championships happening in Lucknow in late August.

Meanwhile, 24-year-old Indian sprinter Mohammed Anas Yahiya completed the 400 metre event in 45.21 seconds to make it to the World Championship, also setting a new national record in the men’s category.

Hima still needs to qualify for the World Championships, and from there on work even harder to claim a ticket for Tokyo Olympics in order to carve out her own niche as one of the world’s top athletes.

Torch relay for Tokyo Olympics kicks off its 121-day journey