Navdeep Saini celebrates the dismissal of Sri Lanka’s Danushka Gunathilaka. He was clocked at 151.1 kmph during the second T20I in Indore. (AP)

Shared News| January 8, 2020 8:22:38 am
In the days to come, Navdeep Saini might be tempted to watch Danushka Gunathilaka’s dismissal on loop. The left-handed Sri Lankan batsman had backed away and was making room for an expansive lofted cover-drive. That’s when he realised that he had mis-judged both the line and length of the ball that snuck under his bat and clattered the stumps. There was no late swerve, Gunathilaka was beaten by raw pace. Even Saini himself seemed surprised by the perfection of his 147 kph delivery.

The beauty of the dismissal was its length. Batsmen, in this format, don’t expect the full-length ball – it was slightly short to be called a yorker – in the middle overs. It’s usually a death-over weapon in this format, or when there’s some movement off the surface, which the placid Indore surface barely offered. 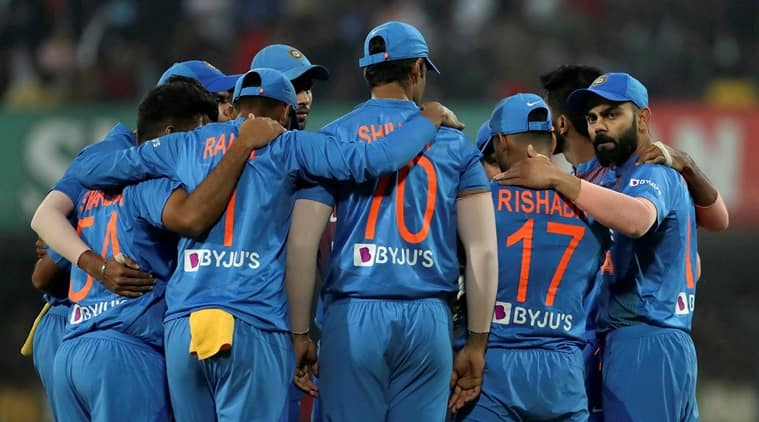 Anyway, Saini is not someone who seeks or thrives on swing. He’s more of a back-of-good-length bowler, looking for marginal deviation off the seam. More often than not, he banks on pure speed and skiddy bounce.

Pure speed is a precious gift on any surface in any format. It was priceless on a shirtfront surface in Indore with its short straight boundaries. Though it was a collective bowling performance, his 4-0-18-2 stood out as India restricted Sri Lanka to an underwhelming 142/9, which India surpassed in 17.3 overs.

As much as his eye-blinking speeds, his versatility of lengths stood out. He would keep batsmen guessing with his lengths—straddling between back-of-length, short and full. His pitch-map validates—four fullish deliveries, eight short ball and 12 back-of-length ones. One of those short-pitched balls earned him the second wicket, hustling Bhanuka Rajapakse to a pull shot. It was a superbly directed short ball, at the left-hander’s body, cramming him for room, cramping him for wriggle room. The replays captured the story. The short-ball flew off his gloves even before he had swiveled into the shot. And it was not even a trampoline surface. If Gunathilaka’s wicket stalled Sri Lanka’s progressed—they were cruising at 54/1 at that stage—Rajapakse’s shut out their last flickering hopes of amassing a total that would at least test this indomitable Indian batting line-up.

It also capped a remarkable recovery for Saini. The Delhi seamer, still cutting his teeth at this level, bled 10 in the first over. The free-scoring Avishka Fernando had struck a couple of boundaries, a brutal pull following a gorgeous straight drive. Virat Kohli immediately took him off the attack. He might have felt a sense of deja vu. In his previous T20 outing, against South Africa, he was plundered for 25 in two overs, counter-balancing what has otherwise been a steady start to his career.

But the past didn’t frazzle him. Saini is a no-frills bowler. He doesn’t have a wide range of new-age T20 tools. A well-disguised scrambled-seam slower ball and an occasional cuttter, both he uses sparingly, that’s pretty much his T20 tool-kit. But he does not need such weaponry when he has the pace to rattle the batsmen – he clocked 151, averaged 141. The Sri Lankan batsmen could only eke out eight runs from the next three overs, and in T20 cricket, or in any limited-overs format, the numbers are pure gold.

He wouldn’t have chosen a better moment to illustrate his capabilities that on the night India’s No.1 bowler Jasprit Bumrah returned after a stress-fracture induced four-month sabbatical. The premier pacer looked a touch restrained, bowling within himself and operating in the late 130s. Maybe, he was not rushing back to his optimal speeds, or maybe, he was cushioned by two impressionable accomplices bowling as menacingly as they ever had at the international level. Rare as their breaks are, they made full use of it. Shardul Thakur is unlike Saini. In fact he’s the diametric opposite. He is not as pacy as Saini is—the effort ball clocked 141 and he plugged away at an average speed of 131. He doesn’t make batsmen hop around in fear, is prone to feeding batsmen with too many hittable length balls. But he has worked his way through his limitation and added more variations.

Unlike Saini, Thakur needs variations to thrive. So he has a knuckleball, which he has been over-using of late. But it was the perfect weapon against Sri Lanka’s No.9 Isuru Udana. He accounted for Dhananjaya de Silva with a yorker. The batsman read the ball, but ended up miscuing it to the mid-off fielder. He has a slower-ball yorker, a conventional back-of-the-hand slower ball and the leg-cutter. The retooled skillset has made him a deadlier bowler in the format than he had been at the start of his career. It’s time he’s considered among the hottest contenders along with Saini for a World T20 spot.

It is baffling to think they are probably India’s third-choice pace-bowling combination in this format. There’s Bumrah, Bhuvneshwar Kumar, Mohammad Shami and Deepak Chahar above them, and it’s an attestation to India’s fast-bowling riches that on a night Bumrah was average and the rest were absent, they still won the match on the shoulders of two young seamers, Saini and Thakur. One has a bag full of variations, the other doesn’t need any. Together, they put to shade one of India’s finest. If the crowd came to watch Bumrah’s return, they went home wondering about India’s back-up pace bowling options. And that Gunathilaka’s dismissal would be playing on a loop in their minds.