All-rounder Shivam Dube at No.3 provided India with firepower at the top in the second T20 International at Thiruvananthapuram. (PTI)

Shared News| December 11, 2019 7:57:59 am
In the T20 World Cup season, the fretting has already begun: That India don’t set targets as well as they chase down. Not that their successful chase in the first T20 game against West Indies was clinical. It took a high-risk approach from Virat Kohli, who likes to bide his time for a while before he starts rolling.

It was a sensational knock from him that got India over the line but his batting approach does tend to jack up the requiring rate and he has to then play out of the skin to pull off a win. Never mind that game as the asking rate was pretty high from the start and it might seem churlish to pick on an awesome knock but we have seen a curious sense of caution from him often over the years, be it in IPL or in international T20s.

More importantly, it’s just not him, the Indian T20 batting as a whole has a sense of lethargy about it. Barring KL Rahul, who likes to fire away from the start, the rest tend to almost bat within themselves. And no wonder, it comes to the fore when they bat first without the guiding hand of the target to force them.

Rohit Sharma likes to take a few balls and no harm in it as he is the opener and more often than not tends to make up by the end of Powerplay itself. But when saddled as he was with Shikhar Dhawan, whose T20 batting was a bit of concern as he would seem content to roll along run-a-ball or less, the situation would get a bit tight. Now with Rahul, Sharma has more breathing space to continue with his preferred innings-building approach. 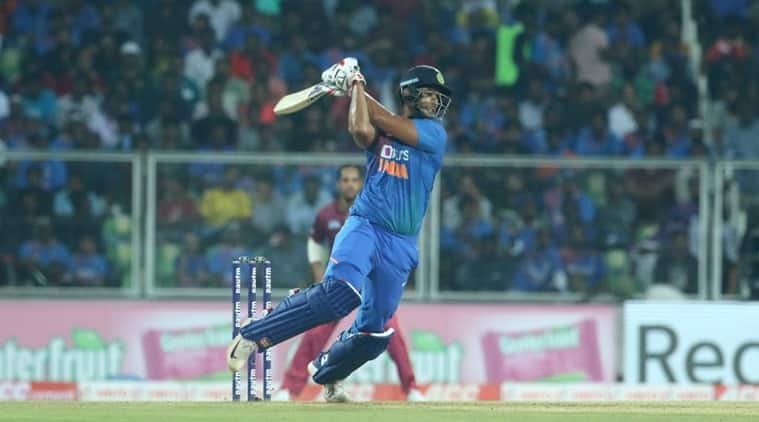 Shivam Dube bats vs West Indies in the 2nd T20I on Sunday (Twitter/BCCI)
Indians tend to bat without overtly worrying about the strike rate. As if they are hellbent on making the T20 format play out like 50-over game, if you get the idea. They rarely indulge themselves; but like to play along a few overs and see what happens. Does a bowler crack under pressure in the last half of the game?

In franchise cricket, maybe they do, but not always in an international attack. Then the pressure keeps building up, and suddenly they are left staring at a situation of 25-30 runs short. So, it was good in that respect to see Shivam Dube walk out at No.3 in the second game. Not that it worked but it seemed to suggest that the team is thinking to do something about intent.

It’s clear that they have to do something. Rishabh Pant is vital and even more so is Hardik Pandya, when he returns. The final assault can be left to those two but the middle order needs to do lot more.

Kohli’s case is most interesting. He has the run tally in T20s but he can still give the impression that he hasn’t yet cracked the format. Perhaps, its this format that throws up the biggest challenge for him still. A batsman with conventional array of shots – apart from those dazzling swat-flicks of course – and who targets traditional areas is almost forced to extend himself in this format.

But he can come across a bit reluctant. He is one of the best in Tests and has the 50-over game worked out insanely well. In those formats, he can afford to play almost within himself but the T20 puts the sternest test on him. 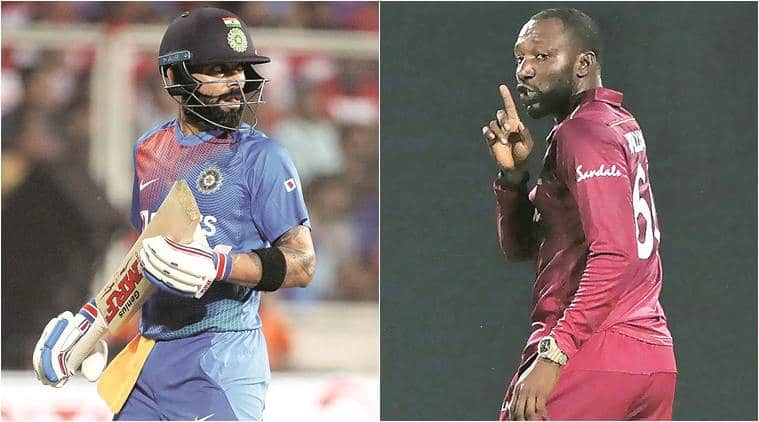 West Indies’ Kesrick Williams gestures after dismissing Virat Kohli during the second T20I in Thiruvananthapuram on Sunday. (AP)
In IPL, you could still understand it a bit; perhaps it’s the presence of AB de Villiers and other hitters around him that sort of pushes him towards that approach. Everything looks hunky dory if he bats for the majority of the overs, then not only does he catch up but makes sure the opponents are punished.

But every now and then, it does throw up pressure on the other batsmen if he gets out after batting for say 25 balls for run-a-ball or less. The other batsmen then have to make up the run-rate and they fall short.

Perhaps, that was one of the reasons Dube was tried out at No.3 to see if he can fire away from the start and then Kohli can get a better idea of a potential target to set when he comes to bat.

The puzzling thing is that the Indian batsmen have the game to amp it up, as Kohli showed in the first and as Sharma has shown in the past, especially in IPL, but perhaps its time to shrug off the internal shackles and let it flow a bit.

Else, the same middle order problem that killed their 50-over world cup dreams can return to haunt them at T20 as well.

Unless they start extending themselves in the games in the next couple of months, they won’t quite know how much they can push and extend themselves. It’s one thing if you don’t have the arsenal but it would be a pity when you have the power game, and shy away from deploying it.