IPL 2019: Delhi Capitals stumble to their third defeat at Feroz Shah Kotla, yet again undone by the opposition spinners, this time against Mumbai Indians.

Caned for 10 runs in his first over, Rahul Chahar scythed through Delhi’s top-order, consuming Shaw, Dhawan and Iyer, in the second spell. (IPL)

Delhi Capitals have capsized under tepid circumstances in three of their four home matches this season. Even against Kolkata Knight Riders, they should have won quite convincingly, but they fluffed up a straight forward chase and took the duel into the Super Over. In the end, it was Kagiso Rabada’s toe-crushing yorkers that bailed them out. Delhi’s batsmen need to take bulk of the blame for such calamitous implosions at the Feroz Shah Kotla.

Ahead of their encounter against the Mumbai Indians, Delhi’s head coach Ricky Ponting insisted that their batsmen had got a measure of this slow pitch. “It should not be difficult for us anymore. We have an understanding of how this wicket is going to play. As expected, it is going to be quite slow and low and we expect it to turn a little bit. More than us, I feel it would be difficult for Mumbai to come and play here,” Ponting had quipped on the match-eve.

The head coach’s comments cut little ice, considering another shoddy performance from their top-order. A chase of 169 was not going to be easy, given the nature of the track and Mumbai’s potent attack, which boasted of spinners such as Rahul Chahar, Krunal Pandya and Jayant Yadav. Delhi got off the blocks with a quickfire 49-run partnership between Shikhar Dhawan and Prithvi Shaw. Once Dhawan departed to Chahar, it inexplicably triggered panic in Delhi’s dug-out. The rest of the batsmen neither found the measure of the pitch nor Mumbai’s bowling, led admirably by the impressive Rahul Chahar, who dented Delhi chase with three vital scalps. Consequently, from 49/0, the home team finished at an abysmal 128/9, to go down by 40 runs. The win galvanised Mumbai to the second spot in the league table.

Armed with a prodigious leg-break and ample flight, Amit Mishra is quite a throwback to the classical leg-spinners who thrived in the late 1990s and early noughties. Despite the seemingly anachronistic ways, the 36-year-old has been fairly prolific in this frenetic universe of the IPL. On Thursday, he was up against a rampant Rohit Sharma, who was unbeaten on 30, and looked poised for a big haul. On cue, Mishra unfurled a length delivery that not only turned sharply, but also kept a touch low.

Consequently, he played all around it to get his stumps rattled. Delhi Capitals veteran leggie drew first blood and in the process also took his tally in this format to 150 wickets, putting him second to just Lasith Malinga in the list of the highest wicket-takers.

His twin scalps against the Chennai Super Kings in the season-opener notwithstanding, Mishra has been fairly tepid this season. After sitting out for four matches on the trot, he found his groove in the previous match against the Sunrisers Hyderabad. 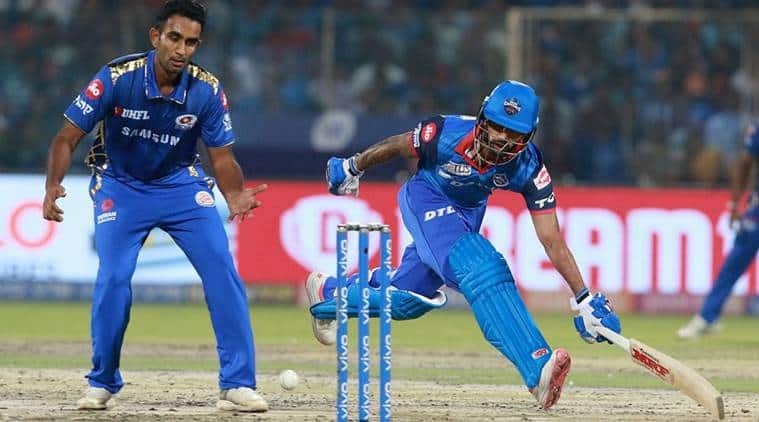 Tonight, he found an ally in Axar Patel. Like Mishra, the left-arm spinner has been operating in the shadows of his team’s illustrious fast bowlers such as Kagiso Rabada, Ishant Sharma and Chris Morris. But a slow Kotla track with low bounce helped Patel exert a stranglehold on Mumbai. In the midst of this choke, he also chipped in with the wicket of Ben Cutting to finish with 1/17 from four overs. When Delhi’s spinners were operating, batting looked arduous. In fact, Mumbai had managed to score just 104/3 after 15 overs.

Without the desired impetus in the middle overs, Mumbai’s innings looked like meandering into oblivion. After 17 overs, their score read a below-par 118/4. Surprisingly enough, the mood in the dug-out was upbeat. The reason was the presence of the Pandya brothers at the crease.

The stage was set for them to have a dash at the fag end. Krunal got into the act, as he drilled Keemo Paul past the third-man boundary in the first ball of the 18th over. This was followed by a thunderous six by Hardik that was bludgeoned over the long-off region. Sensing an opportunity, the all-rounder went on an overdrive, smacking a boundary and a six off Morris in the penultimate over that propelled Mumbai past the 150-run mark.

Morris hurt by the World Cup snub, clearly looked out of sorts. The Protea was erratic in his lines and conceded 39 runs from three overs, which hurt his team’s cause in the death overs. The Pandyas blitz enabled Mumbai earn a crucial 50 runs from the final three overs. Krunal remained unbeaten one short of his half century, while his brother’s 15-ball 32 meant their fifth-wicket alliance swelled to 54 runs in 26 deliveries. Their vital cameos propelled to the ascendancy at the half-way stage.