Setbacks and griefs, both personal and professional, have shaped Jonny Bairstow. Now he is in the centre of the English revival which itself has its roots in the rubble of the 2015 World Cup debacle.

Shared News| Updated: May 28, 2019 8:37:49 am
Every team has a player who sums up its key characteristics and central philosophy. For England, that man is Bairstow, whose self-expression has helped the team get over its ingrained caution and mistrust.
Jonny Bairstow sat on the couch facing sports psychologist David Priestley. He wanted to sort out his mental approach to batting. The chat lasted 10 minutes. Priestley wanted Bairstow to pen down the basic principles of his game. Shortly, Bairstow wrote: See the ball, hit the ball, dominate, keep it simple. Priestly read it, pushed it back and simple said: “That’s your blueprint. Use it.” Bairstow laminated the paper and carried it in his kitbag. The clarity was what he needed then.

Clarity was again in abeyance in March 2015 at the England team meeting after they had been jettisoned out of the World Cup. It turned out to be blame game, with players and coaches venting out their ire. “Not many people looked at themselves,” Eoin Morgan, the captain, recalled to The Times recently. But it was clear to Morgan that England were done in because they were playing in an anachronistic way. Window-watchers, as the rest of the cricketing world zoomed past them. Couple of months later, Andrew Strauss took over as director and Trevor Bayliss as coach and Morgan was retained.

Since the 2015 World Cup, England have crossed 300 38 times. Not a single Englishman featured in the top 15 fastest ODI centuries’ list till three years ago. Now there are four entries: Jos Buttler, Jason Roy, Alex Hales, and Bairstow. Between 1999 and 2014, only 30 scores of over 300 were registered. In the last three years, there have already been 33 – eight over 350 and three over 400. There were seven scores over 200 in last year’s Natwest T20 Blast at Trent Bridge.

It’s just not the change in thinking but also the pitches that has helped in this transformation. Even India doesn’t produce such pata tracks, even in the IPL. So much so that last May, Gary Barwell, head curator at Edgbaston, had said that if England wins the World Cup, “I’d like to think the groundstaff around the country will have played a small part in their success.”

Buttler, Ben Stokes, Moeen Ali, and Joe Root have rallied brilliantly around Morgan to put England as one of the favourites this time around. But it’s Bairstow’s story that perhaps best captures the transformation.

Whereas Morgan, Buttler, Stokes and Ali are natural hitters of the ball, and Root’s role is well defined as that of the anchor, Bairstow has had to shrug off his mental blues, rediscover his childhood love, and reinvent his game. Just like English cricket itself, in some ways.

In the 90’s and the aughts, you could see the hesitancy in English batsmen, even on flat tracks. They would rarely let themselves go and indulge. Being so used to pitches that did something, an ingrained caution and mistrust was ever-present. It would even come across on flat tracks as they couldn’t just trust the surface and let their hands flow.

Self-expression was a distant dream. Now you see a Buttler playing an audacious scoop over fine-leg or Bairstow scything through the onside. As he did repeatedly this IPL, Bairstow has once again become a boy, messing around joyously with his father David, a popular Yorkshire cricketer of his time. 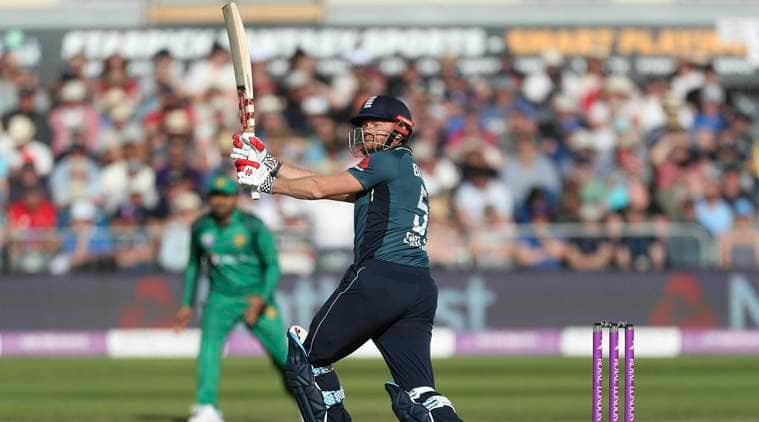 England’s Jonny Bairstow in action during the One Day International cricket match against Pakistan at the Bristol County Ground, Bristol, England, Tuesday, May 14, 2019. (David Davies/PA via AP)

On a cold January night, an eight-year old Jonny walked in to his home at 8.30 pm, with sister Becky and mother Janet, to find his father had hung himself from the staircase. David had been suffering from depression but to this date, the family doesn’t really know why he did what he did. Just couple of hours before his suicide, David had booked a table at a restaurant for dinner with his wife. Couple of months earlier, Janet had learnt that she had cancer and life at the Bairstows had turned topsy-turvy. Then this.

The day after the death, Janet, who was in the police force then, sent the kids to school. Jonny was angry with his dad in the immediate aftermath. “When things were at their darkest and the grief in me was raw and at its worst. The feeling came and went again, wiped away because I realised he loved us and I realised, too, how desperate he must have been to make the choice he did.”

It was at a neighbour’s house, one evening shortly after the death, that perhaps turned him around. He stood next to his mother, staring out of the window at the garden, when he quietly said, “Don’t worry, we will be all right.” He doesn’t remember saying it but his mother Janet did, and would remind him years later at how mentally strong he was even as an eight-year old.

His autobiography ‘A Clear Blue Sky’ is a remarkable tale of a boy’s love for his father. Page after page, he recreates the scenes with his hero, recounts what his father’s peers thought of him, sighs over the missed moments of what could have been – it’s difficult not to be moved reading it.

The mother’s cancer would spurt up again, forcing a distraught Bairstow to rush from an Indian tour to get to the hospital just before his mother was wheeled into the operation theatre. A kiss on the forehead, and a few mumbles of comfort was all he could give. Luckily, she recovered and remains his emotional recliner.

In late 2015 after the dismal World Cup, his grandfather, who had taken care of him after his father’s death, died and Bairstow responded with a career-turning hundred against New Zealand that helped them clinch the ODI series at home. In late 2015 after the dismal World Cup, his grandfather, who had taken care of him after his father’s death, died and Bairstow responded with a career-turning hundred against New Zealand that helped them clinch the ODI series at home. (AP Photo/Mark Baker)

For 10 years now, Ian Dews, director of cricket at Yorkshire and his mentor, has been urging Bairstow to be Jonny. Be the best he can be, instead of trying to outdo others. Some of the stories reveal a lot about early Jonny.

“When Jonny was 16, there was this lad in club cricket who would hit big sixes and he hit a few that day in Headingley. It was the last ball before lunch, and we all thought Johnny would defend like any sensible lad. Instead, he walked down the track and hit a six out of the ground. He walked into the dressing room saying, “Did you see that? My six was bigger than anything he did!”

It all changed during the Cape Town Test in 2016 when in the company of a marauding Ben Stokes, Bairstow came up with his first ton, a composed measured knock against South Africa.

“Old Johnny would have been in competition with Stokes. If someone hit a six, he would want to hit a bigger one. That day in Cape Town, he realised he didn’t have to become bigger, better than anyone else: that he could just be Johnny.”

Dews tells this newspaper. “I think it was such a phenomenal knock by Stokes that Johnny realised that he couldn’t better it. He didn’t have to be in competition. That he could bat carefully and that’s what was best for the team. From then on, he hasn’t looked back.”

Flaming hair and ginger beard has given him the nickname Ron Weasley after the Harry Potter character, and growing up, he was good at most sports. “Rugby, Football (he was with Leeds juniors from age of 7 to 15), hockey. It was clear that whichever sports he finally decided to go for, he was going to be a good player. How good, nobody knew,” Dews says.

Not only was he good at cricket but Bairstow wanted to be involved in everything. “At one point, for our club, he would open the batting, open the bowling (he would bowl good seam-up), and later, bowl spin, again both off and leg-spin. And of course, he was always ready to keep wickets! It was insane!” Dews laughs.

If he couldn’t be in the thick of action, Bairstow would get bored and doze off. “Oh yes, the sleeping. I have come to dressing room at lunch and seen him take a 20-minute nap after he had his food. He would sleep in the team bus. He could sleep anywhere, anytime if he wasn’t doing anything.” 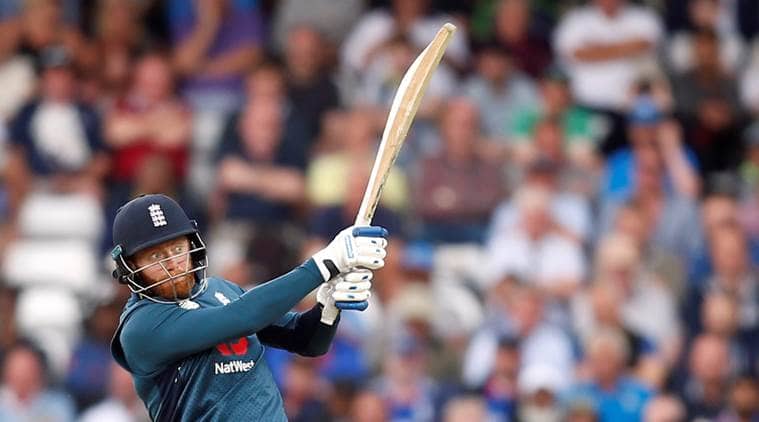 Flaming hair and ginger beard has given him the nickname Ron Weasley after the Harry Potter character, and growing up, he was good at most sports. (Source: Reuters)

Dews played a part in Bairstow’s revival after the horrid 2015 Ashes tour by overhauling his batting technique. One day, just before the county season started, the pair were at the batting nets and decided to tweak his game. Bairstow stood with a raised backlift and found that he was better at being still at the crease as a result. “My original idea was simply to play straight. Get my balance. Get my head and eyes over the ball. I wanted to stop going after deliveries – and I also wanted to start playing them later rather than in front of me,” Bairstow writes in his book.

Dews, who was feeding the balls from the bowling machine, remembers one shot in particular from that afternoon. “He hit the ball so high and hard that it punched a hole in the wall behind me. He had started to hit the ball so hard that I thought I needed a helmet.”

“If there is criticism of him, he would make sure he goes and does exactly that – only better. And he would go, ‘see, I told you I could do it’,” Dews says.

Like he did last November in Sri Lanka. He had had an injury and in the interim, Ben Foakes had been given the gloves, and Bairstow was kept out of the second Test despite regaining fitness. In the third game, he played as a specialist batsman at No. 3. And he had more deaths to come to term with. Two of his friends had died in the previous couple of weeks.

He responded with a hundred and hit out at his critics. “It means a lot. I’m desperately proud. Two people I knew at home have passed away in the last couple of weeks, so it puts things in perspective. It just shows that we’re playing a game of cricket. These last couple of weeks have been tough. People who don’t see the hard work and the graft that’s going on. If you look at the challenges that have been put in front of me as a cricketer. I’d like to hope I’ve come through them all.” No one can deny that.

English old-timers recall a knock from his father David in 1980, in an ODI against Australia, when he told his team-mate Graham Stevenson when he walked out to bat at a tense situation in the game. “Evening lad, we can piss this.” They won that game by two wickets and seven balls to spare. Jonny perhaps doesn’t have that nonchalance but his lived experiences have moulded him into a character who refuses to give in to the vicissitudes of life.

As he puts it: “Life goes on. It must. And you have to catch happiness as it flies, enjoying it there and then and for however long it lasts.”

IPL 2019 RR vs MI Live Cricket Streaming: When and where is RR vs MI live streaming?