Only the particularly naive would have expected Mary Kom to hug Nikhat Zareen at the end of their fight. Forget the bad blood. The two had just spent the majority of nine minutes hugging each other.

Before the cold shoulders and expletive exchanges, gloating and weeping, was the testy bout that ended 9-1 in Mary’s favour. An anticlimactic end to an exhausting feud, but while the contest itself was highly anticipated, a boxing clinic was never on the cards.

The curious dichotomy that continues to propel an aging Mary Kom is her dirty boxing and clean punching. It’s especially apparent against the taller, stronger boxers in the 51kg division; a move up the weight division that has forced the light-fly ballerina to turn into a flyweight bruiser. With sneaking in, landing and disengaging a riskier ploy against opponents with better reach, Mary goes for clinches. Most of the fight thus was spent in tangles, especially after Nikhat’s bright start.

Amidst all the post-match brouhaha, Nikhat offered an honest assessment of her performance. “I don’t think I lacked anything today. I fought better than I did at the India Open,” she said. While Nikhat had spent a majority of that 4-1 loss in May treating Mary with utmost respect, the 24-year-old played the aggressor on Saturday, launching strikes even though not many connected. The first round was Nikhat looking the best she has recently, minus some mismatched contests in the recently concluded boxing league.

The contest opened with a cagey ten seconds, made to seem a lot longer by the palpable tension. The two circled each other slowly, each willing the other to make the first move. Nikhat ducked and went to the body, the opening shot sank into Mary’s stomach.

But Nikhat reached for her own underhooks as the bout progressed, holding Mary as the two exchanged shots in the clinch. Momentum snubbed, Mary came into her own in the third round, as the increasingly erratic Nikhat left herself open for clean strikes. Only one judge out of ten thought Nikhat prevailed overall, and the second round evidently made all the difference.

Now, whether the ten judges agreed with this evaluation is tough to know. After all, despite Boxing Federation of India (BFI) president Ajay Singh assuring reporters that there were “absolutely no issues in giving you any amount of data”, the detailed scorecards weren’t made available on account of confidentiality, nevermind that one gets round-by-round scores at the end of a televised bout.

Curbing expectations, however, is the way to go. For long, whether the 51kg selection trial bout will happen or not was unclear. That it was open for public was a year-ending bonus.

“Good that it was an open trial and everyone could see. We had 10 judges to ensure the highest standards of fairness and impartiality,” Singh told reporters. “There were representatives from every side. Anyone could come and watch. We delivered on the promise that it would be a fair trial. I don’t think there can be anything fairer than this. The boxers who have won today are absolutely the best in India.” 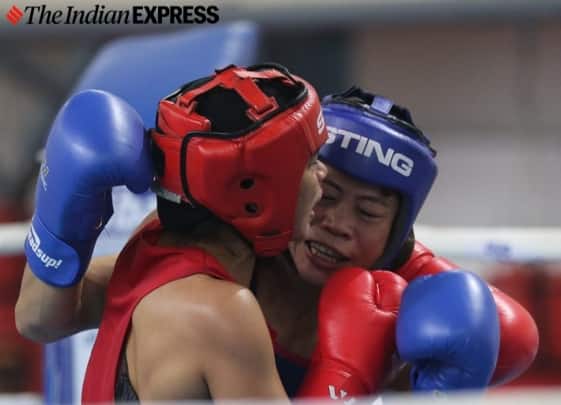 Most of the fight was spent in tangles. Tashi Tobgyal

Mary now goes to Wuhan in February for the Olympic qualifiers, a win there will earn the 37-year-old a ticket to Tokyo. She glanced ahead briefly — “I will give my best. Tokyo Olympics will be my last according to my age (the age limit for boxers at Games is 40)” — but she chose rather to dwell on the past.

“I don’t like all these controversies. If she wants others to respect her then she should first respect others. I don’t like people with such nature. You drag my name into an unnecessary controversy and then you try to posture,” Mary said, referring to Nikhat’s letter to Union Sports Minister Kiren Rijiju in October in which the 24-year-old demanded a selection trial.

But Nikhat had only sent out the letter after BFI had flip-flopped from not exempting Mary for these trials (for not winning gold or silver at the worlds) to giving her a pass (for getting a bronze), before reverting once again. To be fair, Mary had no say in these decisions, and the barrage of criticism didn’t help.

“Did I make that announcement? Whose fault was it, was it mine? I didn’t even know about it, I was told and it surprised me. Because mentally, I was prepared for a trial at that time,” Mary said. “Once the trial was announced, did I say I won’t come? Then why was my name taken time and again?” Ducking the worlds trials in August, after her name had been drafted and her opponent Nikhat had weighed in on the day, is a different matter.

Mary though had the last laugh. All Nikhat can do now is bide her time and wait for a chance to crop up. Ajay Singh confirmed that if Mary fails to qualify in February, there will be another trials for the world qualifiers in May.

“I want to remain positive. I heard the announcement, and that there will be another trials if she doesn’t qualify in February,” Nikhat said.

She’d do well to be careful what she wishes for.