Shared News| January 3, 2020 11:52:38 am
2012 was the year he won the Premier League with Manchester City; the year he drove Italy to the final of the European Championship; the year he appeared on the cover of Time magazine. AP
By Rory Smith

No matter where his career has taken him, Mario Balotelli’s home has always been here, in an apartment block sandwiched between a Volvo dealership and the campus of the University of Brescia. The bottom floor is taken up by a bicycle shop, a piadina joint and an interiors showroom. Balotelli has the penthouse.

He bought it in 2012, when he was not just a sporting phenomenon, but a cultural one, too. That was the year he won the Premier League with Manchester City; the year he drove Italy to the final of the European Championship; the year he appeared on the cover of Time magazine.

He could visit only occasionally while he played in England, but when he joined AC Milan in 2013, he moved in permanently. To the club’s mild chagrin, Balotelli preferred the hourlong commute from Brescia to the idea of moving to the big city.

It remained his base in the three years he played in France, first at Nice and then, briefly, at Marseille. After games, he would return to the apartment late at night, and then make the 250-mile journey back for the next training session.

The apartment sits at the southern pole of what Carlos Passerini, a Corriere della Sera reporter who has covered the peaks and troughs of Balotelli’s career, has called the forward’s “magic circle.” A couple of miles north is Concesio, the village where he grew up. A mile or so east is the Oratorio del Mompiano, the sports club where he first played soccer, and to which he has always gone back, without fanfare and often without warning, to watch the children who dream of following his path. Mario Balotelli could visit only occasionally while he played in England, but when he joined AC Milan in 2013, he moved in permanently. AP

And just around the corner, within easy walking distance, is the Stadio Mario Rigamonti, home of Brescia Calcio, his hometown team. Balotelli was not a Brescia fan as a child; he admitted in 2009 that he supported AC Milan, his honesty apparently unencumbered by the fact that at the time he was playing for Milan’s fierce city rival, Internazionale.

The stadium, though, has long figured on Balotelli’s horizon. There is a view across Brescia, the whole sweep of the city, from the south-facing balcony of his apartment. His bedroom looks the other way. He can see the stadium’s floodlights from its window.

<h4>The Prodigal Who Never Left</h4>
Last summer, out of contract after leaving Marseille, Balotelli had three choices. He could venture into the unknown and sign for Flamengo, in Brazil; he could earn an impossible, meaningless fortune in China; or he could take a substantial pay cut — much of his $4.4 million annual salary is dependent on bonuses — and join Brescia.

His mother, Silvia, cried when he told her he was coming home. His father, Franco, died in 2015, but Balotelli said it would have been a “dream” for him to see his son play for Brescia. “As soon as this offer arrived, I didn’t have another thought,” Balotelli said.

Brescia, as a city, seemed to feel the connection, too. It returned Balotelli’s affection. In the time he had been away, Brescia had changed. He remembers countless instances from his youth of feeling like he stood out: the only black player not just on a team, but the whole field. He once told a teacher that he was trying to “wash the color” off his skin; he asked if his “heart was black, too.”

Now, according to Stefano Brasetti, Balotelli’s personal trainer, the city is “proudly multicultural.” Some 19% of its inhabitants are extracomunitari, he said — people who have come from outside the European Union, drawn by the wealth and the work available in Lombardy, one of Italy’s richest regions. The province is now home to 156,000 immigrants, and Brescia itself has large communities from Pakistan, India, Senegal, Ghana and Nigeria.

Balotelli returned, then, not only to a city that had always been happy to call him “one of our own,” as one staff member at the Oratorio said, but one that had grown comfortable in its polychrome skin. Now, every team, every field, has black players. He could, at last, feel as if he belonged. 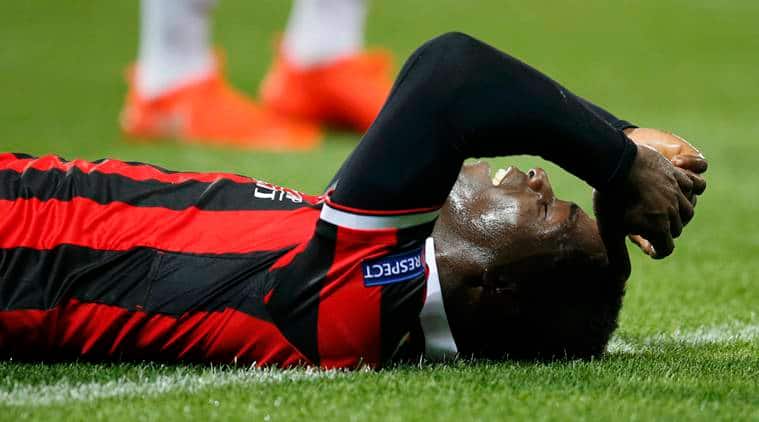 Balotelli had never really left Brescia, of course. He had always had the apartment, his sanctuary. The city had always been home. His only reservation was that Italian soccer had not always been quite so welcoming. AP
During the summer, as he waited to see what his future held, Balotelli worked out at Brasetti’s gym. Occasionally, to improve his fitness, he would go for runs in the city’s parks with his brother, Enock Barwuah. He was stopped countless times and invited to join local pickup games. He never refused.

“For kids, especially, he is a star,” Brasetti said. “Whenever they come up to him, he dedicates himself to them completely.”

It was not just children. The news conference to announce his signing had to be moved to a hotel, such was the crowd that gathered to see him presented as a Brescia player. The Mario Rigamonti was sold out for his first game; fans had lined up for hours to get tickets.

They were drawn by curiosity, and hope, but mainly they were captivated by the story of the prodigal son, playing out in front of their eyes. “It is not possible to ignore the image of that restless and talented child who looked at the Rigamonti from the pitch of the Oratorio in Mompiano, dreaming of Brescia,” the journalist Stefano Scacchi wrote in La Repubblica.

Balotelli had never really left Brescia, of course. He had always had the apartment, his sanctuary. The city had always been home. His only reservation was that Italian soccer had not always been quite so welcoming.

“I don’t know what sort of championship I will find,” he said on the eve of his return to Serie A. “I hope the episodes that happened years ago will not be repeated.”

It is not possible to treat Balotelli’s story as that of simply a soccer player. It is integral to its understanding that he is a black Italian soccer player or, to put it more bluntly, Italian soccer’s black player. He did not make the cover of Time because he was a talented striker; he was featured, instead, because of a cultural significance that had been ascribed to him.

As one friend puts it, in that context, what would success have looked like? Could it have been measured in goals or assists, or was it supposed to be gauged by social change? How many goals would he have had to score, how many trophies would he have had to win, to have met expectations? “He was set a task he hadn’t asked for and that nobody could complete,” the friend said.

In the first few months of his return to Italy this season, it became clear — as Balotelli had feared — that Serie A had not changed at all. The league bounced from one racist incident to another. He was abused in a game at Verona, just as other black players endured racist abuse in Cagliari, Bergamo and Genoa. Now, at 29, that prodigy should be enjoying the final couple of years of his peak. (AP)

Balotelli could not even rely on the support of his own fans. One faction of Brescia ultras — admittedly small, and unabashedly right-wing — released a statement that played down the racism of its Verona counterparts.

A few weeks later, the man who brought him to Brescia, the bombastic club president, Massimo Cellino, responded to a question about how Balotelli was doing by saying: “What can I say? He’s black but he’s trying to lighten himself.” The club later insisted it was a play on words, “a joke said as a paradox,” designed to “protect the player.”

That is the world Balotelli left as a teenager. It is the one he has returned to as an adult. That is the climate in which he has been asked to succeed, in which the tension over who belongs and who does not still lingers. In Serie A, he is still not treated just as a player, but as a black player. He is the bellwether and the test case, co-opted as territory in a culture war. There is always someone to make him feel like it is not his home.

A Life of Whispers

For all the romance of his return to Brescia, for all the city’s warmth toward him, there is still a sense that Balotelli should not be at Brescia. Not yet, anyway. At 17, he was Italian soccer’s great hope: He won the Italian title, and the Champions League, with Inter at 20. By the time he was 22, he was an English champion, too.

Now, at 29, that prodigy should be enjoying the final couple of years of his peak. That he is, instead, embroiled in a desperate bid to avoid relegation with Brescia is proof that his career has not played out as he — or anyone else — expected it to.

Moksh Murgai- The next cricket sensation