Manchester City manager Pep Guardiola said his team would “stand up” and fight for the Premier League title after their dreams of a quadruple were ended by Wednesday’s dramatic exit from the Champions League to Tottenham Hotspur.

Manchester City manager Pep Guardiola said his team would “stand up” and fight for the Premier League title after their dreams of a quadruple were ended by Wednesday’s dramatic exit from the Champions League to Tottenham Hotspur.

City went out on the away goals rule after their 4-3 win at the Etihad Stadium left the two-legged quarter-final standing at 4-4 on aggregate. Guardiola’s side thought a late goal from Raheem Sterling had earned them a place in the semi-finals but the effort was ruled out after a VAR review confirmed that Sergio Aguero was offside in the build-up.

“It is cruel but it is what it is and we have to accept it,” said Guardiola. “After 20 minutes we were 3-2 up. In the second half we created a lot of chances and we scored the goals we needed. Unfortunately, it was a bad end for us so congratulations to Tottenham and good luck for the semi-finals,” said the Spaniard, whose team were also eliminated by English opponents, Liverpool, in the quarter-finals last season.

Guardiola said he continued to back the use of VAR, which also allowed Fernando Llorente’s decisive goal for Spurs despite suspicions of handball. But he questioned the decision reached over Llorente’s goal – which officials concluded had rolled off the Spaniard’s hip and into the net in the wild encounter at the Etihad.

“I support VAR but maybe from one angle Fernando Llorente’s goal is handball, maybe from the referee’s angle it is not,” he said.

A packed stadium had roared City on in the second half with a thundering strike from Aguero 59th minute seeming to send Guardiola’s side on their way to the last four.

“I am so proud of the players and the fans,” said Guardiola. “I have never heard noise like that since I have been in Manchester but football is unpredictable.”

City host Spurs again on Saturday in the Premier League as they battle with Liverpool for top spot having seen their dream of a quadruple end.

Having won the Carabao Cup (League Cup), City are in the FA Cup final and are two points behind Liverpool, with a game in hand, in the league.

“We have to stand up and react. It is a close (short amount of) time and the same team. We can’t think too much now. We have to try to sleep as much as possible and the day before the game we are going to prepare for the game,” he said.

“We have fought for nine or 10 months in the Premier League and still we are there. It is in our hands. Today is tough and tomorrow will be tough too but the day after we will be ready.”

That’s why we love football: Pochettino 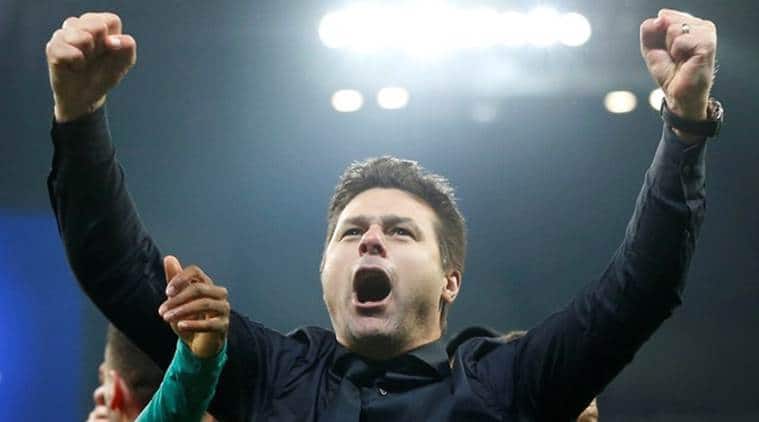 Tottenham Hotspur manager Mauricio Pochettino hailed his team as “heroes” after Wednesday’s astonishing Champions League quarter-final with Manchester City ended in an away goals win for his team after ending 4-4 on aggregate.

The 4-3 win on the night for Manchester City was so nearly 5-3 — and progress to the last four for City — but Raheem Sterling’s stoppage time effort was ruled out by a VAR review which correctly spotted Sergio Aguero off-side.

Pochettino said he had gone through a wild mix of emotions during the final moments as four words flashed up on the big screen – “No goal, VAR, offiside” – confirmed that Sterling’s goal had been over-turned.

“In a moment many things happened in your head, the disappointment was massive but they changed the decision,” he added. “That is why we love football. Today we showed great character and great personality it was an unbelievable game.”

Spurs midfielder Christian Eriksen, who gave the ball away in the build-up to Sterling’s disallowed goal, did not disguise his relief.

“I must be one of the luckiest guys on the planet tonight. I thought it was all over but it was a fun game. It was a rollercoaster, we gave them a lot but also got a lot. It was a weird game,” he said.

Tottenham’s South Korean forward Son Heung-min, whose two strikes were part of the four goals scored in the opening 11 minutes, said it was an unforgettable game.

“I have never seen something like this. It was tough and crazy but we are very proud of our teammates. It was madness,” he said.

“Sometimes you are annoyed with VAR but today it is thank you. We fought together for 90 minutes. We showed unbelievable character and fight.”

Tottenham Hotspur striker Fernando Llorente said scoring the decisive goal against Manchester City that sealed the London side’s progress to the Champions League semi-finals on Wednesday was “one of the best moments” of his career. Llorente’s 73rd-minute goal, which was allowed to stand after a Video Assistant Referee (VAR) review to check for a possible handball, made it 4-4 on aggregate and allowed Tottenham to advance on away goals despite a 4-3 defeat.

The result ensured Tottenham reached the Champions League last four for the first time where they will face Ajax Amsterdam. They made the European Cup semi-finals in 1962.

“To do this with an unbelievable team like Tottenham and be for the first time in the semi-finals of the Champions League with these team mates is crazy,” Llorente added. “I believe in them and I think we can make history.”

City manager Pep Guardiola backed the use of VAR but questioned the decision to award Llorente the goal, which officials concluded had rolled off the Spaniard’s hip and into the net.

However, City defender Benjamin Mendy said they could not complain about the decision.

“We cannot complain about the VAR. Those are the rules and we have to respect them,” Mendy told City’s website. “We don’t have time to think about this because we play Tottenham again on Saturday.”

City, second in the Premier League standings, will play Tottenham for the third time in 12 days when they host Mauricio Pochettino’s side this weekend.