While characteristically boisterous, Akhtar’s critique had significant undertones of a perception that Sarfraz is a ‘yes man’ to the team management.

While characteristically boisterous, Akhtar’s critique had significant undertones of a perception that Sarfraz is a ‘yes man’ to the team management.

Taking the Mickey out of Pakistan

During a conversation with this paper on the eve of the India versus Pakistan match, former Pakistan opener Shoaib Mohammad had rued, “When I look at the Australian dressing-room, I see Justin Langer and Ricky Ponting sitting there. The Indian dressing room has Shastri. Why should we go for foreign coaches?” Noone seems to like Mickey (Arthur) in the house.

Shoaib, the great Hanif Mohammad’s son, who played 45 Tests and 63 ODIs, is said to be close to the current Pakistan Prime Minister – a carry-over of the old cricket camaraderie. He says current players are not so great compared to previous Pakistan teams. “It’s down to talent nurturing, because the coaches that we have across levels, including Mickey Arthur, are “unmitigated failures” in their respective cricket careers. We had a fielding coach (Shahid Aslam) for the senior team for over 10 years who played only 17 first-class matches. Arthur, too, never played international cricket. They might be Level 1, 2 or 3-certified coaches, but unless you have international cricket experience, how would you know the pressure of playing in front of 100,000 fans? This is the reason why our cricket has dropped to ‘ground zero’ level,” Shoaib went on, no-holds-barred.

He spared Sarfraz though. “I have heard a lot of conspiracy theories against Sarfaraz. He should be given more authority instead. His body language shows he has been told off by somebody or the other.” The ex-opener, though, has no sympathy for the coach, Arthur. “Mickey Arthur is there just for the sake of being there. He is just enjoying his time.”

Burgers, pizzas, gulab jamun, but no win on menu

Momin Saqib was student union president at King’s College, London in 2017, but has spent two subsequent summers being Pakistan cricket’s most vocal cheerleader and after the loss to India on Sunday, the team’s biggest jilted lover. His interview where he declared with certainty that the Pakistani team had spent match-eve eating “burger aur pizze” (burgers and pizzas) has gone viral for the breathless rant. His fulminating flagellation then included suggestions like taking them to Lahore and stuffing the burger-pizza eating gluttons with parathas and kadaai, because their lack of sincerity had meant they didn’t know how many calories to consume. In fact, Saqib bellowed, if they had to eat icecream, they ought to all work at Hugo icecream. His fury melted into sobs, adding gulab jamuns and sheesha to the ever-expanding pre-match Pak menu which had led to their “big stomachs” and lame performance. 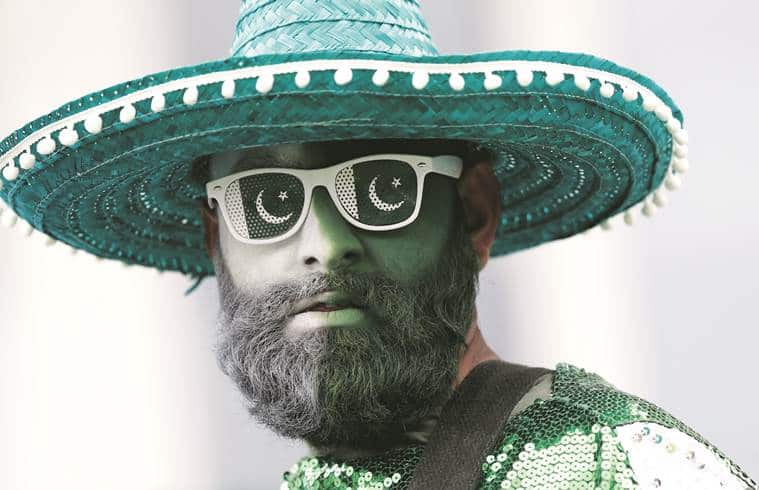 While former players and pundits lambasted the performance of the team against India, Pakistan fans turned to self-deprecation, winning the internet with one-liners such as: “Virat Kohli ki body language se pata lag raha hay ke larka kaptaan hay. Sarfaraz looks like someone woke him up for sehri 5 mins before azaan.” (Reuters)

Saqib in fact, had gained fame, last summer when after Pakistan’s 9-wicket win at Lord’s over England, he had gushed how he hoped the successful players would play cricket till 40 and be blessed with 10 kids each. Warning presciently that if the team improved its fitness, the World Cup team could “beat India by 17 wickets, England by 3 goals and even win in Antarctica” as he raved on. So the heartbreak was a tirade. “Hamein mohabbat hain inse,” he reassured, “Hum support karenge par mohabbat two-way hoti hai. Do jagah se chalti hai,” he added, baring the full force of betrayal, before he urged everyone to flog him. His brother Bilal, who had taken off his sunglasses and wiped his tears, proceeded to wear the shades himself and when urged, punched him once or twice. Earlier, the motormouth who insisted on shredding his team within limits of respect (“respect ke element mein reheke”), had trolled Saif Ali Khan when he was entering the stadium, calling him “Indian team ka 11th waterboy, who in two movies had killed many Pakistanis and admirably fought for his country.” Captain Sarfraz, who he suspected was on sleeping pills (The Yawn), was paid no compliments.

Pakistan TV’s popular cricket show ‘Game on hai’ seemed to have planned a sarcastic opening after Sunday’s game. “Kya mashallah cricket khela Pakistan ne. Brutal, brutal, brutal,” says the anchor. The act didn’t last for too long. The pundit switched to brutal mode very soon. The slightly tempered voice on the panel was that of former Pakistan opener Mohsin Khan. Exactly three decades back, at 18, he was seen in JP Dutta’s Batwara playing an upright cop opposite Poonam Dhillon. At 48, he can easily be flown to Mumbai for character roles, Bollywood’s euphemism for Babuji casting. Listening to him, you know why JP had an eye for talent. Mohsin’s comments have the right poise and pauses.

He is only one on air, showing sympathy towards the much-maligned Sarfraz. If the rest of the panel had their way, they would sack the captain, senior players, administrators and selectors. Even Khan saab, Pakistan PM, finds a mention. Mohsin, meanwhile, talks about his time as coach when Pakistan under Misbah ul Haq defeated England. That’s when Shoaib Akhtar turns the television studio into a Pakistan board conference room of sorts. From sacking the coach, they are now selecting one. “If we built your case, Mohsinbhai will you be interested in coaching Pakistan?” Akhtar asks point blank. Mohsin hums and haws. He remains non-committal. The anchor announces a break with a quiz question. The winner is promised an iPhone 7.

After the break Mohsinbhai seems to have made up his mind. He interjects since the discussion has moved on. “I want to say one thing. People of Pakistan know my record as a player, coach and chief selector. If the cricket board needs me I will give my dil and jaan,” he announces dramatically. He also squeezes in a line that would have made a screenwriter proud. “Mai maangta hun toh sirf Allah se. Mai ek sajda karta hun, mai hazaron sajde nahi karta. (I only ask Allah. I only pray to one, I don’t pray to thousands),” says an emotional Mohsin. Others shake heads, the mood is sombre. Actually, the only time, there was a hint of smile on the faces of the panelists was when the anchor asked the quiz question. “How many wickets did Aqib Javed take in the 1991 Sharjah game against India?” he had asked. For the record, he took 7, that’s 2 more than Sarfraz’s entire bowling unit against India on Sunday.

The cricket they dished out on Sunday may have been mired in mediocrity, but Pakistan’s wit game on Sunday was top-notch. And thanks to them, we might have had a new entry in our cricketing dictionary: raillu katta.

The phrase was all over social media after it was first floated by the country’s prime minister, and former WC winning captain, Imran Khan. “In order to have a winning offensive strategy Sarfraz must go in with specialist batsmen and bowlers because ‘Raillu Kattas’ rarely perform under pressure,” Imran wrote in one of his tweets addressed to captain Sarfraz Ahmed moments before the toss. 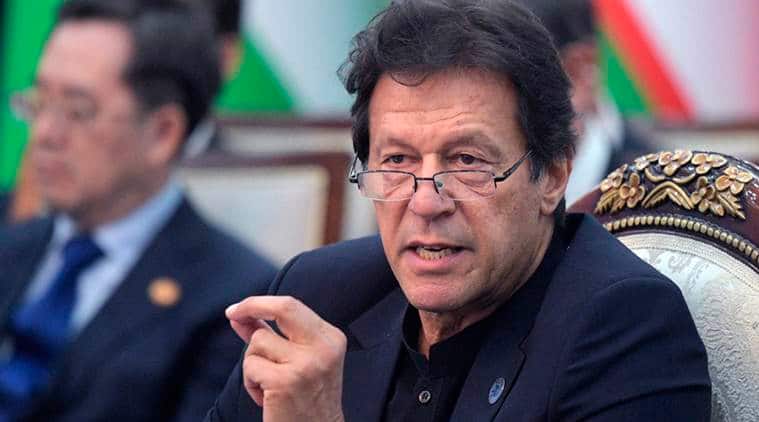 ‘Raillu Katta’ was all over social media after it was first floated by the country’s prime minister, and former WC winning captain, Imran Khan. (Source: AP)

Translated literally, it means a wandering buffalo calf (raillu: wanderer; katta: calf) that has become overweight and is of no use. Now, Pakistani players may have looked like wandering calves on field but in cricketing context, it refers to players who do not bring much to the table.

It is a common term used in street cricket in Pakistan. If the teams are of uneven size, because of odd number of players, one player gets to play for both sides to ensure there is a semblance of balance. Usually, he is the weakest link – last to be picked; a bits and pieces player who doesn’t specialise in anything. The phrase from Indian gully cricket that comes close to it is kutcha limbu.

Uber answer to ‘How to ask Why’

Broadcasters in India have a relatively easy job: the team does well, plenty of centuries or crucial wickets to highlight and praise to the sky. But imagine the task on the other side of the border. Fakhr-e-Alam, also the first Pakistani to circumnavigate the Earth, video jockey and singer, an award-winning actor and PTV Sports presenter sheds some light via twitter.

“Going for POST MATCH on @PTVSp0rts in 15 minutes don’t know how to go about it. Should I pretend it’s all ok and just another bad day at the office for our team or should I raise the raging questions that angry Pakistani fans have around the world? You all tell me…. #PAKvIND”

En route to the studio, he got one key suggestion to his problem. “The gentleman driving me to the studio this morning said he doesn’t care about the rest of the World Cup matches and team Pakistan. The team should stay back in UK & drive Uber. That’s how bad the heartbreak is for a cricket loving nation.”

India vs Australia: Aaron Finch will come good and we’ll be patient with him, says Justin Langer