Shared News| February 28, 2020 8:20:56 am
Ravindra Jadeja and R Ashwin during a practice session. (Source: Twitter/BCCI/File Photo)
Resting his legs on a table, leaning back in his chair in an enclosure over the pavilion, Ravindra Jadeja was lost in his world when Ajinkya Rahane called him out for a sprint after the nets session. His reverie interrupted, he asked Rahane: “Kya baat hain bhai, aur thoda bowling karna hain?” Rahane replied: “Nahin, thoda running karna hain?” Jadeja, smiling impishly, quipped: “Mein to hamesha daudta rahta hoon.” Then he flicked his fingers through his phone, which began belting a Gujarati song, and sprinted down the stairs to the ground. “Chalo, dekhle kaun jeetega!” he challenged Rahane. Aware of Jadeja’s athleticism, Rahane threw in the disclaimer: “Yeh to competition nahin hain.”

The pair began to circle the ground, not quick sprints, but more of a jog, parallel to each other but just before each lap ended, Jadeja would accelerate, break away and turn back at Rahane, who will be a few yards behind him. It was quintessential Jadeja, the energiser bunny of the team, unrelentingly energetic and bubbly.

Until a few minutes ago, he was at the nets, mostly bowling to his teammates, beating them often, throwing challenges, finding something funny in them and bantering, keeping the spirits alive on a tour wherein their fortunes have frighteningly plummeted. For a team that has lost its last four competitive games, his infectious energy could be revitalising. 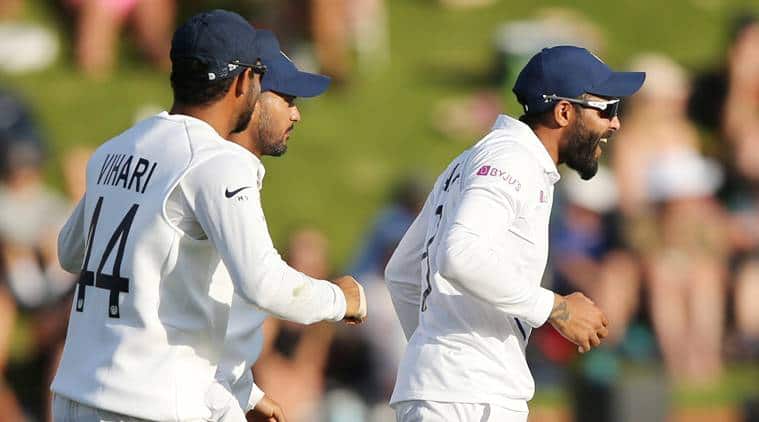 Jadeja’s unbridled energy and effervescence was badly missed in the Wellington Test. As a substitute, he took a low catch of Kane Williamson at short cover off Ravichandran Ashwin, resulting in the only phase of the game where India ratcheted up the pressure on the Kiwis. It’s one of the several aspects of his utility that the team management would weigh in when it finalises the playing eleven for the Christchurch Test. It’s a facet of the game where he scores over his spin colleague Ashwin.

The offie is not a sloppy fielder, was a good slip catcher at the start of his career, one doesn’t see the ball burst through his hands, but he is not as naturally athletic as Jadeja. One doesn’t find him lunging his body to prevent a four, or frenziedly run behind a boundary-bound ball or affect a dead-eye run-out. He is more a chip off the old block, a touch slow off the blocks, reacts rather than anticipates, concedes the chase the moment he understands the ball is winning the race.

Though five-day games don’t prioritise fielding over other facets of the game, skippers get easily sick and tired of slouchy fielders in this day and age. And Virat Kohli has always raved about Jadeja’s vibrancy on the field. “He is probably in the best batting form of his life. Bowling, he is a proper finger spinner, very accurate as well. In the field, we don’t have any doubts about him. I think this is really his best phase as an all-rounder and you want to maximise that,” he recently said.

In that sense, it was surprising that he was left out of the first Test. But should the team management re-evaluate its decision to pick Ashwin over Jadeja in Wellington, their value-addition on the field will be sneaking into the conversation at some point, where Jadeja would score significant brownie points over Ashwin. It could make a strong case, though it’s not the only one, for his inclusion in the Christchurch Test. The primary reference point though will be their bowling, in terms of what the team requires from them in the prevailing conditions.

The debate is not as much about their ability to attack or defend as their resourcefulness on a particular pitch and conditions. There’s nothing literally much to choose between their effectiveness on overseas strips. Jadeja could be a shade more thrifty, but Ashwin brings more variations. Both seamlessly toggle between roles adeptly.

Broadly speaking, their bowling can be explained this way: Jadeja is a defensive bowler who can attack, while Ashwin is an attacking bowler who can defend. Both are smart and experienced enough to straddle either world. So, there genuinely is nothing to choose between them abroad.

Rahane dwelled on it. “See, we have not taken any such decisions. Ashwin had bowled really well in Wellington and he is a quality bowler, Jadeja is also a quality bowler. The decision will depend on the condition of the wicket and the thought process of captain and coach and what combination they have in mind for the team,” he said. New Zealand fielders join the successful appeal to dismiss R Ashwin during the first Test between India and New Zealand at the Basin Reserve in Wellington. (AP Photo)

In Wellington, the wind played an influential role in Ashwin’s precedence over Jadeja, who until then was touted as India’s first-choice spinner overseas. Maybe, the team management reckoned Ashwin’s ability to harness the wind to produce drift could make him a more potent force. Besides, the Basin Reserve tends to get slower without cracking up, so Ashwin, with his variations, adds teeth to the bowling. It’s reputation of bounce, too, could have been evaluated. So as a lone spinner, strictly on bowling merit, Ashwin nosed ahead of Jadeja. And in fairness, he did play his part in Wellington, clearly looking the second best Indian bowler after Ishant Sharma. Maybe, if it were a three-Test series, Ashwin would have been given a more sustained run. Or had India won the first Test.

But the Hagley Oval strip is different. It could be quicker and greener, but not as bouncy, and the surface doesn’t slow up as rapidly as the Basin. Hence, the spinners could be confined to bit-part roles. In such a context, the other virtues of the pair will be computed. Like in fielding, Jadeja holds an advantage over Ashwin in batting. The latter has looked utterly out of touch in recent outings, though he studiously works on his batting in the nets. But somehow in the middle, he seems to have lost confidence. He has never been a great mover of the feet, but had fabulous hand-eye coordination. But somewhere down the line, he lost faith in his batting. A touch slower in judging length, a fraction late in deciding the shot, a wee bit late in reacting, age seems to be catching up with him.

Jadeja is two years younger, but age has only ripened him as a batsman, infused him with a sense of discretion that he lacked in his breezy youth. Over the last two seasons, he has morphed from a counter-puncher to a late-order accumulator, who can be equally defensive and stodgy, with a supreme awareness of the match situation. The defensive technique is sounder and he doesn’t throw his wicket away.

The maturity has automatically manifested into numbers: Since 2017, he has hoarded 996 runs in 31 innings at an average of 49.80. Conversely, Ashwin has eked out only 573 runs at 17.36 with a lone fifty-plus score. Jadeja has rattled 10 half-centuries, that is a 50-plus score in every third innings, and a hundred, thus glossing over the ineptitude of India’s last three batsmen. Ashwin, in his current form, makes the tail appear longer.

So bowling aside, where little differentiates them, Jadeja offers a more complete package. A more in-form batsman, a superior fielder, and of course the energiser bunny of the team. After a few laps, reclining in his chair, resting his legs on a table, leaning back, Jadeja resumed his reverie. Wake him up from that, he would still run a few laps just like that.