Roger Federer rolled into his 13th U.S. Open quarterfinal on Sunday with a 6-2, 6-2, 6-0 victory over David Goffin. (AP Photo/Sarah Stier)

Roger Federer rolled into his 13th US Open quarterfinal on Sunday with a 6-2, 6-2, 6-0 victory over David Goffin. A year after getting knocked out in the fourth round, the five-time champion showed there would be no repeat of that. He rebounded from an early break to win the final five games of the first set and never let up from there, finishing it off with a backhand down the line in a third set that lasted just 21 minutes.

Federer tied Andre Agassi for the second-most quarterfinal appearances at the US Open, trailing only Jimmy Connors’ 17. He had been surprisingly stopped a round short in 2018 by John Millman, preventing what would have been a matchup with eventual champion Novak Djokovic.

Federer lost the opening set in each of his first two matches for the first time in his 19 US Open appearances, but the No. 3 seed has been pretty perfect since while playing the first match of the day in Arthur Ashe Stadium.

The 15th-seeded Goffin broke for a 2-1 lead but that was about his last highlight, as Federer amassed a 35-8 advantage in winners and converted nine of his 10 break-point chances.

Earlier Sunday, Ash Barty was knocked out by Wang Qiang, leaving only one of this year’s major champions in the women’s tournament.

The No. 2 seed and French Open champion was beaten 6-2, 6-4 by Wang, who became the first Chinese woman to reach a US Open quarterfinal since Peng Shuai reached the semis at Flushing Meadows in 2014.

With Wimbledon champion Simona Halep already out in the second round, only top-ranked Naomi Osaka remains among the women who won a Grand Slam tournament this year. The defending US Open champion also won the Australian Open in January.

Osaka, who recently regained the No. 1 ranking that Barty held earlier this summer, was off Sunday after beating 15-year-old American Coco Gauff on Saturday night to reach the round of 16.

Barty won her first Grand Slam in Paris in June and reached the round of 16 in all four majors this season.

“Just because we’ve had a tough hour and a half on the court, it doesn’t reflect on the year that I’ve had or the couple of weeks I’ve had here in New York,” Barty said.

Wang, meanwhile, is into the quarterfinals of a Grand Slam tournament for the first time in her 21st try and will meet Serena Williams.

Gauff was to be back on the court when she and 17-year-old Caty McNally faced the ninth-seeded team of Nicole Melichar and Kveta Peschke in a second-round women’s doubles match.

Daniil Medvedev then follows them onto Louis Armstrong Stadium, where the No. 5 seed was loudly booed during and after his third-round victory Friday. 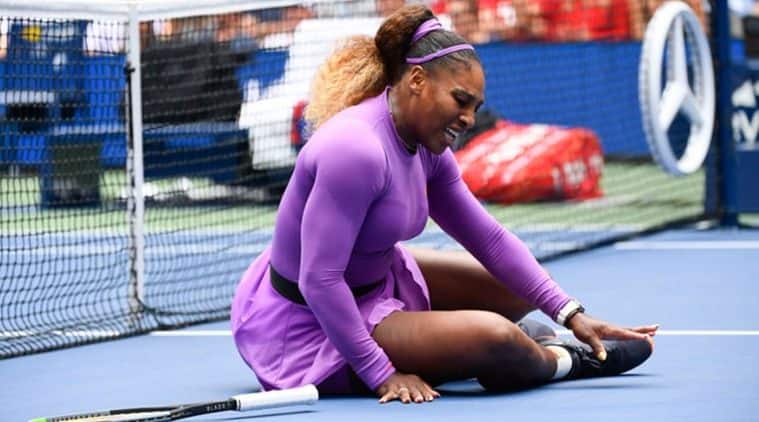 Serena Williams needed a medical time out in the second set of her 6-3 6-4 win over Petra Martic on Sunday. (Source: USA TODAY Sports)

Serena Williams needed a medical time out in the second set of her 6-3 6-4 win over Petra Martic on Sunday to get treatment on her right ankle but recovered to advance to the US Open quarter-finals.

Williams fell to the court at 2-2 in the second set after charging to the net to hit a volley that sailed long. The 37-year-old American eighth seed got treatment on her ankle during the changeover and appeared to be fine, smacking 38 winners on a sunny day at Arthur Ashe Stadium court.

Williams blasted her fourth ace on match point to see off 28-year-old Croatian Martic and reach the last eight, where she will face Wang Qiang of China for the first time.

Williams, who twisted her left ankle during a quarter-final loss at the Australian Open, said she did not think the latest injury serious but added it was too soon to tell.

“I usually know if it’s horrible early on. I mean, I had a really bad ankle sprain in January. I was like, instantly, ‘No, this can’t happen. I’m finally healthy,’” Williams said after the match. “But I’ll see tomorrow. So far I’m good. I have been managing it. We’ll see tomorrow.”

Svitolina serves her way past Keys into quarter-finals

Ukrainian fifth seed Elina Svitolina delivered a solid serving performance to beat American Madison Keys 7-5 6-4 on Sunday and secure a spot in the US Open quarter-finals.

With Keys, who finished runner-up in 2017, struggling with her backhand, Svitolina won 92 percent of her first serve points and did not face a single break point during the 75-minute clash under the Arthur Ashe Stadium lights.

“Very pleased that I could play very consistent tonight and in such a great atmosphere is very special,” said Svitolina, who capped the match in style when she served out to love.

With the win, Svitolina is the first Ukrainian woman to reach the US Open quarter-finals since Kateryna Bondarenko in 2009.

Up next for Svitolina will be Briton Johanna Konta, who upset Czech third seed Karolina Pliskova earlier on Sunday.