Shared News: November 15, 2020 10:57:24 pm
Soumitra Chatterjee, the legendary Indian actor with more than 200 movies to his name. (Express Archive)
Soumitra Chatterjee and Satyajit Ray worked in 14 films together, spanning over three decades. Some of Chatterjee’s best works were crafted by Ray, one of the world’s most iconic and influential Indian directors whose films garnered critical acclaim and won multiple awards worldwide, putting India on the global cinema map.

But did you know that he once played a rival to Ray on the cricket pitch?

“Soumitra Chatterjee was heavily into cricket. He, my father Dileep Mukherjee, and Soumendu Roy (cinematographer who worked with Satyajit Ray) lived close to each other and were into sports. They would meet every other day and played the game often. Not only cricket but badminton, football… they were all into sports and watching them play was amazing to watch,” recalled former Bengal allrounder Joydeep Mukherjee.
https://twitter.com/joydeepfive/status/1327975782820429824?ref_src=twsrc%5Etfw%7Ctwcamp%5Etweetembed%7Ctwterm%5E1327975782820429824%7Ctwgr%5E&ref_url=https%3A%2F%2Findianexpress.com%2Farticle%2Fsports%2Fsport-others%2Fsoumitra-chatterjee-tribute-satyajit-ray-cricket-eden-gardens-7052504%2F
In an Express Archive photo from the 70s, it can be seen that before a charity match, a march past was underway – among others Master Babloo (holding aloft the flag), Satyajit Ray leading Hemanta Kumar’s XI, and Jahar Ganguly leading Kanan Devi’s XI. 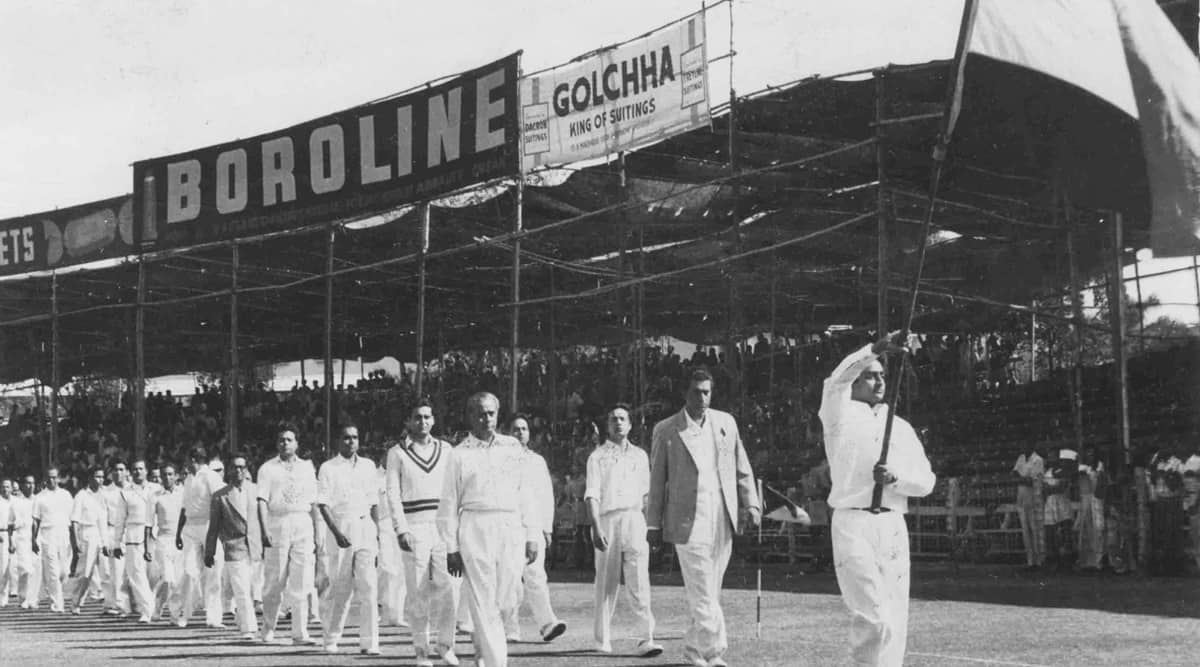 This was not one-off.

In one of the most talked-about charity matches (for the Kerala floods) from the late ’70s between the Kolkata Film Industry and Mumbai film Industry at Eden Gardens, Chatterjee was an important member from the Bengal side.

“The Mumbai team comprised the likes of Amitabh Bachchan, Vinod Khanna. There were 100,000 people on the ground. Chatterjee, was an important member of the dressing room, strategizing how to play and what field formations to set,” said Mukherjee, currently the Director of Cricket, Cricket Association of Bengal (CAB).

How many names can you name ? pic.twitter.com/xFu33ymD6Q

“He was one of the trusted personnel of the team. He batted well and was good with ball as well. As a child I have one memory of him being focussed and taking decisions of who will be the new ball bowler based on which side the breeze was blowing,” Mukherjee added.

Chatterjee never missed an international cricket match at the Eden Gardens till the 1980s.

Former Bengal captain and national selector Sambaran Banerjee spoke about Chatterjee’s love for the game and said he was a cricket fan who kept a tab on all the developments related to the game.

“He loved Test cricket more than anything else. He had told me that he never missed a cricket match at Eden Gardens in the ’60s, ’70s, and ’80s,” Banerjee told PTI.

Later in his life, in an interview on the official social media channel of the Indian Premier League (IPL) franchise Kolkata Knight Riders (KKR), Chatterjee had confessed his love for cricket and said, “At one time long back, I used to be an avid fan of cricket. Even now when some cricket is going back in some parts of the globe I generally follow the news.”

Chatterjee, the legendary Indian actor with more than 200 movies to his name, died Sunday of complications due to Covid-19. He was 85.

Board of Control for Cricket in India (BCCI) President Sourav Ganguly also mourned the death of the legendary actor. “U have done so much ..u can rest in peace,” Ganguly, also a former India captain, tweeted.

Before embarking on his film career in 1959, Chatterjee worked as an announcer at All India Radio in Kolkata. He was also an accomplished playwright and a poet.

In a 2016 interview, Chatterjee displayed his indomitable spirit to act even at an old age.