Steve Smith on Wednesday returned to the top in ICC Test Player Rankings, replacing Virat Kohli after India lost the first Test to New Zealand in Wellington by 10 wickets.

Kohli posted a total of 21 runs in his two innings as New Zealand took 1-0 lead in the two-match Test series. The Indian skipper lost his No. 1 spot after managing to score 2 and 19 in the Wellington Test. Kohli, who has not scored a century in the last 20 innings, now has 906 points at the second spot, while Smith stands at the top spot with 911 points.

Kohli is followed by New Zealand skipper Kane Williamson at 853 points, having gained 31 points after his innings of 89. The last batsman apart from Smith and Kohli to be No. 1 is New Zealand’s Kane Williamson, for an eight-day period in December 2015.

Meanwhile, Mayank Agarwal is back at a career-best 10th position with his highest aggregate points tally.

The only Indian to make it to ICC top Test Ranking Bowler is Ravichandran Ashwin at the ninth spot with 765 points in the list lead by Australia’s Pat Cummins at the top with 904 points. Ashwin is also at the No. 5 spot in Test all-rounder’s rankings, with Ravindra Jadeja at no.3 spot. 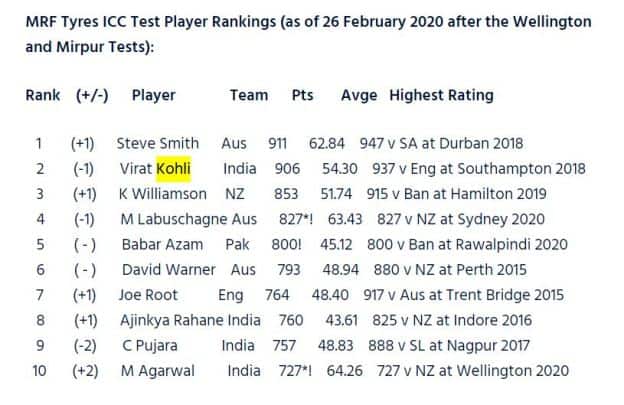 In the ICC World Test Championship, New Zealand are on 120 points after gaining 60 points for the Wellington victory.