Shared News| Updated: June 27, 2019 10:36:21 am
Ayaz bhai, I will play for Pakistan” Shaheen Afridi was 15 when he shared his destination with Ayaz Akbar Yousafzai, the head coach at Pakistan’s age-group camps held for teenagers. “He said it matter-of-factly. Sometimes, kid say na, I want to play for Pakistan — this wasn’t like that. He wasn’t telling his wish. He was confident,” says Yousafzai. So was the coach himself. It was a U-15 camp when he saw him first, brought to him by an owner of the cricket club where Afridi was playing.

Yousafzai knew Afridi’s brother Riaz, who had played for Pakistan. He had been the bridge for Riaz as well, from youth cricket to first-class. But he would be a bit surprised one day when Riaz walked up to him and told him to allow his younger brother to play first-class cricket for Khan Laboratories.

“He is too young for first-class, I thought,” Yousafzai tells The Media. “But the team asked me and then Riaz came and kept asking him until I agreed. Unka Waalid saab, also I knew and then I decided chalo, let him play.” Afridi took eight wickets in that match. “Then what? ho gaya kaam!” Yousafzai says. He went to play for Pakistan U-19 but by then, he was already touted as next big thing.

Pak passion is a great site for most things cricket but obviously for Pakistan. Devoted cricket fans obsess over every little thing—technical, mental, body language and it comes out in raves, disses, and genuine appreciation. But above all, the first thing whenever the forum discusses a new fast bowler is his speed. Shaheen Afridi Pace Watch is a recurring thread of sorts. Videos are somehow procured. There you can see Afridi as a 17-year old, him knocking out stumps and yorking batsmen.

Even bowling from round the stumps, which in a previous era used to be considered as hard work, something that requires years of practice. The forum obviously lists out his speeds across ages. 145 kmph., 147… someone would fret that the run-up isn’t smooth or that he isn’t coming closer to stumps. You put those ‘problems’ to Yousafzai and he laughs. “You know what, we did work a lot on the run-up. He had almost everything else. A true natural. Inswing, outswing, hitting the deck, swinging it, he had it. Thak jaata tha with his run-up (he would get tired). Tall boy and the strides and the way he would run in are important. For any bowler, but for someone tall, it becomes that more crucial – and can upset rhythm if it’s too long or too short a stride. We would work on it. And another thing was the line and length, but that was obvious as he was young and was learning the tricks of the trade.” 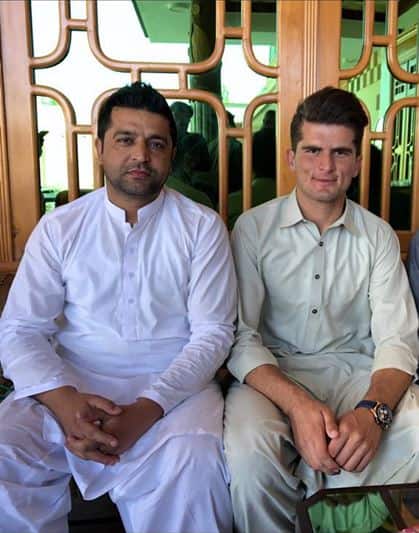 “Shaheen, kabhi toh has ley tu!” (Laugh sometimes!) Yousafzai would tell Afridi, a serious, focused kid, almost always talking about bowling or fussing about his run-up or whatever that they were working on. “His work ethics stood out, bahut hi mehnati bacha hai. Not many are like that, especially the ones who are naturally talented like him. They think the game comes easily but not Shaheen.”

Once, when a PCB official landed up at the camp and asked Yousafzai whether there were any problems, he went, “Bus, Shaheen late aata hai” and he laughed. To him and to the official, it was clear that it was a joke. By then the word had spread about Afridi’s discipline. “But he took it seriously, had a long face, mooh latkake baita, and refused to speak to me for a while.” I told him, beta voh toh joke tha but he felt I shouldn’t have. It took him a while to get over it.”

On Wednesday, Shaheen smiled. He even air-kissed. Three wickets in a bunch. So much so that at the end of six overs, many team-mates ran to congratulate him and pat him on the back. It seemed the end of his spell.

He was walking away with a smile when his captain Sarfaraz summoned him. Both had a chat, Afridi nodding away and it was clear that he would bowl one more over. No wickets came, but it made Yousafzai smile at his Islamabad home. “Even as a kid he was always ready to bowl long spells and it was one of the reasons I was worried about his early first-class debut. Kahin, they won’t break his body with such spells.”

He had reason to be worried. Not that Afridi was prone to injury but he wasn’t this well-built as he is now. “Patla tha, slim boy. The experts advised him on dieting and how to build his body. He immersed himself with all that – ghus hi gaya.” Seven overs, 11 runs, three wickets. Of the three, Yousafzai enjoyed the Colin Munro’s wicket. “Munro is an attacking batsman but he didn’t worry about it. It was on a good length and moved away. Kind of stuff, I remember we used to talk and work on when he was younger.” Well, he is still 19.

“What makes Shaheen special is that he is flexible – shoulders, hands, and the wrist,” Yousafzai says. It’s an interesting observation and it explains a lot about his bowling. At times, he can look like a hit-the-deck bowler. That’s the shoulder taking on the main role. Rarely do left-arm fast bowlers are effective hit-the-deckers. Brett Shultz was one but he didn’t last long. Usually, the lefties are more slingy, swingy, curlers. Afridi can, if he desires, operate as an effective hit-the-deck er. Like he was against Australia (though not a wise option then). Like he was here against New Zealand in phases.

The flexible wrists come into view when he got the ball to bend away. It almost flexes at the last instant, as if he is doing it slow motion, a separate piece of his arm – the wrists take over at the last instant and he gives it a quite fierce whip. The wrist snaps and the ball swings. “It’s that flexibility I am talking about,” Yousufzai says. New Zealand didn’t have many answers to that fluidity, that flexibility and they succumbed. Ross Taylor couldn’t even be blamed, he had leaned forward in defense, drawn forward by the length but the ball jagged away to clip the edge.

Already, Pakistan Twitter is ablaze with memes. The big jaw, the big forehead, and that hair, parted in the centre and buffed up on top make for easy gifs and jokes. The pace threads in fan forums will be flooding for a while. But, now, time has come to appreciate and rave about the other things he does: the way the ball fizzes, the way it seams, the lengths at which it kicks off, and those flexible wrists and shoulders that make him a unique left-arm pacer of our times: someone who can hit the deck and also swing the ball. Double jeopardy for the batsmen.