Concrete was the ground beneath Shubman Gill’s cricketing feet in his formative years. It cemented his batting technique, made him what he is. It will present him with a few challenges in the near future, but has already given him the soundtrack of his childhood: Thwack, thwack; he is intimate with the sound of ball bouncing off it.

Rarely has an Indian batsman shown such preference for backfoot play. There have been exceptions but for most, it comes at a later stage of their evolution, often forced by necessity. Not with Gill. It’s not an exaggerated back-and-across movement like some Australians of the past, but he likes to retreat, build a strong base, and react from there. He isn’t someone one would see leaning into his drives too often. Instead, it’s the balance and in particular, the arm-extension he trusts, to punch even full-length deliveries on the up.

It’s tempting to mix this back-foot preference with bouncy and relatively non-seaming tracks of Australia, and conclude that Gill is going to be an unqualified success. It will suit his game but there are a few riders.

The backfoot play was one of the first things noticed by Kolkata Knight Riders’ assistant coach and former Mumbai player Abhishek Nayar, who has forged a close bond with Gill over the last three years with time spent at the KKR academy and then at IPLs.

“When the KKR academy started, his father came to Mumbai for four days and I wanted to understand what went into the making of Gill the batsman. Where is this backfoot mastery coming from?”

To understand it, we have to fade out to 17 years ago to village Chak Kherewala in Punjab’s Fazilka district.

Gill is four, the sun has barely broken out when he stirs, picks up his bat that is carved off a peepal tree and hence light on his unwrinkled hands, and goes to the verandah (“three pitches ka size”, he recalls). The father, a landlord who had already seen the son’s love for cricket a year ago, hurls the ball and Gill thwacks it. The father hurls a little quicker, Gill starts to press back and hits it.

He is eight, it’s 3.30 am in Chandigarh where the family has moved for his cricket to flourish, and Gill would bat for two hours before school. More cricket in the afternoon, on concrete. The technique solidified a bit more.

“What I understood from his father was that he batted a lot on concrete, he liked fast bowers and he got a cousin who fired really fast throws at him for a decade now,” Nayar says. It’s the powerful shoulders of his elder cousin Kushpreet that has moulded Gill’s technique. For hours, day after day, Kushpreet hurled the ball at rapid pace at Gill, who found a way to tackle the challenge. Press back. Retreat. Build a strong base. And then punch. “He can throw really fast and from 8 to 16, he helped me a lot in my training. Without him, I couldn’t have reached this stage,” Shubman says. Without him, perhaps, the backfoot play too wouldn’t have solidified to the extent it has. 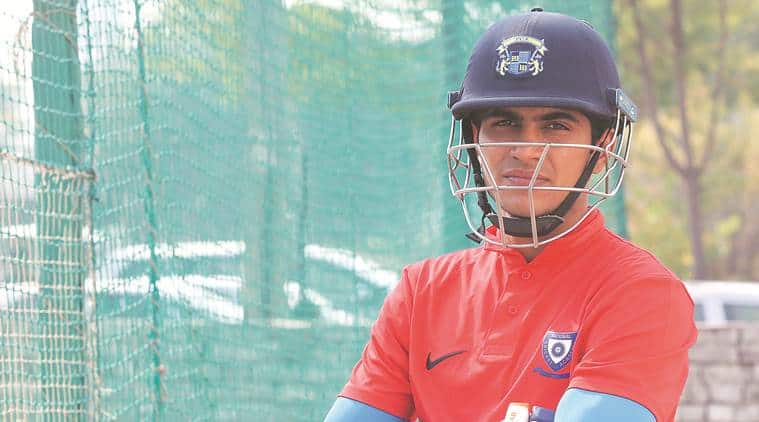 “On concrete, the backfoot becomes natural, an instinctive shot. And the front foot becomes something you have to develop,” Nayar says. “He isn’t someone who you will see leaning into drives as that is not something that comes naturally, but he has scored a lot of runs with the red ball on the front foot. I think he has an all-round game.”

What are the likely challenges?

Batting is about transferring weight and being still when playing a shot. At the top level one needs to be strong on the back foot but still have the balance and skill to play under the eyes, and be in a position to transfer the weight forward.

Gill’s first move is to step back, then the front foot side-steps to his right and often opens up a little, before he presses down into his stance, crouches a little – for balance, ready to spring out to action according to the demands of the ball. But here is where it gets interesting.

Even when the ball is relatively full, he doesn’t move forward that much. Sometimes, one gets the impression he could transfer the weight further when he goes forward. It raises the concern that he can occasionally push his hands at the ball without actually transferring his weight forward.

The Australians would know this, and it would be interesting to see the lengths they attempt, if the youngster makes his Test debut on the tour. Would they keep it short of length and surprise him with a fuller one now and then, or go the other way? It will come down to how judiciously they mix it up but in theory, Gill’s game should make his chances of success in Australia higher. It’s the moving ball in England or New Zealand where he would be tested more – and it would come down to his problem-solving skills and temperament.

That’s one area that Nayar knows Gill is up to the task. “He has a great deal of understanding about his own game and about the complexities of his skill sets. Lot of cricketers spend a lot of time trying to understand their games. He is someone who has that deep understanding at a young age. He is someone who relies very highly on his technique. And he wants to make sure that is always spot on, at a level where he wants it to be as it gives him confidence. He has practised for hours and hours every day and is really aware of his game.”

With most young batsmen, it is temperament and attitude that mentors and coaches fret about. “Shubman isn’t someone who you tinker too much with, he is switched on all the time,” Nayar says. “He is not someone who requires advice around mental aspects; he needs and looks for guidance around his skill.” Jacques Kallis, who was KKR’s coach last year, agrees. “There is no shot or option he (Gill) does not have as a batsman but his decision-making and ability to think clearly under pressure is equally impressive,” Kallis wrote in a column in The Times of India. “He has a bright future with a mature head on his shoulders.”

“He is aware that he is good,” Nayar says, “And that comes from confidence and hard work. Shubman is someone who is humble even with the potential he has. People have been talking him up for so long now but he knows the game is bigger than him. Lot of people have talent and are aware of it, but they take it for granted. Not him. He works his back off to make sure the god-gifted talent is utilised.”

There is just one thing that Nayar is waiting to watch in Australia. “I would like to see how he handles international-match pressure. Knowing him, he will crack it. He just needs that one good knock that will kickstart his career. Such players come few and far between – this kind of talent who also have excellent demeanour and work ethic.”

Afghanistan fight back after Dhawan’s fireworks