World Cup 2019: In a matter of 71 balls, Morgan obliterated the tally, pummelling 17 on the day, one off almost every four balls. He didn’t spare the dangerous Rashid Khan either, caning him for 58 runs off 20 balls.

When Eoin Morgan strode out to bat, the leading six-hitter in the tournament was Aaron Finch who had struck 14 from 310 balls. In a matter of 71 balls, Morgan obliterated the tally, pummelling 17 on the day, one off almost every four balls. He didn’t spare the dangerous Rashid Khan either, caning him for 58 runs off 20 balls.

Straight or legside: Just 21 of Morgan’s 148 runs were fetched between third-man and extra-cover, which’s uncommon for most left-handers, more so for Morgan, with his deep crouching, low stance and penchant for horizontal-bat strokes. Not that he ignores the off-side, but he prefers the leg-side, rather like most right-handed batsmen from the subcontinent. Anything on or just outside off-stump, he bludgeons straight down the ground, accentuated by the strong bottom hand. Most of his hits are flat and meaty, thudding into the sight-screen. The bowler naturally attempts to compensate by bowling on middle or middle-and-off, thus catering to his forte, the leg-side. As many as 59 per cent of Morgan’s runs came through the leg-side, including 12 off his 17 sixes, specifically between long-off and square-leg. The key to his leg-side proficiency is his top hand, which’s quite loose, enabling him to get the perfect placement. Initially, in his career, Morgan had a predilection for scoops and paddle sweeps, but he has limited those as he was getting out too often resorting to those strokes. Against Afghanistan, he unfurled the reverse sweep just once, to dishevel Mohammad Nabi’s length. After all, why be cheeky when you have the power? 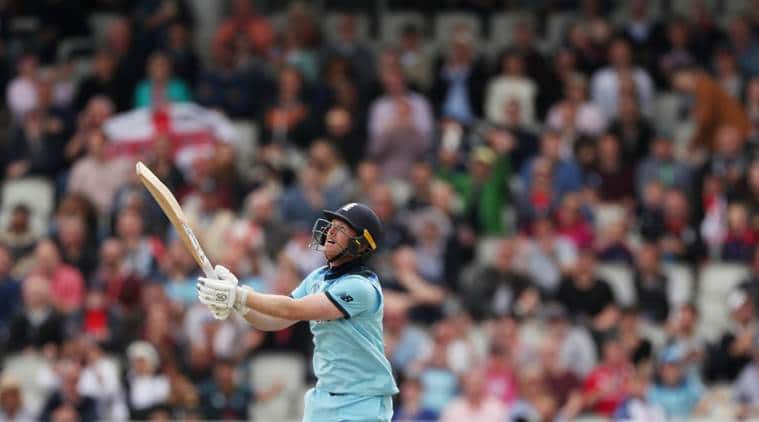 England captain Eoin Morgan hits a maximum against Afghanistan during their match at Old Trafford on Tuesday. Morgan made 148 off 57 balls. 102 off those came off 17 balls. (Reuters)

Mastery of length: It’s the lateral movement and side-spin that pose questions to his technique. The Afghanistan bowlers had neither, even Rashid relies more on top-spin. Their pacers were at best medium pace. So Morgan could just pick the length and pick up the boundaries. Several times, he just cleared the front leg and smoked Gulbadin Naib over mid-wicket, one of his favourite shots. He was gifted several long-hops, but also made them bowl short by shimmying down the ground and hefting them over the rope. Such was his proficiency that even back-of-length deliveries were ruthlessly pulled. To the spinners, especially Mujeeb-ur-Rehman, Morgan employed the slog-sweep to great effect. The low, almost ground-hugging stance is a blessing as he can get under the ball adroitly and achieve consummate control over his shot. The mastery of length, or the ability to adjust to different lengths, stems from his revamped stance. Revamped stance: Initially, Morgan had a pronounced back-and-across shuffle, which often resulted in his head wavering too much and the eyes flickering across. But a few years ago, he eschewed the shuffle altogether. Rather, he would nominally move forward, which has resulted in a still head and more balance at the crease, thus naturally reducing his vulnerability to lbws. Moreover, he has trimmed his back-lift, which had in the past tied him up in knots, with the bat having to come around the front pad.

Sweeping Rashid aside: The leggie is a dangerous proposition but Morgan conceived the perfect template to counter him, deploying the sweep to exemplary perfection. Over-spin-reliant leggies would naturally fancy their chances against the slog, hoping their extra bounce could fool them. Rashid did fool Morgan into top-edging when he was on 28, but the dropped catch deflated him, and Morgan kept rattling out the sweeps and slogs, shellacking as many as four sixes between square-leg and deep-midwicket. Often, the key in neutering Rashid is picking his googlies. Morgan deciphered them as astutely as anybody who had dominated him, forcing the leg-spinner to lose control over his length. Fearing the sweep, he began bowling shorter, and Morgan tuck in gleefully. And once Afghanistan’s spearhead was dismembered, they fell apart.