Playing his first match of the tournament, the pacer takes a hat-trick in the final over to deny Afghanistan in a nail-biter at Southampton.

Mohammad Nabi gave a royal scare to the Indians, dragging the game to the last over, raising hopes of a nation where cricket was born out of conflict and exodus, but just about falling short in the end. The Afghan cricket story is well-documented, but that shouldn’t dull our senses to the passion and the danger.

Here is a story about their passion. Once in Jalalabad kids swam through a flooded path to get to a hall for a cricket function. The national team was there that day in 2009 for a kids’ camp, but the best part was that most of the children didn’t even know that. Still, 150 of them waded through water because they were told that there would be something special related to cricket.

The soundtrack to this joyous childhood is explosions. Last September, at a match during Ramadan in eastern Nangarhar province, Taliban set off three bombs in succession, killing three spectators. “Sometimes you hear a boom of the bomb blast going somewhere nearby when you are coaching the middle,” said Andy Moles, who coached them for the last world cup. “Like coaching in a war movie.”

Saturday at Southampton felt like a feel-good underdog movie. Almost.

First, they tied up the Indians with their spinners on a sluggish pitch. India, as is their wont, refused to try anything different. Bat normally for the first few overs, see where it takes them. But what was normal when Mujibur Rehman carrom-balled Rohit Sharma’s offstump? Or Rashid Khan twisted his elbows and wrists to get one ball after another where he wanted them to land? Indians just kept patting them — pushing, nurdling, tapping, hoping for a release. But the most ‘normal’ offspinner in world cricket, Nabi, doesn’t know what freebies mean. He does what he does with minimum fuss and maximum effect.

That India were shaken came through in two moments involving MS Dhoni. First with the bat, after dragging on at a leisurely pace, as he does, he suddenly realised that 250 was some distance away unless he took some risk. The kind of risk he doesn’t take normally. Trying to hit Rashid Khan in his 9th over – he would have normally seen him out. Getting stumped – rarely does he launch himself into a shot against a spinner without the option of returning to safety. 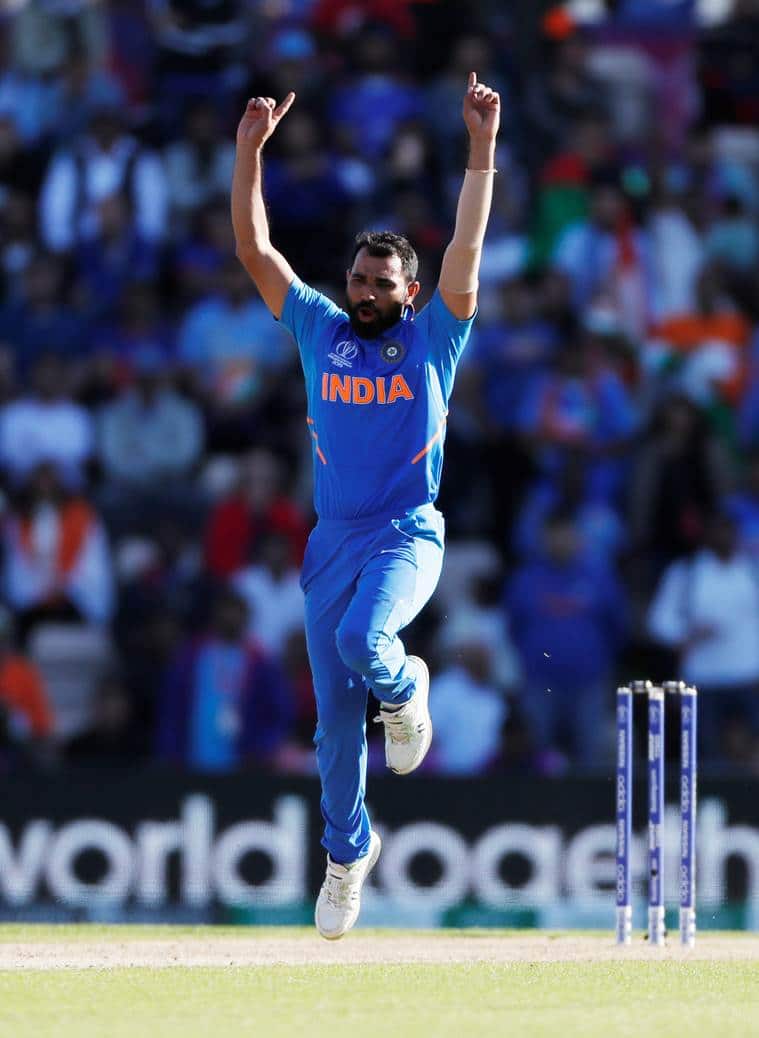 Shami had a ball cut into a left-hander Hazratullah Zazai and it would have hit the leg stump – but considering the ball moved in from leg to off, and it was hitting the leg stump, it was highly unlikely that it would have pitched in line of the stumps. (Reuters)

The second moment came early in the chase. So early that it said something about the Indian nerves. Mohammad Shami had a ball cut into a left-hander Hazratullah Zazai and it would have hit the leg stump – but considering the ball moved in from leg to off, and it was hitting the leg stump, it was highly unlikely that it would have pitched in line of the stumps. Shami was interested, Kohli was but what stood out was that even Dhoni who ran in to join the crime scene couldn’t persuade them (assuming he wanted to in first place) to not go for it. Review wasted. Understandable of course considering they just had 214 to defend but it also showed that they were a bit desperate. Afghanistan would have taken heart from that.

Nearly everybody did their bit in the chase. Everyone got starts, pushed the ball around, threw the pressure back at India to check if one of the favourites at the World Cup cracked.

And they would have, had it not been for Jasprit Bumrah. The score read 106 for 2, a partnership of 42 runs between Hashmatullah Shahidi (who was hit on the helmet in the last game but jumped up from the ground because he didn’t want his “mother, watching back home, to get worried”) and Rahmat Shah.

Bumrah broke their back in the 29th over with a double strike. A bouncer that snarled at Shah’s head and the top-edge was snaffled by Yuzvendra Chahal at fine-leg. Then, he took out Shahidi with a one that jumped up, the leading edge spooning the ball back to him. 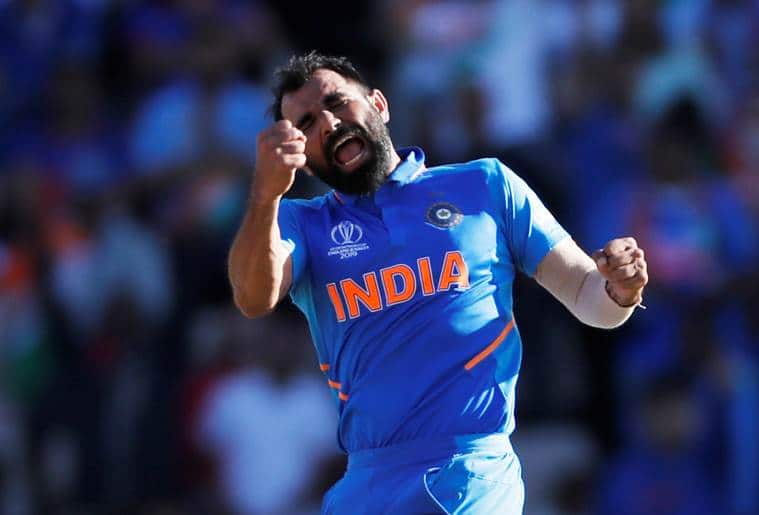 Mohammed Shami stepped up, giving away just 3 overs in the 48th as he kept peppering the 18-year old Ikram Ali Khil with short stuff. (Reuters)

The Afghan back was broken but the bravehearts kept ticking on. Najibullah with a fine cameo, letting Nabi hold his end and taking on the risks, and once he fell, unexpectedly to Hardik Pandya, Rashid Khan took over the baton. The same plan: Nabi to stay, Rashid to hit.

The chase quickened, the target seemed close when Chahal produced a gorgeous leg-break — it dipped and turned, sucked Rashid out of the crease and even as he was stumbling to hold his balance, Dhoni had done his thing.

Nabi pressed on. A nonchalant six against Bumrah in the 47th over. As if he was some club-level bowler. He swivelled to crash-pull a short delivery on to the Indians sitting beyond midwicket boundary. Silence there, but Kabul must have erupted.

Mohammed Shami stepped up, giving away just 3 overs in the 48th as he kept peppering the 18-year old Ikram Ali Khil with short stuff. 21 off 12 now. Bumrah wasn’t likely to repeat his errors from previous overs, would he? It seemed Dhoni wanted third man, but Bumrah waved his hand and asked mid-off to drop back to long-off. Dhoni then carefully adjusted the short third man and backward point fielders to the spots where he wanted them. It was clear that Dhoni was worried that Nabi might try slicing, steering, and squeezing the yorkers through that region. But Bumrah wanted cover at the straight boundary. Both won in the end, Nabi’s attempted steers couldn’t pierce the field and it came down to 16 from the last over. 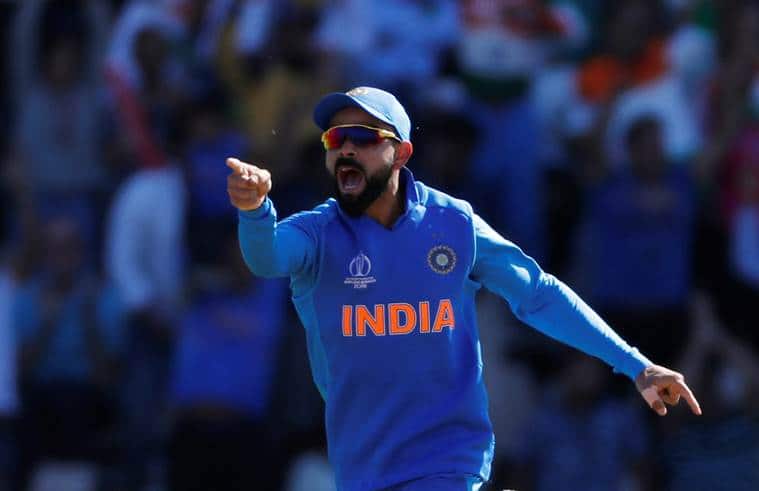 There was an attempted yorker from Shami but Nabi was ready, deep inside the crease and he slugged it to long-on boundary. A dot ball later, he went for it again. And initially, it seemed he had connected it, but he couldn’t clear the long-on fielder. And Shami had the stumps cartwheeling off the next two deliveries to effect India’s second hat-trick in a World Cup game, and 10th overall. India won, but so did Afghanistan.

Sri Lanka kick off Asia Cup with rout of Bangladesh

‘Don’t reverse sweep up into your own face’: James Neesham after injuring himself against India A