Shah said India has become only the third country in the world, after the United States and Israel, to avenge attacks on its armed forces.

“After the Uri attack, the army did a surgical strike. After the Pulwama attack, people said there could not be a surgical strike due to the high level of alertness. But on the 13th day, the Narendra Modi government carried out an airstrike, and more than 250 terrorists were killed without suffering any losses,” Shah said.

Speaking at an event here, he said: “When (Wing Commander) Abhinandan Varthaman was caught, they (Opposition) started again. But the Narendra Modi government’s impact was such that for the first time in the world, a PoW was released in such a short time… Abhinandan was released within 48 hours.”

Shah said India has become only the third country in the world, after the United States and Israel, to avenge attacks on its armed forces.

Addressing another event in Surat, Shah said the Opposition had brought a “smile” to Pakistan’s face by questioning the airstrike. “Mamata says where is the evidence; Rahul says it is being politicised; Akhilesh says it should be investigated. I have to say shame on them. Your statements have brought a smile to Pakistan’s face… If you can’t stand in support of Modi and the armed forces, then at least learn to keep quiet,” he said.

“When the Indian Air Force laid out the facts at a press conference… if we don’t believe that, then, as a citizen of this country, we should be ashamed. Those who are asking for proof are helping Pakistan and strengthening its intentions,” he said in Ahmedabad. 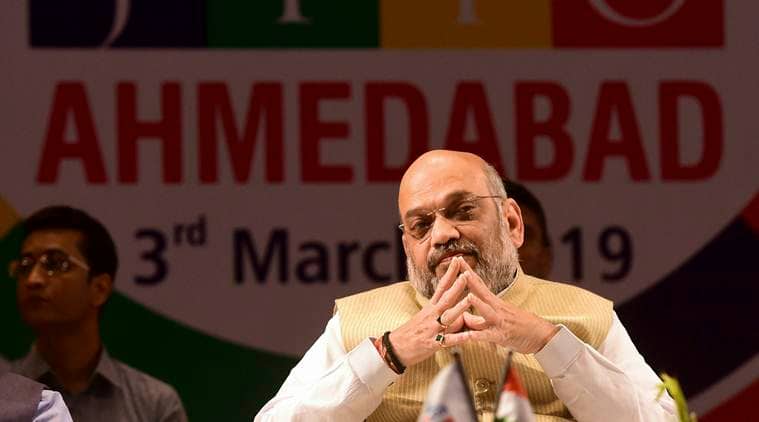 Shah said India has become only the third country in the world, after the United States and Israel, to avenge attacks on its armed forces (PTI Photo: Santosh Hirlekar)
“Even we were in the Opposition. Then too, there were national security issues, but we stood behind the government. Why should you stoop so low in politics that you question the Indian defence forces? Come and fight us in the poll battle… But you raise doubts among people regarding matters of national security… We cannot stoop so low,” he said.

“They (Opposition) have set an agenda for the elections — gathbandhan ki sarkar — but who will be the leader, what is their ideology, policies, programmes? Elections are not held in the country because somebody is old enough to be the Prime Minister, but to decide who will take the country’s economy forward… who will give a befitting reply to Pakistan, have the courage to take revenge…,” he said.

Tracking BJP through the journey of Atal Bihari Vajpayee