Shared News:Patna |Updated: March 4, 2019 8:09:23 am
Raising the poll pitch, Prime Minister Narendra Modi on Sunday accused the Opposition of demoralising the armed forces by “raising doubts” and “asking for proof” of the Balakot airstrike. Saying this was a “new India” with a new policy, he said: “Yeh India chun chun ke sab hisab leta hai (This India settles all scores).”

Addressing an NDA rally here, with allies Chief Minister Nitish Kumar and Union Minister Ram Vilas Paswan sharing the dais, the Prime Minister said the Congress and its allies were trying to“finish Modi”, while he wanted to “finish terrorism, poverty and malnutrition”. This was Modi’s first political rally with Nitish.

Setting the tone for his speech, Modi began by asking the crowd to shout “Bharat Mata ki Jai” for “Paraakramee Bharat”, “Vijayee Bharat” and “veer jawans”. “While we are out to counter terrorism across the border, what are some people inside the country doing? Humari sena ki hausala ko buland karne ke bajaay, woh aisee baaten kar rahe hai jissse dushmanon ke chehre khil rahe hai. Pakistan TV par unki baaten, unki tasveeren dikhakar, Pakistan mein taaliyan baj rahi hai (Instead of boosting the morale of our forces, they are speaking in a language which is lighting up the faces of our enemies. Pakistan TV is airing their statements and faces, and people in Pakistan are applauding them),” he said. Talking about India’s participation at the recent OIC meet, he said his government had taken a strong stand against terrorism. “There have been governments of Congress or Congress and its allies in the past. Why was India not able to register its voice at such an international forum for 50 years,” he said.

Referring to the recent visit of Saudi Crown Prince Mohammed bin Salman, Modi said, “I told him that India has a burgeoning middle-class and requested increase in the Haj quota of the country. As a result, the quota has been increased to two lakh people. Such an increase has been made only in the case of India”.

The PM said he also took up with the crown prince the issue of Indians in prison in Saudi Arabia for minor offences. “He sought a little time, and later in the evening, at a dinner at Rashtrapati Bhavan, he asked me to eat sweets. I wondered why? He replied ‘we have decided to release 850 Indians from jails’.”

“My government is taking care of the concerns of every section of society,” said Modi. 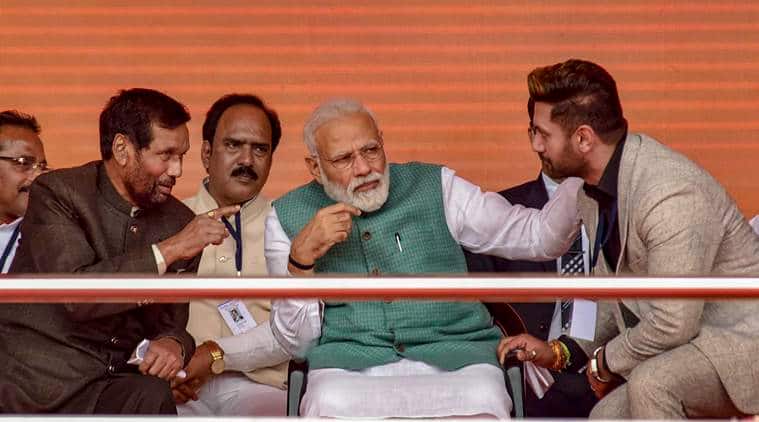 While he did not name Congress chief Rahul Gandhi, Modi said: “Those who run their political shops in the name of the poor and care for nothing except their dynasties are having problems with the chowkidar. But the chowkidar is alert and on the job.”

He also took a dig at jailed RJD supremo Lalu Prasad. “The people of Bihar have seen a lot in the name of purchase of fodder. Our government has worked for doing away with middlemen who siphon off public money. My heartiest congratulations to Nitish Kumar and (Deputy CM) Sushil Kumar Modi for pulling Bihar out of the dark times.”

Listing the Centre’s schemes and projects, he said they were in line with realising his dream of “bachchon ki padhai, jawanon ki kamai, logon ki dawai, aur kisanon ko sinchaee (education for children, income for youth, medicine for people, and irrigation for farmers)”.

He praised Nitish for carrying out development projects and working towards bringing electricity to every household in the state.

In his speech, Nitish praised Modi’s “leadership” and congratulated him for taking firm action after the Pulwama terror attack. Listing his government’s achievements, he said Bihar would be Open Defecation Free (ODF) by October 2 this year.

“Modiji will become PM again… After India’s recent response to Pakistan, I would say that his chest is not 56 inches wide, but 156 inches,” said Paswan.