Virat Kohli continues to lead the ICC Test Rankings for Batsmen but his lead at the top has been reduced by New Zealand’s Kane Williamson.

Cheteshwar Pujara was dismissed for 123 after scoring his 16th Test century. (Source: AP)

Cheteshwar Pujara’s knock of 123 and 71 runs in the first Test against Australia has taken him to fourth spot in the latest ICC Test Rankings for batsmen. The No. 3 batsman Pujara has now moved ahead of England’s Joe Root and Australia’s suspended David Warner. He trails third-ranked Australia’s Steve Smith by 55 points, and leads Root by 39 points. Virat Kohli continues to lead the charts but his lead at the top has been reduced by New Zealand’s Kane Williamson.

Williamson has become the first New Zealand batsman and 32nd overall to break the 900-point barrier in the ICC Player Rankings for Test Batsmen following a superb show in the third Test against Pakistan in Abu Dhabi, which helped the Kiwis win their first away series in 49 years. Williamson’s match saving second innings and knocks of 89 and 139 last week, set up New Zealand’s convincing 123-run victory over Pakistan.

Richard Hadlee is the only other New Zealand player – with bat or ball – to reach the 900-point mark in the ICC Test rankings. He reached 909 points with the ball in 1985.

The performance not only helped Williamson to win the Man of the Match award, but also earn 37 points in the latest player rankings, which, in turn, helped him leapfrog Smith into second position on a career-high 913 points. As a result, Kohli has conceded 15 points to slip to 920 points, just seven points away from Williamson.

With Williamson hot on Kohli’s heels, the India skipper needs to have a better show with the bat in the second Test starting December 14 in Perth. Barring which, Kohli could lose his number one ranking which he has been holding since the Edgbaston Test against England in August. Kohli could only muster three and 34 in the opening Test.

There was further good news for New Zealand, with Henry Nicholls breaking into top 10 for the first time. Nicholls scored an unbeaten 126 in the second innings for a 212 run stand with Williamson. For this performance, Nicholls has jumped from 17th to ninth.

Azhar Ali and Asad Shafiq, who scored centuries for Pakistan in the first innings, have made small gains. Azhar has moved two places to 10th, while Asad is now 21st after rising one place. 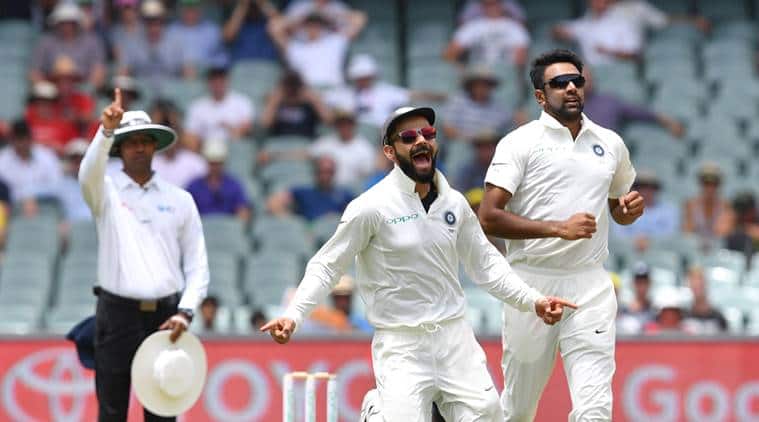 R Ashwin (right) was the pick of the Indian bowlers on Day 2 of first Test against Australia in Adelaide. (Source: Reuters)

With six wickets in India’s win over Australia, R Ashwin has moved one spot to sixth in the ICC Test Ranking for bowlers with Aussie quick Pat Cummins dropping to seventh.

There was another swap at No. 3 and No. 4 with Mohammad Abbas dropping to allow South Africa’s Vernon Philander to climb up. Kagiso Rabada continues to lead the charts.

Another Aussie seamer, Mitchell Starc has climbed two places to No. 16 after taking five wickets. Jasprit Bumrah rose five places to No. 33 thanks to his 6/115 figures.

From the Pakistan-New Zealand series, Ajaz Patel and Will Somerville made giant strides in the rankings. Somerville’s debut in the third Test and match-changing figures of 7/127 saw him enter the rankings at joint No. 63 with teammate Ish Sodhi. Meanwhile, Patel – who also made his debut in the series – accumulated 13 wickets to move up 11 places to No. 66.

Yasir Shah became the quickest to 200 Test wickets in the second Test and remains the highest ranked Pakistan bowler at No.9.

Ackermann 151* pushes Leicestershire to a position of strength

Carey lays out ambitions to become ‘best player of spin’

Afghanistan fight back after Dhawan’s fireworks