Wolves followed up their win over Chelsea with another at Newcastle. (Source: Reuters)
Ten-man Newcastle United were beaten 2-1 by Wolverhampton Wanderers in the Premier League on Sunday when Matt Doherty scored in the fifth minute of added time. The home side suffered from having United States international defender DeAndre Yedlin sent off for a professional foul with more than half an hour to play.

Manager Rafa Benitez was furious, apparently believing a covering defender was in position to prevent an attempt on goal. He also felt Newcastle should have had a penalty when their goalscorer Ayoze Perez was elbowed near the end.

Promoted Wolves, who had beaten Chelsea 2-1 on Wednesday after six games without a win, went ahead in the 17th minute with Diogo Jota’s second goal of the week.

Newcastle equalised six minutes later when Salomon Rondon, having crashed a free kick against the bar, crossed for Perez to score.

But Doherty’s last-gasp header after Newcastle keeper Martin Dubravka had saved Jota’s shot pushed Wolves into the top half of the table and left Benitez’s side 15th, three points above the bottom three.

“Scoring with almost the last kick of the game gives them no chance to get back into the game, so it’s pretty special that way,” Doherty said.

Wolves had two of their numerous Portuguese players to thank for the opening goal. Helder Costa spotted that Jota was unmarked and found him with a perfect cross to chest the ball down and score.

They had started well but soon came under pressure and conceded an equaliser.

Rondon deserved a goal with the fierce free kick that came back off the bar but he chased the ball down and crossed for Perez to glance in a clever header.

Newcastle were forced into a change at halftime with Spanish defender Javier Manquillo coming into the back three for the injured Federico Fernandez.

They suffered a huge blow with Yedlin’s red card, for a blatant pull on Jota’s shirt after he had gifted possession to the Wolves man, and were fortunate when substitute Raul Jimenez hit the underside of the bar.

Dubravka seemed to have preserved a point with a fine save from Doherty 10 minutes from time but right at the end he could only parry Jota’s shot and Doherty had an open goal to head into for his team’s second win in five days.

Perez, however, was adamant that he had been elbowed in the face by Willy Boly a few minutes earlier.

“The guy elbowed me really hard straight in my nose but the referee said it was the ball that hit me, even though I was bleeding,” he said. “I don’t know what we need to get a penalty.”

It was Wanderers’ first win in the top flight at Newcastle since 1959, when they last won the title. 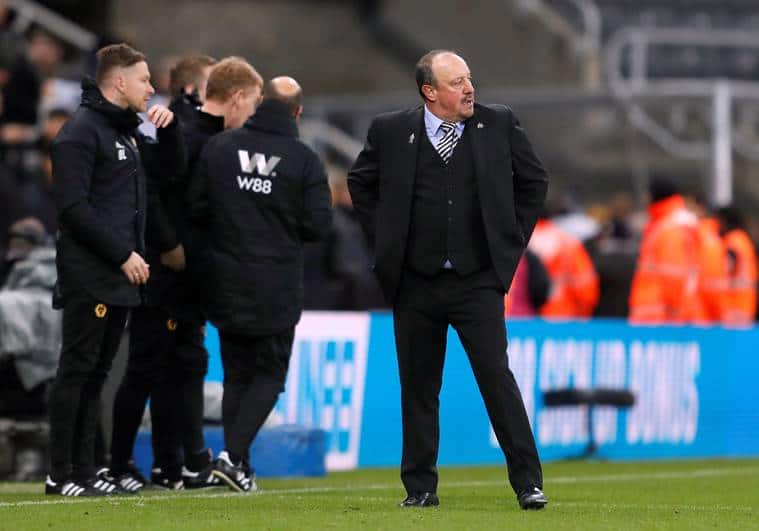 Benitez was furious with two refereeing decisions during the defeat on Sunday. Referee Mike Dean ignored an apparent elbow in the face suffered by Perez that could have been a penalty and a possible red card.

Earlier he sent off Yedlin for preventing a clear goalscoring opportunity but Benitez claimed that Jamaal Lascelles was close enough to have intercepted.
“It was key to the game, the red card and the elbow on Ayoze Perez,” Benitez told the BBC. “We need VAR right now. In this game it would have changed everything. How can you explain those decisions to our fans?”

Perez said that the referee told him it was the ball that him in the face.

As for the dismissal of Yedlin, Benitez was adamant that Lascelles was in a covering position as his American team mate pulled back Diogo Jota by the shirt. “He was close enough to get across,” the experienced Spaniard said. “You can guarantee to me that the player in the corner of the box can score in the top corner every time? It cannot be a red card. We have lost three points today and we deserved to win.”

Instead of moving to within one position of Wolves in mid-table, Newcastle had to watch their visitors shoot into the top 10, nine points ahead of them after a second win in five days following their defeat of Chelsea.

Manager Nuno Espirito Santo felt his team had been fortunate. “We didn’t do the best performance,” he said. “We didn’t win our duels or manage the possession of the ball. The red card changes the game. We were lucky to beat them in the end. A draw was clearly the right result.”

He dismissed the challenge by Willy Boly on Perez, however, as “a dispute of the ball”. “It was a tough game in the momentum where we are. Everyone thinks everything was solved after (beating) Chelsea but that’s not true.”

Heartfelt Messages: You Can Send To Your Loved Ones Happy Diwali

Who is responsible for Corona’s ‘conspiracy’? Sino-US are accusing each other