The Northern Districts cricket headquarters, located at the entrance of Seddon Park, is empty but for the bored receptionist, who is under the illusion that the venue is hosting another India-New Zealand T20I, and a billboard of Kane Williamson and Virat Kohli holding the trophy. The lights, strangely, are lit in almost every other room, despite a massive drive to reduce power consumption. The receptionist banters: “It’s to keep me awake.” And as an afterthought adds: “I think I need to switch on the floodlights to keep me awake.”

The ground, though, is basking under the blazing sun, the grass shining so brightly that the reflection almost burns the eyes. The closer one approaches the square, where the assistant curator is attending to the pitch, the grass gets thicker and brighter. There are four strips of various hues on the square. The one on the extreme right, on which was played the third T20, is patchy, brown blotches interspersed with thin grass. On its side is a moderately-green one, a grass carpet but not quite lush and seemingly used. The next is neatly wrapped under a tarpaulin sheet.

On the extreme left is a deck that’s so green that it’s indistinguishable from the rest of the ground, green carpets like the ones that were rolled out for India on the disastrous tour of 2003. Word has it that it could be the surface for the warm-up game between India and New Zealand A. But don’t be fooled by the colour, says recent match history on this ground. Seddon Park has recently been kinder to batsmen than it has ever been in its history.

The last game played here was a dull draw with the hitherto out-of-touch Joe Root scoring a double hundred. Tom Latham compiled one in the first innings, so did Kane Williamson and Ross Taylor in the second. The Bangladesh and West Indies games were one-sided, but one knows how implosive their batting units are. Speaking of being implosive, Pakistan lost nine wickets in the final session to lose a Test here in 2017. In between, there was a rain-affected draw against South Africa. Seddon Park, though it has been a largely result-producing ground, isn’t a nightmare for batsmen. In fact, it eases out as the game progresses — a reason the third/fourth innings have bred a lot of hundreds.

Don’t be fooled by the colour, says assistant curator Andrew James McMecking, too. He explains the rationale: “It’s generally very humid here, so we leave a lot more grass so that it does not break up, so that there is bounce and pace throughout the game. Also, we use the winter grass (rye grass). This dries out very fast so we struggle to keep the surface green. So we do what we can (to keep the grass as green as possible).” That the present summer has been the harshest could have been a factor.

He says: “We expect the ball to move around a bit.” That would be quite a transition for the Indian team from the limited-overs leg to the five-day format. 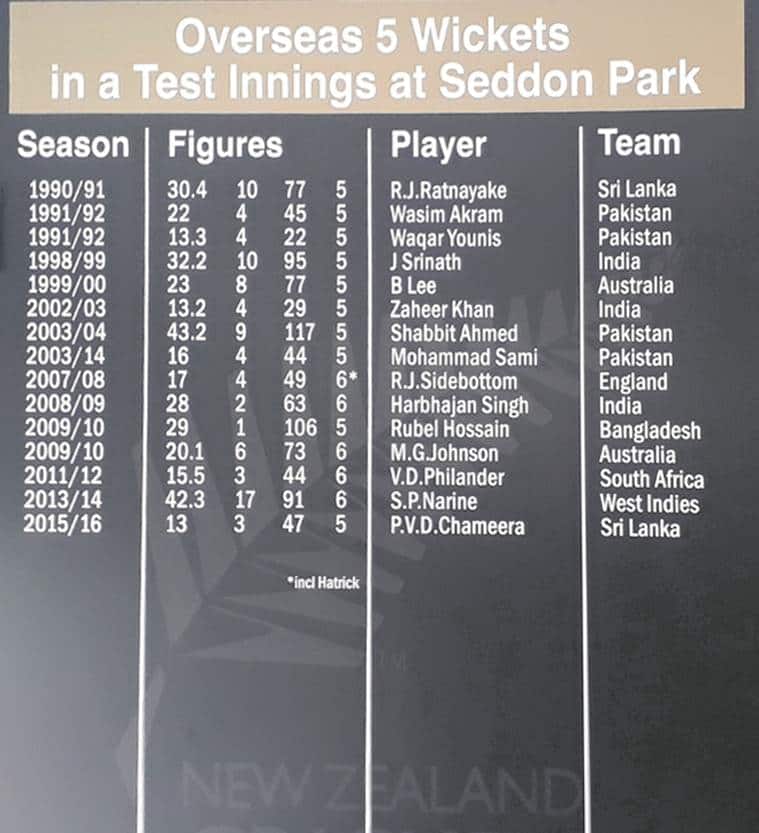 The honours board at Seddon Park. (Photos: Sandip G)

The away dressing room is a lovely but tiny box, resembling a matchbox from the distance. For an entire squad, it could be suffocating. Two large tables occupy the two corners of the room, making the room look tinier. On the wall is the honours board. The list of Test centurions is heavily populated by Bangladeshi batsmen. Five entries, four batsmen. Mahmadullah would roll the pitch back home — he has scored two Tests hundreds and an ODI century here. So could Rahul Dravid and Asanka Gurusinha, both of whom piled back-to-back centuries. The list of bowlers, too, has a huge subcontinental presence — nine of the 15. But there’s a strange name: Shabbit Ahmed: 43.2-9-117-5. Turns out to be Shabbir Ahmed, a medium pacer whose career ended after being called for an illegal action.More typo: TM Dilsan.