A smooth, diagonal run-up, and then a delightfully looping — and awfully tempting – delivery. It’s easy to get it wrong. When leg-spinner Poonam Yadav stepped up in the 10th over of India’s opener against hosts and defending champions Australia in the women’s T20 World Cup, her fourth ball was clobbered over long-on for a six by the in-form batswoman Alyssa Healy.

She wasn’t perturbed. Yadav had been around long enough, she isn’t afraid of giving the ball air. It’s a tactic that has helped her stand at No. 7 in the ICC ODI rankings, 12th in T20s. And it would help her on the day as well. All that was needed was a drop in pace — even as low as around the 50 kmph mark. In the fastest format of the game, the slowest deliveries were the most telling.

So slow was the pace, masked perfectly with the flight, that at times the ball barely reached the batters’ boot laces. With no elevation, the hard-hitting Australians couldn’t play their usual heaves over the ropes. They also struggled to time their shots. Time and again the bat would be swung before the ball them.

On one occasion, Yadav bowled Ashleigh Gardner, but the ball was deemed illegal since it bounced twice before hitting the stumps. But she still came up with a match-winning spell, taking four wickets for 19 runs. The 28-year-old helped India defend its score of 132/4 by playing a pivotal role in the visitors bowling Australia out for 115.

“These are the conditions she thrives in. It’s her favourite format. Playing big hitters on pitches that aren’t exactly favourable to bowlers,” says her coach Manoj Kushwah. “When India touched 120 runs while batting, I knew that 50 percent of the match would not be decided by Poonam. She’s a wicket-taking bowler, she read the conditions and she knew how to break the Australian batters.”

Yadav’s first wicket was half-centurion Healy, on a delivery that was clocked at 63 kmph – her last wicket was measured at 58 kmph. After the match, Yadav was seen chatting with former India leg-spinner Narendra Hirwani, a consultant with the women’s team. Between the two, they had figured out a plan for the Australians.

Killing the pace on the ball meant batswomen – who in this format are used to the ball coming onto the bat well, and can use the pace to generate power – would have to work even harder to get any purchase in their shots. But Yadav was not going to let the settle. As soon as she felt the batswoman was getting used to her speed, rather, the lack of it, she’d toss up a faster delivery to throw her off. 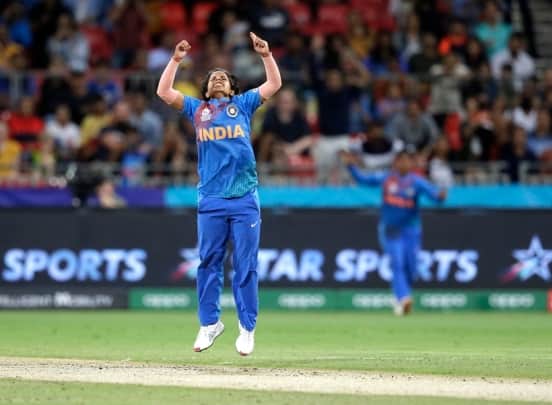 The 28-year-old helped India defend its score of 132/4 by playing a pivotal role in the visitors bowling Australia out for 115.

“That’s just how she’s been. She likes to mix up the pace, put in so much variation that the batter just can’t figure out what’s coming next. Sometimes it’ll be a faster ball, sometimes a googly, sometimes so slow they completely miss it,” Kushwah says. “She knows what her strengths are, and she’s worked hard to perfect it.”

And she had plenty of time to prepare for this moment.

A fracture to the ring finger of her non-bowling hand had kept her out of action for around six weeks. A surgery was required, and Kushwah remembers his ward getting nervous before the medical procedure. But once the operation was done, and the plaster safely fitted, she was ready to get back into training.

“She was back in the nets, practicing her bowling, doing the cardio work, basically everything she would normally do except for things that needed her to use her left hand,” the coach adds. “With the plaster on, she was training and preparing. She wanted to be there for the World Cup.”

During that phase, she planned her tactics for the World Cup game against the defending champions. The slow, tantalising yet lethal bowling style has made her the world’s highest wicket-taker (39) for the past two years, and now the player of the match in the World Cup opener. For her father, retired army subedar, Raghuvir Singh Yadav, this is where his daughter was destined to be. She became the first woman cricketer from the state to win the Arjuna Award.

Born in Agra, the leg-spinner always had the “junoon” for cricket, practicing with the boys in the open spaces near home, playing through the constant taunting that “girl’s shouldn’t play cricket” from passers-by. In time though, she’d captain the Uttar Pradesh U-19 team, and become the first woman cricketer from the state to win the Arjuna Award. There was a moment though, when she wanted to quit the game.

“She had gone for a trial for the regional team but did not bowl too well and didn’t get selected. She was upset and wanted to quit,” recalls her father. “I had met some of her coaches in the past and they had told me that ‘yeh ladki ek din India ke liye khelegi.’ That was the only thought in my mind when she said that, so I tried to encourage her to carry on.”

That single thought fueled the family’s desire to see Yadav become the first professional sportsperson from the family, for Yadav to don the national colours, and to make an impact for her team.

And she did just that, slowly.

England agree to handshake as Australia go on charm offensive