Shared News| February 22, 2020 8:37:18 am
Prithvi Shaw looked assured in his short stay; Cheteshwar Pujara was stable and Mayank Agarwal settled in. The last two soaked 42 and 84 balls, they’re reputed to carry on from there. But it wasn’t to be.

Virat Kohli walks after he was dismissed by Kyle Jamieson on Day 1 of the first Test between India and New Zealand at the Basin Reserve in Wellington. (AP Photo)

The groundsmen at Basin Reserve hate rain, for they have to sprint nearly 90m and drag the tarpaulin over the square as fast as possible, defying the devilish northerly that can knock you off the ground. The most difficult part of their job is to fasten the edges of the tarpaulin to the ground. “Every time you think you have fastened it, the cover blows off, and then we have to run behind it again. It’s bloody hard work, it blows your lid off,” shrieks a groundsman.

In a sense, it’s symbolic of batting in New Zealand, where the usual method of getting your eye in and tucking in the runs prescribed elsewhere is not foolproof. For, in these shores, a batsman is never really in, no matter how long he had batter or how assured he had looked. When you think you have countered and mastered the conditions and bowlers, neutered the new ball, you get a scorcher from nowhere. It’s true that in cricket, a good ball can snare a batsman at any time of the day, but in New Zealand, the incidence rate is higher than elsewhere.

It’s different from the first days in the subcontinent, where the batsmen need to survive the first 30 minutes and then pile on the runs. Or most grounds in Australia or South Africa, where once the batters have dug in, runs and boundaries await them in the bounty. Or in England, where it swings and seams mostly throughout the day and naturally batsmen tend to be more cautious. It was different in Wellington, where the ball would do nothing untoward for overs on end, before, out of nowhere emerges the wreck-ball.

At various stages of the match, three of the five dismissed Indian batsmen oozed assurance, but could not kick on or avert the eventual collapse. Prithvi Shaw looked assured in his short stay; Cheteshwar Pujara was stable and Mayank Agarwal settled in. The last two soaked 42 and 84 balls, they’re reputed to carry on from there. But it wasn’t to be.

Pujara gets a jaffa Take Pujara for instance. Barring a couple of short balls outside the off-stump—one apiece from Kyle Jamieson and Trent Boult—that he unnecessarily stabbed at, he looked the most assured of Indian batsmen. Defending stoutly and leaving emphatically, he seemed in utter control from the first ball. He was past the 40-delivery mark, where a batsman usually has weathered the storm. It’s the phase when Pujara starts scanning the field for boundaries. Moreover, the strip, despite its greenish tint, was not abetting outrageous movement in the air or off the surface.

But suddenly out of nowhere, that he got a peach, full length on off-stump, angled in and held off the seam a fraction. Pujara’s only culpability was that he played the ball inside the line. Had the line been wider, he could have left the ball. Had the length been shorter, he would have had enough time to move backwards and defend. Had the delivery not seamed away, he was perfectly-positioned to defend the ball to safety. But the concoction of angle, length and seam movement defeated Pujara. All the while he had looked unperturbed.

Agarwal throws it away 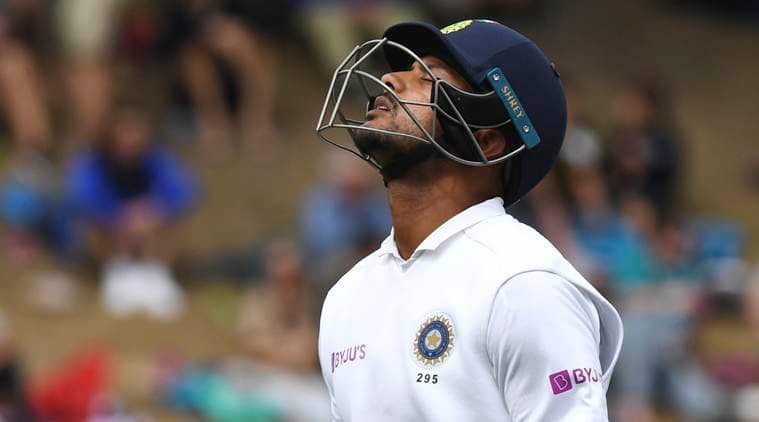 Mayank Agarwal reacts after being dismissed by Trent Boult for 34 on Day 1 of the first Test between India and New Zealand. (AP Photo)

Agarwal next. While he can only blame his injudicious shot-selection, pulling into the wind a shortish Trent Boult delivery on the leg-stump, for his eventual exit, there was a phase wherein he looked incredibly unruffled but would get beaten by a delivery that bounces or seams away more than he has been anticipating and more than he has seen hitherto from the pitch. He was stroking fluently, the drives, glances and clips were unfurled with his typical gusto, before he suddenly grew edgy at the fag end of the first session, getting squared up a couple of times and looking to drive away from the body. So disgusted was he after edging a full-length ball of Tim Southee that seamed away, he furiously admonished himself.

Like most batsmen, he was lulled into a force sense of security. You’ve defused the new-ball, faced 60-odd balls, and the time’s ripe to play some shots. Or so he would’ve thought. But he got only more tentative as his innings progressed, to a point that it started frustrating him, culminating in a self-destructive stroke. Admitted Agarwal: “As a batsman, you never felt that you were completely in because even after lunch, it was doing a little bit.”

Shaw gets a Southee special India’s Prithvi Shaw, walks from the field after he was dismissed by New Zealand’s Tim Southee during the first cricket test between India and New Zealand at the Basin Reserve in Wellington, New Zealand, Friday, Feb. 21, 2020. (AP Photo/Ross Setford)

Likewise, his fellow opener Prithvi Shaw looked in terrific touch, moving his feet well, playing beside the ball, shuffling across nicely, not pushing at the ball, until he got an outstanding delivery from Southee. A trademark Southee good-length ball that marginally seamed away. Shaw was caught on the move when looking to drive at a ball that he thought was drivable. Similarly pitched deliveries hadn’t moved prodigiously, lest he would have been more cautious. Hence, the baffled look on his face when he walked back to the pavilion.

Even the most comfortable of Indian batsmen on a blustery day, Ajinkya Rahane, would get occasionally beaten by a ripper. Nothing quite like the one Boult served to him later in the day, when he got beaten by an angled-in delivery that shaped away after landing. A little too good to snare his inside edge. It was that kind of a day, wherein neither the groundsmen nor the Indian batsmen could take the eye off the ball. It was hard work and it blew their lid off.