The win was the Rockets’ third in three meetings with the two-time defending champions this season after Golden State won a seven-game showdown last May in the Western Conference Finals.

Eric Gordon led five players in double figures with 25 points Saturday night as the Houston Rockets, playing without star James Harden, used superior depth to stun the Golden State Warriors 118-112 in Oakland, Calif. The win was the Rockets’ third in three meetings with the two-time defending champions this season after Golden State won a seven-game showdown last May in the Western Conference Finals.

This victory was accomplished without Harden, who has scored 30 or more points in 32 consecutive games, the second-longest run in NBA history. After having been bothered by a sore neck in Thursday’s loss to the Los Angeles Lakers, Harden was listed as questionable for the game even before waking up Saturday morning with what was labeled as flu-like symptoms.

The absence was just his fourth of the season. The Rockets had suffered defeats while he sat out two of his first three times. With Chris Paul (23 points, 17 assists), Kenneth Faried (20 points, 10 rebounds) and P.J. Tucker (18 points, 10 rebounds) all contributing double-doubles, the Rockets ran off to a 20-point lead in the first half and retained a 110-96 advantage after a Clint Capela hoop with 5:42 remaining.

But the Warriors, who lost Draymond Green to a sprained ankle in the fourth quarter, used 3-pointers by Kevin Durant, Klay Thompson and Stephen Curry to get within 116-112 with still 30.4 seconds to play.

Golden State had to foul, however, and Tucker iced the win with two free throws with 18.1 seconds left. Gordon, Paul and Tucker hit four 3-pointers apiece for the Rockets, who outscored Golden State 48-42 from beyond the arc en route to snapping a two-game losing streak.

Gerald Green added 10 points for Houston, while Capela had a game-high 15 rebounds to complement eight points. Durant had 29 points, Curry 25 and Thompson 20 for the Warriors, who lost for just the third time in their last 20 games. Cousins finished with a 13-point, 14-rebound double-double for Golden State, which had a five-game home winning streak snapped.

The Rockets wasted no time taking charge, scoring the game’s first 15 points. Gordon contributed a pair of 3-pointers and a layup to the crowd-silencing start.

The Warriors went 4:15 without a point, starting the game 0-for-3 on 3-pointers, 0-for-2 on two-pointers and 0-for-2 on free throws, mixing in three turnovers along the way.

A Thompson 3-pointer finally got the Warriors on the scoreboard, but that didn’t derail the Rockets, who went onto lead by as many as 16 in the first quarter and 20 in the second.

The Warriors rallied within 61-54 at halftime, then opened the second half with a 10-2 burst to take their first lead of the game at 64-63 in the third minute of the third period. Durant and Cousins had 3-pointers in the early run.

But again the Rockets responded, this time to go up by as many as nine before period’s end. 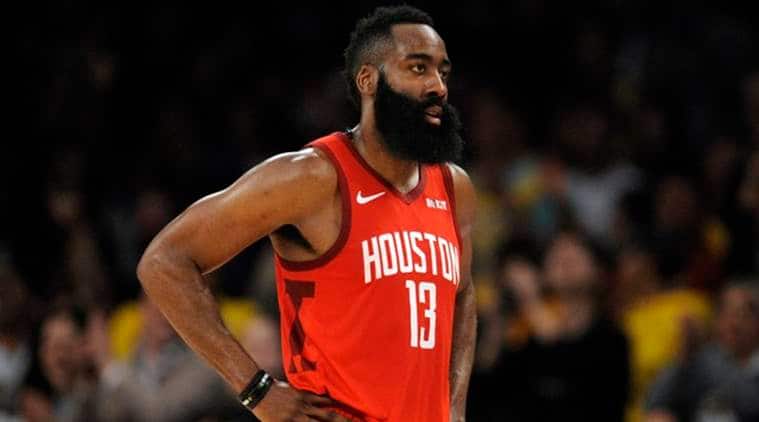 February 21, 2019; Los Angeles, CA, USA; Houston Rockets guard James Harden (13) reacts after being fouled out of the game against the Los Angeles Lakers during the second half at Staples Center. Mandatory Credit: Gary A. Vasquez-USA TODAY Sports

Houston Rockets star guard James Harden was fined $25,000 for publicly criticizing referee Scott Foster after a game earlier this week, the NBA announced on Saturday. Harden was upset with the officiating during Houston’s 111-106 loss to the Los Angeles Lakers on Thursday. He fouled out with 1:24 left when he was called for his fourth offensive foul of the game.

Although referee Michael Smith called the sixth foul, Foster was the target of Harden’s blistering postgame comments. “Scott Foster, man. I never really talk about officiating or anything like that, but just rude and arrogant,” Harden told reporters. “I mean, you aren’t able to talk to him throughout the course of the game, and it’s like, how do you build that relationship with officials? And it’s not even that call (on the sixth foul). It’s just who he is on that floor.

“It’s pretty frustrating. And I’m probably going to get hit (with a fine), but honestly, I don’t really say anything. I’m a pretty quiet guy, to myself, but it’s one of those things where you can’t voice your opinion. You can’t have a conversation with someone that’s officiating the game. You’re getting a tech. It’s pretty sad.”

Harden scored 30 points in that contest to increase his streak of 30-point scoring efforts to 32 games, the second longest in NBA history behind Hall of Famer Wilt Chamberlain’s 65-game run.

The Rockets have a showdown with the Golden State Warriors on Saturday night, but Harden is questionable due to a cervical neck strain. Harden, the reigning NBA MVP, is averaging a league-leading 36.5 points this season.