This will be the ninth occasion the rainbow nation visit the Indian shores, their first dating back to the fall of 1991–92.

After the apartheid era, South Africa returned to international cricket with its 1991 tour of India. Then Indian cricket team toured South Africa the next year and the tour was the first series to feature the concept of a third umpire.

However, during the second ODI at Port Elizabeth, a controversy erupted while India was defending a paltry total of 147. South Africa were 20/1 in 9 overs and Kapil Dev ran to bowl to the opener Kepler Wessels. As Dev came up to the stumps, he stopped and knocked off the bails at the non-striker’s end because Peter Kirsten (the half-brother of Gary Kirsten) had left the crease before the ball was released. Umpire Cyrus Mitchley gave an upset Kirsten out in keeping with the rules of the game. An angry Dev indicated to Wessels that it was the third time Kirsten had left the crease.

After the match, Kirsten said, “As much as I respect Kapil, I did not agree with what he did then.” Dev had warned Kirsten twice in the series about leaving the crease before the ball was delivered. Though Kirsten was out as per the rules, questions were raised on sportsmanship. A fuming Wessels reportedly let his bat hit Dev on the shin while taking a run, but escaped punishment. Kirsten was fined 50 per cent of his match fee for showing dissent.

In the biggest scandal to rock international cricket, the Delhi Police revealed on 7 April, 2000 that South African skipper Hansie Cronje was involved in match-fixing. Cronje was handed a life ban. Later, Herschelle Gibbs revealed that Cronje had offered him $15,000 to score less than 20 runs in the 5th ODI against India at Nagpur. He also admitted $15,000 was offered to Henry Williams to concede more than 50 runs in that same match.

Gibbs scored 74 off 53 balls and Williams injured his shoulder and couldn’t complete his second over, so neither received the $15,000.

Admitting his guilt, Cronje later said in a statement that in 1996 during the third Test in Kanpur, he was introduced to Mukesh Gupta by then captain Mohammad Azharuddin. Gupta gave Cronje $30,000 to persuade the South Africans to lose wickets on the last day to lose the match. South Africa were 127/5 chasing 460, Cronje was already out and spoke to no other players. “I had received money for doing nothing,” he said.

During the return tour, Cronje said he received $50,000 from Gupta for team information.

This sparked outrage in India and the matter was even raised in India’s parliament. Denness was termed racist and the the ICC was accused of discriminating against India. The BCCI threatened to call off its tour of South Africa unless Denness was replaced as match referee for the third Test.

Denness was replaced and the ICC declared the third Test to be an ‘unofficial’ one and classified it as a ‘friendly five-day match’. The series was officially limited to the two Tests that had already been played, with South Africa having won it 1–0. The ban on Sehwag was upheld, but the ban on Tendulkar and Ganguly was overturned.

In 2005, ahead of the India vs South Africa series, Sourav Ganguly was dropped from the ODI squad due to poor performances in previous matches. Ganguly openly blamed coach Greg Chappell for his exclusion.

When the Indian team arrived at Eden Gardens in Calcutta for the third ODI of the series, an angry crowd greeted the team bus, chanting and waving banners with anti-Chappell slogans. The coach was then accused of showing his middle finger to the crowd and cameras captured the moment. The year 2005 is known for Greg Chappell and Sourav Ganguly’s tussle. (Express Archive)

During the match, the Indian team was booed and the South African batsmen were cheered as they went on to a ten-wicket victory.

5. Kanpur pitch comes under scanner after 32 wickets fall in 3 days 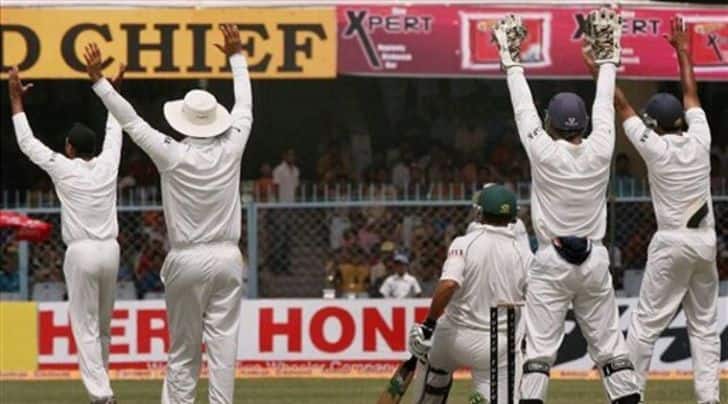 In 2008, India and South Africa were playing the third and final Test of the series at Kanpur. India won the match on the third day and levelled the series 1-1. However, the pitch which saw 32 wickets fall in three days, came under the ICC’s scanner. Proteas coach Micky Arthur alleged the track was one of the most under-prepared in the world.

Match referee Roshan Mahanama, who oversaw the Test, submitted a report to the ICC expressing his concern over the quality of the playing surface and the ICC rated the Kanpur pitch as ‘poor’.

World Cup 2019, South Africa vs New Zealand: What is the score of SA vs NZ