Shared News: July 27, 2020 1:56:55 pm
Both Jose Mourinho and Frank Lampard are in their first season in-charge of their clubs. (Source: Reuters)

In June last year, the city of London had its influence stretching from Madrid in Spain to Baku in Azerbaijan. The capital city of the United Kingdom had three European finalists: Tottenham Hotspur in the UEFA Champions League, and Chelsea and Arsenal in the UEFA Europa League.

More than 13 months, a global pandemic, and a truckload of managerial changes later, these clubs now have wholesale changes in their footballing identity to show — and with it, a drop in fortunes.

Simon Kuper and Stefan Szymanski’s acclaimed book Soccernomics claims that a team’s final table standing is correlated with how much it pays in salaries. Yet, despite Chelsea, Arsenal, and Tottenham Hotspur’s deep coffers dedicated to their global stars, their joint points total in the league has fallen from 213 points last season to just 181 points.

Chelsea managed to save their lacklustre season with a fourth-place finish after a final matchday win over Wolverhampton Wanderers. Meanwhile, Tottenham Hotspur have to make peace with a UEFA Europa League spot, which is still better than Arsenal’s empty-handed finish. Ever since Chelsea’s ever-revolving door brought in their club legend Frank Lampard as the club manager on July 4 last year, the journey has been rather topsy-turvy. The obstacles in the path of the 42-year-old were multiple — handling the departure of Eden Hazard and manoeuvring the club through a transfer embargo.

With no new faces, apart from Christian Pulisic coming into Stamford Bridge, academy graduates like Tammy Abraham, Mason Mount, Fikayo Tomori, and Reece James broke into the London club’s first team. A new-look Chelsea found itself in uncharted territory after they managed to win just two of their opening six league matches, kicking off the season with a 4-0 hammering at the hands of Manchester United.

? "It means a great deal, we have to be careful getting too excited with top 4 finishes"

Frank Lampard on finishing 4th in his first season pic.twitter.com/zWe85HJdZY

From there, their form picked up in cup matches and even in the UEFA Champions League, but the occasional losses to mid-table clubs like West Ham United, Bournemouth, Southampton, and Sheffield United meant the team couldn’t find any consistency. Kepa Arrizabalaga’s confounding performances in between the sticks often overshadowed the brilliance of Mateo Kovacic and even Olivier Giroud.

Despite Chelsea’s erratic form with holes in their defence, the Blues maintained their spot in the top-four as sides like Manchester United, Arsenal, and Tottenham had struggles of their own throughout the season. With hopes of progressing to the quarter-finals of the UEFA Champions League all but over after their 3-0 thrashing by Bayern Munich in the first leg, Chelsea’s focus is now on the FA Cup final against Arsenal on August 1. 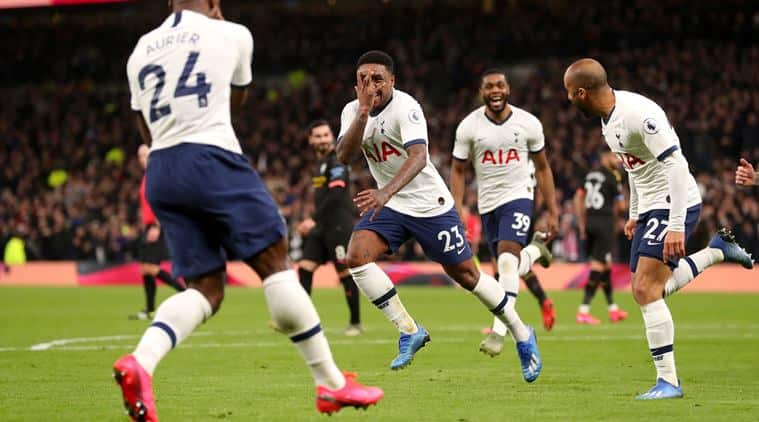 Out of the three clubs, Tottenham Hotspur’s slump in the 2019/20 season has been the most eye-catching — from being UEFA Champions League runners-up to struggling to qualify for the Europa League on the final matchday of the season

Even with a club-record signing in Tanguy Ndombele and shrewd signings in Ryan Sessegnon and Giovani Lo Celso, Tottenham’s first season in their multi-billion stadium suffered with an underwhelming start, their team had just three wins in their opening 12 matches and an embarrassing 7-2 defeat to Bayern Munich.

Then, Jose Mourinho came in to take charge after the 1-1 draw against Sheffield United on November 9, ending Mauricio Pochettino’s 290-game tenure at Spurs. The controversial Portuguese brought about a change in the system, the players, and their fortunes improved somewhat at the start of his tenure, but the team had collapsed by the time football reached a pause in March.

? "The season was crazy, it's been up and down"

Without the services of Harry Kane, Son Heung-min, and Moussa Sissoko, Mourinho’s men were winless in the last six matches before the league’s suspension which also saw the Spurs being eliminated from UEFA Champions League by RB Leipzig, and from the FA Cup by Norwich City.

But after the post-pandemic restart, Spurs were firing on all cylinders, losing just once in 11 matches and securing a consolation prize by qualifying for the UEFA Europa League. What remains to be seen is whether Mourinho can retain Kane at the club and just how the “serial winner” plans to launch an unexpected title challenge next season. With a manager being sacked, a record signing coming in, a captain being stripped of his armband mid-season, and a humiliating European exit, it’s certainly been a roller-coaster season for the Gunners.

Unai Emery led the club to a fifth-placed finish and the Europa League final last season, but his poor showing got him sacked in November last year. Even though Arsenal had a fairly satisfactory start to the season, their winless run which stretched from October to December got the management to reel in their former midfielder Mikel Arteta as manager on December 20.

The ex-Manchester City assistant manager added steel to the side and started well in his tenure, defeating Manchester United 2-0 at the Emirates in January. Under him, Arsenal managed to stay unbeaten in the league in 2020 until the restart, but the overwhelming number of draws didn’t help the side climb up the table.

Although their Europa League campaign ended at the hands of Olympiacos, the light at the end of the tunnel for the north-London side was how effectively the Spaniard has incorporated youth — Bukayo Saka, Gabriel Martinelli, Joe Willock, Reiss Nelson, and Eddie Nketiah — into a Mesut Ozil-less team. Now, the FA Cup final awaits.

Torch relay for Tokyo Olympics kicks off its 121-day journey