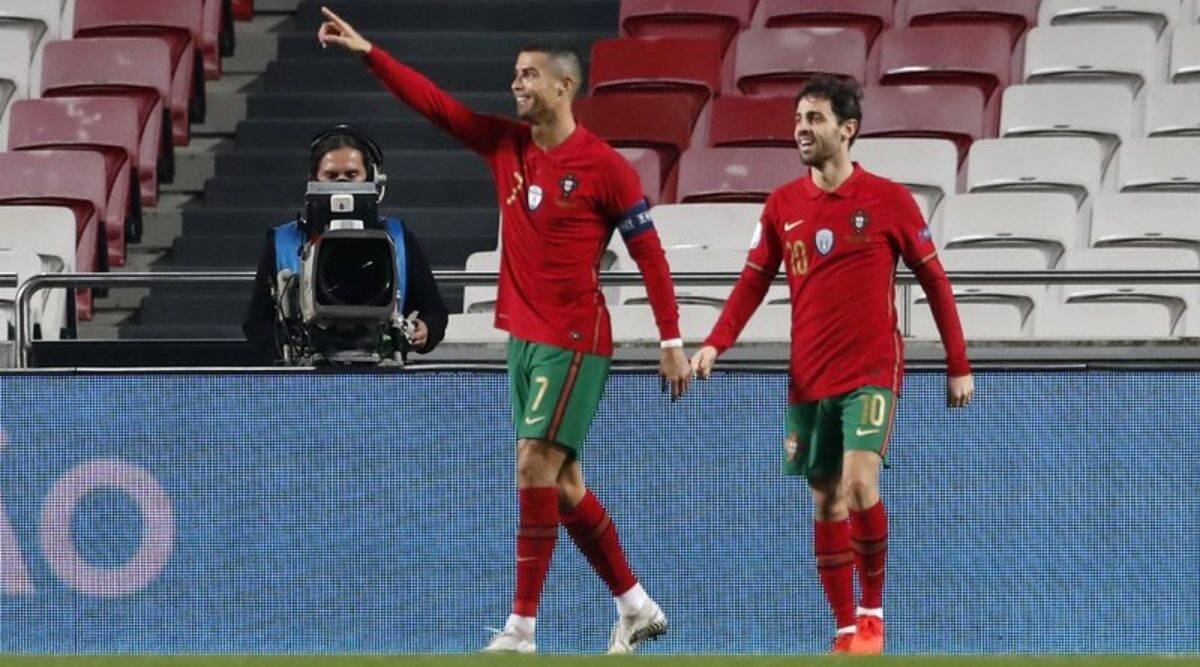 Cristiano Ronaldo scored once in Portugal’s 7-0 rout of Andorra in a friendly on Wednesday, moving a step closer to becoming the all-time top scorer for a national team. Ronaldo reached 102 goals with Portugal to sit seven shy of the 109 scored by former Iran striker Ali Daei, the only other male soccer player to surpass the 100-goal milestone for a national team. Ronaldo broke the century mark after scoring twice in Portugal’s Nations League win over Sweden in October.

Coming off a minor knee injury and having recently been sidelined by a positive COVID-19 result, Ronaldo entered the match after halftime at the Stadium of Light in Lisbon. He made it 6-0 with a close-range header in the 85th minute after having squandered a few good chances.

He had replaced Pedro Neto, the 20-year-old Wolverhampton forward who was making his national team debut and opened the scoring for Portugal in the eighth minute. Paulinho, who was also making his Portugal debut, added to the lead in the 29th and Renato Sanches scored in the 56th.
https://youtu.be/vjRhWnLZ0lY
Paulinho scored again in the 61st, and an own-goal by Andorra’s Emili Garcia in the 76th made it 5-0. João Félix closed the scoring in the final minutes.

Portugal also had a goal disallowed by offside in the 71st.

Portugal hosts France on Saturday in the Nations League, then visits Croatia on Tuesday. It trails Group B leader Ukraine by three points entering its final two matches in the European competition.

Finland stunned World Cup winner France 2-0 in a friendly as the hosts were punished for missing a number of chances.

First-half goals from winger Marcus Forss and striker Onni Valakari gave the Finns an unexpected win, which had looked even more unlikely after France carved open the visiting defence early on.

Forward Marcus Thuram, the son of Lilian Thuram, could have made a scoring debut at Stade de France, where his father netted the only two goals of his long international career in the World Cup semifinal against Croatia in 1998.

Thuram almost scored with his first chance for France when he headed against the crossbar from close range in the 16th minute. Two minutes later, Thuram volleyed over another good opportunity from close range and tried his luck with a speculative curling shot a few minutes later.
https://youtu.be/I_QozdsBHdU
With Thuram probing down the left and combining well with striker Wissam Ben Yedder, the French looked in total control only to concede twice in quick succession.

After midfielder Moussa Sissoko gave the ball away in the 28th, Forss charged into the penalty area and finished confidently with a driving shot. Three minutes later, the Valakari curled a shot past goalkeeper Steve Mandanda from the edge of the penalty area.

Lucas Waldschmidt’s early goal was enough for an inexperienced Germany team to beat the Czech Republic 1-0 in their friendly game on Wednesday.

Germany goalkeeper Kevin Trapp made a late save to deny Matěj Vydra an equalizer for the visitors, who were without two players due to positive coronavirus tests. The game was played without fans to minimize the risk of infections.
https://youtu.be/npqPik24t70
Manchester City midfielder İlkay Gündoğan recovered from his COVID-19 infection to captain Germany. Regulars such as the Bayern Munich players and Real Madrid midfielder Toni Kroos were omitted for the friendly and are only joining up with the squad for the Nations League games against Ukraine in Leipzig on Saturday and Spain in Seville on Nov. 17.

Donny van de Beek put his Manchester United troubles behind him to score the equalizer as the Netherlands came from a goal down to draw 1-1 with Spain in a friendly at the Johan Cruyff Arena.

Van de Beek has struggled to establish himself as a first-team player in Manchester but felt right at home back at the stadium where he rose to prominence with Ajax as he drilled a low shot past Unai Simon in the 47th minute.
It was a fourth match in charge without a win for Netherlands coach Frank de Boer, whose record is now a loss and three draws.
https://youtu.be/jWr_Xriw9Fk
Spain had taken the lead in the 19th minute when Sergio Canales scored his first international goal.

The match was a repeat of the 2010 World Cup final in Johannesburg that Spain won 1-0 thanks to an extra-time goal by Andres Iniesta. It also pitted former Barcelona teammates Luis Enrique and De Boer against one another as national team coaches.

Alvaro Morata, who has scored three goals in his last three matches with Juventus, turned provider for Spain’s opening goal. He turned away from Frenkie de Jong and Daley Blind before passing to Canales, who had time and room to calmly slide a low, left-foot shot past Marco Bizot, who was making his debut in the Dutch goal at age 29.

Leuven (Belgium), Nov 12 (AP) Striker Michy Batshuayi scored twice to help a makeshift Belgium side come from behind to beat Switzerland 2-1 in a friendly game.

Italy’s Vincenzo Grifo, second left, celebrates with teammates after scoring his side’s first goal. (AP Photo) Vincenzo Grifo scored his first two goals for Italy in a 4-0 win over Estonia in a friendly as the host won comfortably despite missing a number of players and its coach because of coronavirus infections. Federico Bernardeschi also scored in the first half, while Riccardo Orsolini converted a penalty four minutes from time. Italy was without coach Roberto Mancini and several players because of the coronavirus.

Players from six clubs – Fiorentina, Genoa, Inter Milan, Lazio, Roma and Sassuolo – were self-isolating because of COVID-19 cases in their squads. They will join the rest of the Azzurri squad when allowed to do so by their local health authorities. That was why Mancini named an enlarged squad of 41 players.

Mancini himself was self-isolating in his home in Rome after testing positive for the virus on Friday and was replaced by assistant coach Alberigo Evani.

After the friendly against Estonia, Italy then plays its final two UEFA Nations League group matches at home against Poland on Sunday and at Bosnia-Herzegovina three days later.